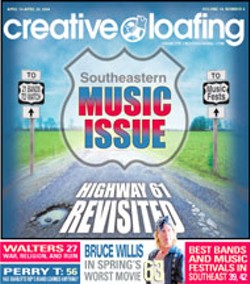 Who is this guy, strutting around the joint, talking shit in a voice like a bass trombone, practically drowning out David Lee Durham's blues band? The man is tall, balding, beefy, pot-bellied, glassy-eyed and white, and he acts like he owns the place. He doesn't. Mary Shepard has been the proprietor of Club Ebony in Indianola, Miss., for 30 years. She's a compact, serious woman who stands vigil over the small Sunday night crowd, mostly African-American, mostly middle-aged. Still, she gives this good ol' boy a wide berth. Everyone does.

Turns out he's Walter Pitts, owner of a 13,000-acre cotton farm nearby. He is, for all intents and purposes, the local plantation owner. He's been here 10 minutes and I already dislike him.

And that's a surprise, "cause I've liked most everyone during my first four days of a weeklong trip spent zigzagging around Mississippi to take the temperature of the blues in its most celebrated birthplace. I'm joined by Charles Farrell, brilliant pianist, intrepid road dog and avowed cynic. We've discovered that a press card, a pearl-white Cadillac and, at times, our white skin brings privilege amid the Mississippi blues scene.

I'm feeling good and boisterous, having thrown back several beers on the drive down and drained the flask of vodka I smuggled into Club Ebony. I'm now drinking some of bartender Jimmy's homemade wine with a splash of gin on top.

I don't give a fuck how many acres Walt owns; he'll get no deference from me. I quiz him on his wealth. He seems a little irritated.

Then Walt puts down his own personal drinking cup -- everyone else makes do with small plastic ones -- and starts waddle-dancing with Carlene Johnson, a weathered black woman with big, bony hands who likes to drink and shake her body on the dancefloor. From the looks of their banter, she and Walt seem to know each other quite well.

When Walt takes a breath, I escort Carlene directly to the front of the bar, where we commence to getting funky, shimmying and shaking and using my sport jacket as a prop. We get smiles from the band and a smattering of cheers from the crowd.

Back at the table, Walt bellows, "Whut wuzzat?"

"That was me showing you how to dance," I say.

"Tell you what," I say, my voice rising. "Let's have a dance-off, right in this club right now! You go 15 seconds and I'll go 15 seconds! Winner by applause!"

Walt looks up. "By applause?" he replies smugly. "Hell, I'll win that."

I smile. I get his meaning. The game is rigged. We're both white, but what chance do I have against the local plantation owner?

David Lee Durham, the hardworking bandleader on stage, mows yards during the day and plays a lot like B. B. King -- high praise in Indianola, where the legendary bluesman was born. Guys like Durham have spent a lifetime in the shadow of whites like Walters, whether it was working the land for a plantation owner -- as many elder bluesmen have -- or trying to hold their own against corrupt record companies, conniving managers and snaky promoters.

But then, that's just part of the blues.

The U.S. Senate decreed Feb. 1, 2003, to Feb. 1, 2004, "The Year of the Blues." In honor of that, we wanted to find out how the root of all roots music -- the music that had a baby and they called it rock "n' roll; the foundation of funk, soul and hip-hop -- was faring. Is the blues, birthed by oppressed people as a tool of defiance and survival, still relevant to Mississippi life? Is the blues ailing? Is it holding its own? What's on the horizon?

To find out, we put some heavy miles on the Caddy, hopscotching to towns that are the holy places of blues lore, hanging out in juke joints and roadhouses, on street corners and in musicians' homes. We passed up museums and the graves of dead musicians. This was not a historical dig, but a sojourn to examine the blues as it exists today -- and to get a sense of what the future might hold.

The blues in Mississippi is not just music. It's a dicey cultural construct influenced by myriad agendas and subtly tinted by race politics.

There are the power brokers who see the blues as a basis for transforming Mississippi's economy from agriculture to tourism. There are the academics and preservationists who write tomes, hold symposiums and want to improve signage at gravesites and other landmarks. There are the blues societies, run mostly by white folk who seem to revere the music but often lack a real feel for it. There are special people like Roger Stolle, who left a lucrative marketing job in St. Louis to open a store called Cat Head Delta Blues and Folk Art in Clarksdale; with his website and connections, he's become an informal clearinghouse for blues music throughout the state. And there's Fat Possum Records, an indie label founded in Oxford, Miss., a decade ago by a young white kid named Matthew Johnson, that's trying to do right by the musicians but finding it increasingly draining.