Who Crapped in the Sand Box? 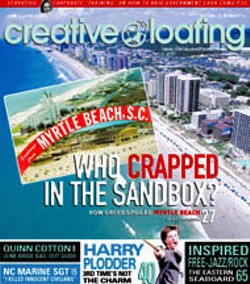 It was years in the planning, consisted of 24,740 cubic yards of concrete, 6,924 tons of structural steel and sprawled across more than a million square feet of earth. And it was surrounded by 6,073 asphalt parking spaces, where just a few years ago had been wetlands and forest.

In the first four and a half hours of its grand opening, on March 17, more than 35,000 people came to Coastal Grand Myrtle Beach Mall. Among them were South Carolina Gov. Mark Sanford and other state officials, including officers of the Burroughs & Chapin Co., the mall's developer.

Even before its conception, the mall was controversial. In the early 1990s, B&C bulldozers moved in and discreetly went about ditching and draining the vast tract of Horry County land near the Intracoastal Waterway. By 1998, when B&C announced plans for its mega-mall, the land was sufficiently drained. Only an acre of wetland remained and B&C was allowed to destroy that through a mitigation agreement with state environmental authorities.

B&C next called for the creation of a vast "business park," one of South Carolina's many economic incentive schemes to reward companies for doing business in the state. Under the terms of B&C's business park plan, the company would be allowed to raid the Horry County School District for the money to build infrastructure for its new mall and other projects. The audacious plan divided the county, filled the pages of the local newspaper with vitriolic letters to the editor, and reduced county council meetings to rounds of spiteful shouting and name-calling.

Even in the last stages of construction the mall sparked new controversy. Coastal Grand Mall promised to draw thousands of additional cars each day to what was already one of the most congested intersections in the state. When the state Department of Transportation announced plans to install a traffic light at the mall entrance on the bypass, it sparked a grassroots uprising among residents who traveled the bypass on their daily commutes. Letters poured in to the newspaper and a website (www.stopthelight.com) was created to channel the public fury. Citizens complained all the way to the Governor's Office. But the light went up, traffic congealed around the mall on grand opening day and, after years of screaming and thrashing, the whole project was brought off with the grim inevitability of a constrictor swallowing a rat.

It was yet another notch in the belt of Burroughs & Chapin CEO Doug Wendel. In 11 stormy years at the helm of B&C, this was his greatest triumph. At his side, Gov. Sanford intoned, "This is the essence of a great physical monument to the importance of tourism to the entire state."

Station Wagon Memories
Before there were malls and bypasses and traffic jams that stretched for miles in the simmering summer heat, there was the beach -- a magnificent 90-mile arc of sand stretching from Winyah Bay in South Carolina to the Cape Fear River in North Carolina. In the 1950s, this was the place where I discovered the vast, gray Atlantic Ocean, standing on a sweep of sand almost as empty as a desert.

Each summer my family loaded up the Ford station wagon and headed from our drab Piedmont mill town to an exotic place where the music played all night, where people talked a little louder and couples clung a little closer and a seven-year-old could stand on the beach at midday and almost see the far side of the world. I remember walking with my family down that beach to a tidal creek, where we spent the day crabbing with chicken necks on strings and dip nets in hand. At the end of the day, we walked back to the rented house and boiled our catch on the kitchen stove, broke open our feast over newspapers and considered ourselves the luckiest people in South Carolina.

We spent our nights listening to the surf from open windows and screened porches, for those were the only air conditioning. I had spent my young life living and sleeping to the monotonous drone of a cotton mill across the street. From our beachfront house I could hear something eternal and transcendent in the breaking of waves along the shore -- something I've never forgotten.

The most magic evening of each vacation was the night my father loaded us into the station wagon and we headed off to the Pavilion. That's the Pavilion Amusement Park, to be formal, but for millions it's simply The Pavilion. There I tasted cotton candy for the first time. I wandered through the Fun House, and my younger brother and I rode the famous Pavilion carousel.

But the most daring enterprise was the Ferris wheel. With my father between us, my brother and I would enter the tiny swinging carriage and gasp as the bar was closed and locked in front of us. We slowly moved backward and upward, as one carriage after another took on its passengers. Then the lever was thrown and we were cast into the night, 40 feet above the ground -- though it seemed like 100 -- 40 feet above the lights and the noise and the heads of the multitude below, 40 feet above the world, the highest I had ever been off the ground, 40 feet to scream and squeal and pray as our carriage plunged down through the summer night and began the arc back up to the heights.

More by WILL MOREDOCK