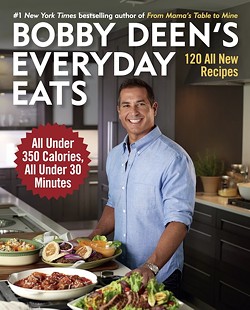 When: Wed., Feb. 19, 7 p.m. 2014
Price: Free admission
Growing up with a Southern-fried fanatic like mama Paula Deen, Bobby Deen has followed in her foodie footsteps, but on a different route that calls for less salt, sugar and overall fat. Bobby fancied his mother’s cooking so much he decided to recreate it without the massive calories. His latest book, Bobby Deen’s Everyday Eats: 120 All-New Recipes, All Under 350 Calories, All Under 30 Minutes, was released in early February. Now, we don’t deny this isn’t all one big, family-friendly biz, but it’s nice to see some concern and effort being made about living a healthy lifestyle. Bobby makes a stop in the Q.C. on his current book tour. (Anita Overcash)