The growing popularity of a simple food 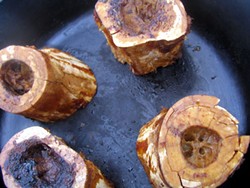 For longer than there have been kitchens, people have found ways to boil bones. From rural villages to urban restaurants to grandma's house, the virtues of bone stock, and its salted cousin broth, are hardly a secret. But lately, bone broth has boomed into a trendy end in itself. You can pay nearly 10 bucks for ginger grassfed beef broth at Brodo in New York. You can drink it at the Jola Cafe in Portland, Oregon. It's available online, shipped fresh to your doorstep.

Outside Magazine calls bone broth the ultimate sports recovery drink, and the New York Times recently declared it the new coconut water. Los Angeles Lakers star Kobe Bryant credits regular consumption of bone broth for helping him recover from some serious recent injuries. In fact, according to the Washington Post, practically the whole team has been on bone juice since the 2012/2013 season.

If you've ever been lifted from the depths of exhaustion, hunger, illness or chills by a sip of warm broth, you might be inclined to believe in such restorative powers.

Indeed, bone broth is a wonderful thing. But there are some potential downsides to broth, as well as some misconceptions, that are worth keeping in mind.

While broth is often touted as a great source of calcium, supposedly it isn't. More concerning, if bones from the wrong animal are used, broth could be a source of lead exposure. Lead can accumulate in plants and animals that are exposed to it via food, water or a contaminated environment. As a self-defense mechanism, exposed animals store lead in their bones, where it does less harm. Broth made from such bones could be high in lead.

Sally Fallon and Kaayla Daniel, authors of the book Nourishing Broth, addressed this in an extensive blog post for the Weston A. Price Foundation. They have issues with many aspects of how the study was conducted, including suspicions that the chickens used were exceptionally contaminated. Still, they acknowledge, bones should be chosen with care, because contaminated bones do exist.

Using organic bones wouldn't help one avoid this problem, as evidenced by the fact organic bones were used in the study. In fact, organic products could contain more heavy metals than conventionally-grown food, because of the use of manure in many organic agriculture practices. Manure can be a concentrated source of heavy metal contamination. If lead-tainted manure were used, for example, to grow animal feed, that lead will end up in the animals that eat it.

Amazingly, while lead will leave the bones for the broth, calcium does not, they write. I contacted Daniel to confirm that this bomb they dropped is legit.

She responded that they've examined data from numerous batches of tested broth. "Every batch tested has shown low levels so it stays in the bone most likely."

Given how long stock bones spend dissolving in the hot water, it makes no sense to me that particles of calcium-rich material wouldn't be consumed along with broth. But assuming it's true, Daniel pointed out a simple fix to this calcium void: add veggies, which do contribute the calcium.

"Bone broth builds bones, and the likely reason is it's high in gelatin — collagen. And collagen is what provides the framework for good bones. That's what's needed to lay on calcium and other minerals. It's like rebar and concrete."

There are many variations on bone broth, with a diversity of finished outcomes attached to each. Vietnamese pho, made from cow bones, is very different from Japanese tonkatsu ramen broth made from pork bone, or veal bone-based demi-glace in a fancy French restaurant, or mom-style chicken bone soup. Thus, I'll leave you with, not a recipe, but:

A slow cooker is a great brothing device for many reasons. Using one isn't as dangerous as leaving a stove burner on for days at a time, and the broth cooks slowly enough that you don't need to keep adding water. It's very convenient to have a crock pot going at all times with broth that's at the perfect sipping temperature, and available to be used in whatever's cooking. If the stir-fry is drying out, add a ladle of broth. Looking to make a soup or sauce? Use broth as a base.

The bones should be cut, which releases the marrow and other inner bone materials, and allows more surface area to contact the broth. When I make stock with the bones of a store-roasted chicken (lead alert!) I use a scissors to snip the soft bones to bits. With mammal long bones, ideally the butcher will cut them, otherwise cut them at home, or whack them with a hammer.

If whacking the bones, make sure that the resulting bone splinters don't enter anyone's mouth-unless cooked to absolute softness. Some people simmer their bones in a fine mesh bag to keep them out, or pour the finished broth through a sieve. In my case the broth just sits in warm mode in the crockpot. The bones settle, and as long as I use a ladle to serve it there's no danger of bone fragments.

I usually use deer, cow and chicken bones. Lamb and goat are good too, but be warned they make a gamier broth.

For best flavor, begin by roasting the bones in the broiler, turning them as necessary, aiming to brown but not burn. Add the bones to the stock pot, and make sure to deglaze and scrape the roasted bone drippings into the pot as well. Cook on the lowest setting you've got.

After about 12 hours, consider adding carrots, onions and celery. Don't get too fancy with your veggies; broccoli and cabbage will backfire if cooked too long, so use these and other calcium rich veggies to make soup with, after the broth is done.

Leave the broth unsalted in the pot until it's time to use it. Then, season appropriately.If sipping, I like a splash of soy and a sprinkle of garlic powder.