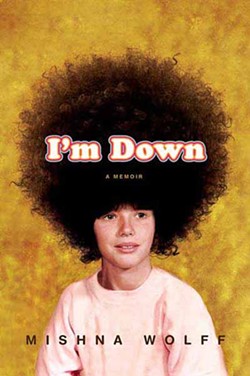 So you think you felt out of place while you were growing up? Read Mishna Wolff's memoir, I'm Down, and you'll get a lot broader perspective on just how odd "not fitting in" can be. Wolff grew up in the early 1980s in Seattle with her father, a white man who lived his life as if he were black, and wanted -- no, expected -- her to "act black," too.

"He strutted around with a short perm, a Cosby-esque sweater, gold chains and a Kangol -- telling jokes like Redd Foxx, and giving advice like Jesse Jackson," Wolff writes. "You couldn't tell my father he was white. Believe me, I tried."

Her dad, a frustrated, and frankly confusing, anti-establishment guy, divorced Mishna's mother, a white, doctrinaire leftist hippie (for lack of a better term), took custody of Mishna and her younger sister, and moved to a poverty-riddled African-American neighborhood. From roughly the ages of 9 through 14, Mishna stuck out in their neighborhood like a, well, like a little white girl in a black neighborhood. It was rough, as Mishna tried to fit in while enduring hundreds of insults a day, e.g., being called a "marshmallow turd." Her dad's response to her problems was to give her grief for not fitting in well enough, not being "black enough," and not being "tough enough." She finally works her way through the daily traumas by learning the art of trading insults and being witty.

As soon as Mishna starts to get halfway comfortable with being the new Queen Smartass of her school and neighborhood, her mother shows up again, and places her in a very upscale white school on the other side of town. Now she really doesn't fit in: None of her new schoolmates want to hang out with a smartassed, insult-slinging chick who'll fight at the drop of a hat -- fighting is the ultimate uncool thing at the new school, whereas it was an accepted statement of power in the old one. Back at home with Dad and whichever of his here-today-gone-tomorrow black girlfriends is present, Mishna is criticized for supposedly being pretentious and thinking she's better than the kids in the neighborhood. She winds up not only not fitting in among schoolmates and neighbors, she winds up not even fitting into her own family, living in the middle of one of the worst cases of "damned if you do and damned if you don't" this writer has ever heard of.

Obviously, much of Wolff's tale is painful -- for example, being punished for taking part in a pretend "satanic rite" at a party by being made to join a basketball team, playing against hard-hitting amazons -- but she wraps her angst in so many jokes and asides, and an almost gleeful sarcasm, her troubles are easily digested by the reader. I found myself thinking at times of Richard Pryor and how he used his godawful upbringing as fodder for his hilarious art. Wolff may not be at Pryor's level -- hey, who is? -- but she's definitely working similar ground.

These days, Wolff makes a living as an actor-comedian. Reading I'm Down, it's easy to see where she got her gritty, snarky and smart sense of humor; it's called survival. For some people, cracking jokes isn't just about being funny -- it's a way to get through tough times, or even a tough life. Wolff needed every bit of wit, sarcasm and personal grit to make it through her odd, divided childhood and adolescence, and in the long run, due to her inner strength and perseverance, the confusing mess that was her childhood seems to have paid off. Her memoir is a searing but funny look at the differences between the poor and the middle class, and between black and white culture and mores. In the end, she uses her painful, admittedly kind of ridiculous youth and transcends all the divisions, in her own way, while introducing readers to a funny new talent.

I'm Down by Mishna Wolff