Few writers who have brought a script to the Broadway stage have also had a major acting role in a blockbuster Hollywood film. Mae West, Orson Welles, Sam Shepard, Mel Brooks, Maya Angelou and Woody Allen have legitimate claims. Perhaps the stealthiest addition to this very short list happened this summer when Danai Gurira emerged in the Marvel universe as Okoye, the spear-wielding generalissimo of Wakanda in Black Panther. You'll look long and far for a review that reminds us that Gurira's Eclipsed not only came to Broadway in 2016, it scooped up six Tony Award nominations, including one for Best Play.

Of course, the record was set straight when Panther became a megahit and Gurira, already a star of The Walking Dead series on AMC, rose even higher in the firmament. Feature stories about Gurira consistently cited Eclipsed among her accomplishments. Additional light reflected back on Eclipsed from Lupita Nyong'o, the glam spy of Panther. Nyong'o was nominated for a Tony as the leading lady in Gurira's play after her Oscar-winning performance in 12 Years a Slave.

You won't find any zombies at Duke Energy Theater, but connections between Black Panther and Eclipsed are substantial. Both dramas are set in Africa. While Wakanda is a fantastical high-tech kingdom in Marvel geography, Gurira's Liberia is quite real — but no less dramatic. After spending a good chunk of her childhood in Zimbabwe, Gurira returned to the continent on a grant from the prestigious Theatre Communications Group in 2007 and interviewed more than 30 women who had been victimized by Liberia's civil war.

From these women — some of whom were serially raped, others' daughters had been kidnapped and turned into sex slaves — Gurira took four of their names for her characters. In the play, three are wives of the unseen character, Commanding Officer, a brutal leader of the rebellion against president Charles Taylor, and the other is a peace activist seeking to bring the war to an end.

The fifth woman, at the heart of this drama, is unnamed. "The Girl" is CO's most recent captive, and two of his wives, Helena and Bessie, are hoping to shield her from him. 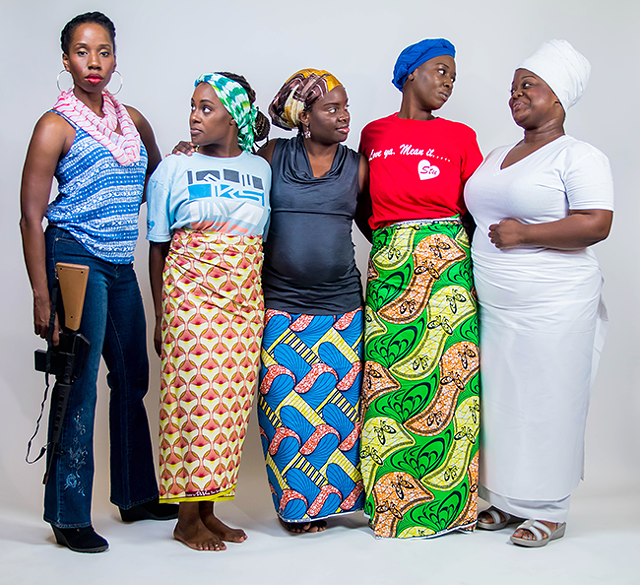 Yes, Eclipsed was the first play to hit Broadway with an all-black female cast. Just don't get the idea that Gurira's script is all about victimhood and peacemaking. CO's other wife, Maima, is a freedom fighter with the Liberian rebels, and she returns from the battlefield with some serious weaponry strapped to her shoulder.

Maima is not only an action figure vaguely akin to Okoye in Black Panther, she's modeled after Col. Black Diamond, a female Liberian freedom fighter. Gurira saw a picture of the warrior in a New York Times feature in 2003, the year that the Second Liberian Civil War ended. Black Diamond was the inspiration for Gurira's mission to Liberia — and for Eclipsed. The way Maima sees it, men aren't going to rape you if you're toting an AK-47.

That's where actress Tracie Frank comes in. A self-confessed "blerd," (black nerd) she knew about Marvel and Black Panther long before she knew about Eclipsed, and she knew Gurira as Okoye before she realized that the film's action hero was also playwright. She has played major roles around town in A Trip to Bountiful and the title role of Caroline, or Change. But nothing like Wife No. 2, Maima. 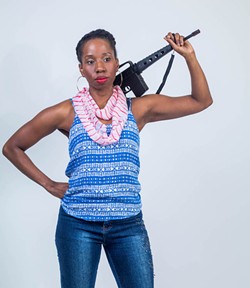 "Truthfully, I didn't even see myself in that role when it did come along," Frank admits. "As I read the script to prep for the audition, I decided to read for the two 'motherly' roles. I remember absently thinking, 'Wow, whoever plays Maima will have to be tough!'"

"I was surprised," Frank recalls, "but I went out and read her again — not as an impartial observer, but as a version of myself ... and I knew it was right. I guess I feel like Wife No. 2 chose me."

So did Abdullah, who returned to Charlotte's theater scene last year after a five-year hiatus from directing. A co-founder of Carolina Actors Studio Theatre with Ed Gilweit, Abdullah was no longer at the core of CAST when the company folded in 2014, but she was devastated by the loss. Corlis Hayes shoved a life raft toward her when she directed August Wilson's Jitney for BNS last summer, asking Abdullah to design the costumes.

That gig positioned her for Eclipsed. Another BNS blerd, Abdullah has been on board as a Black Panther fan before the film but only slightly acquainted with Eclipsed because of the Nyong'o connection. After researching the story, she knew this was the project to get her back into directing.

"As you might remember," Abdullah says, "I am not one to shy away from difficult subject matter. This play gave me all the complications a human spirit could endure and still survive. It is about women and their courage to survive under the worst circumstances that life could hand them. It is also based on real stories of the Liberian civil wars, which made it more compelling for me."

Away from the scene for five years, Abdullah had grown out of touch with the local talent that would show up for auditions. Three of her five choices — Toni Oliver as Helena, Racquel Ena Mae Nadhiri as Bessie, and Gbale Allen as The Girl — are new to the Charlotte scene. Aside from Frank, Ruby Edwards as Rita, the peace negotiator, will be the only familiar face.

"All of the women had a special quality about them that make me want to look at them on stage," Abdullah recalls. "Tracie has a power that came across much more grounded than the others. Her character makes a choice that takes her on a much more difficult journey than the other women — I needed someone who could convey that energy while staying grounded in truth. The Girl is the only character that goes through a transformation during the course of the play. Gbale gave the innocence as well as the confident toughness that this character needed to pull this role."

Getting the roles was just the beginning of this ensemble's journey. Casting by Abdullah was done four months in advance, with rehearsals beginning in late April, so the performers could research the culture, learn the civil war history, bond with one another and learn a Liberian accent. Oh yeah, there's also some footage online of Frank and Allen wielding their firearms.

"Dee has been quite unique," Frank affirms, "and I can't imagine anyone else directing this play. She's intuitive and observant — she sees what's under the surface — and that's vital in a story like this one."

Abdullah is pleased with the dedication her cast has put into their work, and Frank believes the results will show.

"There's a natural rhythm to our interactions," she explains, "one that comes from knowing each other, caring for each other, being annoyed by one another! We've formed a sisterhood that won't end when the [show] closes on September 1st. We've learned and experienced so much over this spring and summer. It has been unforgettable."