Georgia-born Playwright Reappraises Carter in the Age of Trump

A presidency worth more than peanuts 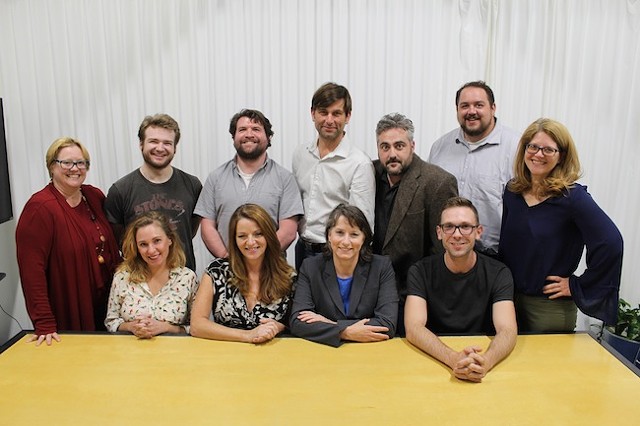 Oceans are rising. California keeps burning. Women are still facing stalkers, abusers, detractors and depressed wages. Innocent black people are beaten and shot in the back by rogue cops — or point blank by vigilantes. Wouldn't it be great to be led by a president who cares? While Obama nostalgia and Hillary regrets may be keenest at the moment, all other past commanders-in-chief and presidential hopefuls — except maybe Bush 43 — seem more palatable alternatives than the racist boor who now sits so empty-headedly at his empty Oval Office desk.

Even Jimmy Carter? Why yes, says playwright Susan Lambert Hatem, whose Confidence (and The Speech) premieres at Duke Energy Theater on Friday, September 7. Growing up in Decatur, Georgia, a three-hour drive from the famed Plains presidential peanut farm, Hatem has been fascinated by the Carter presidency and his exceptional post-presidency since childhood. Her impulse to revisit Carter began before the 2016 election.

Among Carter's signature achievements were establishing the Departments of Education and Energy and successfully bringing Israeli prime minister Menachem Begin and Egyptian president Anwar Sadat together to the peace table for the Camp David Accords. Hatem has made a pilgrimage to attend Carter's Sunday preaching at his Plains church and has extensively researched the record.

"He appointed more women justices and more minority justices than all previous administrations — put together," she points out. "Carter paved the way to something. There is no Obama presidency without Carter's presidency. His administration never dropped a bomb. Never started a war. Eight American soldiers were killed on his watch."

When Confidence began taking shape in 2015, Hatem had good reason to expect that she would also be able to claim that Carter's presidency paved the way to Hillary Clinton. Equipped with sound theatrical sense, Hatem knew that showing Carter establishing government agencies or appointing women and minorities wasn't a dramatic pathway to resuscitating his stature.

Instead, she decided to focus on his pivotal "Crisis of Confidence" speech in 1979 addressing America's energy crisis. She learned that Carter cancelled the energy address he had originally scheduled for July Fourth and sequestered himself at Camp David for 10 days before emerging with what Hatem calls "The Speech." Those 10 days were an attempt to change the course of our history. 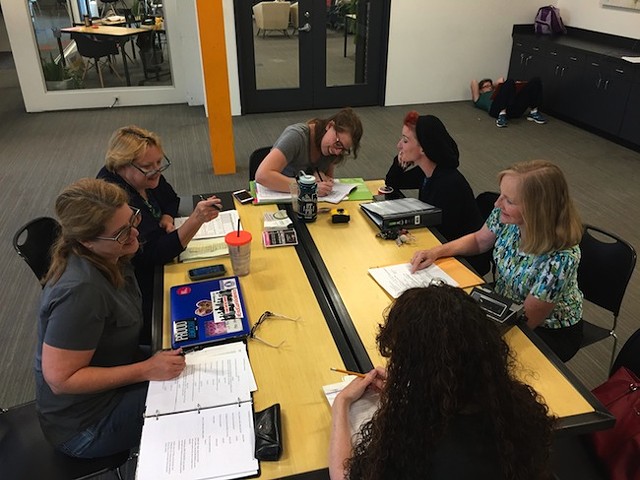 "I discovered that the initial reaction to that speech was intensely positive," Hatem recalls. "It was the best public reaction to a speech the White House had ever seen — there were phone calls and letters praising the speech. Later, the speech was used against him and became known as the 'malaise' speech — though he never said malaise."

Before moving into his policy decisions and recommendations, Carter described an ingathering and reaching out.

"I invited to Camp David people from almost every segment of our society," he told the nationwide TV audience, "business and labor, teachers and preachers, governors, mayors and private citizens. And then I left Camp David to listen to other Americans, men and women like you. It has been an extraordinary 10 days, and I want to share with you what I've heard."

Hatem not only examines the domestic summit that Carter held at Camp David, she flips the script with her narrative structure. Young Jonathan Rollins approaches 60-year-old college professor Cynthia Cooper, a former Carter aide, and asks her to recall the leadup to the "Crisis of Confidence" speech. Cooper consents — on condition that Young Jonathan plays Young Cynthia in the retelling. Professor Cooper will play President Carter.

Why? Because Hatem is not just interested in how history is made. She's concerned with who gets to make it. Set in 2019, when President Hillary would presumably declare her candidacy for a second term, Confidence (and The Speech) would be a look back at how we began to evolve toward this landmark of feminist progress.

"After the 2016 election — I didn't know what to do," Hatem admits. "I had to put the play down for a bit. I couldn't work on it. I didn't know how the play would make any sense any more. Then January 2017 was the Woman's March, and I was re-inspired. I knew I had to finish it. So many women were stepping up. So many LGBTQ activists. So many black women and men. So many voices were rising. I wrote a new ending — a cathartic ending to me. An ending that I think will excite some, and confuse others. It is purposefully somewhat ambiguous ... and not."

The road from re-inspiration to this week's Charlotte premiere ran through Hatem's sister, Anne Lambert, who already had two significant production projects in the works during 2017. Last summer, she was on the producing team at Children's Theatre of Charlotte that presented a staged reading of Bend in the Road, a musical adaption of the beloved Anne of Green Gables. Then in late fall, Lambert's own company, Charlotte's Off-Broadway, presented a fully professional local premiere of Richard Greenberg's Three Days of Rain. 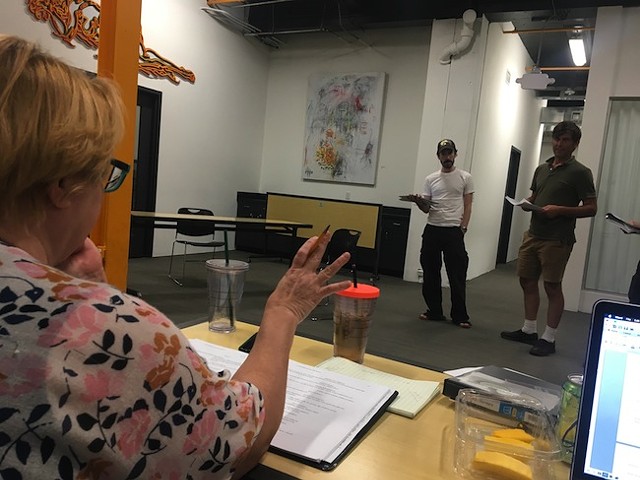 Lambert had co-founded the all-female Chickspeare theater troupe at a local brewery 20 years ago, so her sister's gender-bending concept was right up her alley. Confidence was one of six plays that were read at Camp North End this past winter as part of the Charlotte's Off-Broadway "Page to Stage 2018" series. Of the six works read script-in-hand from February through March, Hatem's will mark the third to receive a full production.

This time around, Lambert is wearing two hats: producing and directing. Hatem especially values her sister's experience with dark Shakespearean plays — where the Chickspeare gender-bending wasn't done for cheap laughs or sexual effect.

"What I'm trying to do is explore how the cross-gendering can reveal another layer to the play's themes," says Hatem. "That's where Anne and her direction have been so great." 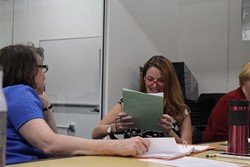 The Lambert Sisters tapped Josephine Hall for the challenging roles of Professor Cooper and President Carter — in an unusual three-way FaceTime audition with the playwright in L.A., the producer in Charlotte, and their star in Greensboro. We haven't seen Hall in a local production since she prowled Stonewall Street in Cougar: The Musical, the last of three Actor's Theatre appearances during the 2014-15 season. Though she teaches acting and voice at Greensboro College, Hall hasn't totally disappeared from view. Some of us saw her at Belk Theater when the first national tour of The Curious Incident of the Dog in the Night-Time came to town in February 2017.

Hatem knew some people who had worked with Hall on that tour, and Lambert had been impressed with her performance in Vanya and Sonya and Masha and Spike at Actor's Theatre. You could say they were pre-sold before they hooked up via their iPhones.

After starring as the discontented daughter of a former Reagan ambassador in the 2014 Actor's Theatre production of Other Desert Cities, you also might say that Hall was serendipitously unsold on President Ronald Reagan. The Hollywood actor successfully pinned the malaise label on Carter's watershed speech and wrested the presidency from him in 1980.

"I believe The Speech is a missed opportunity," Hall says after living with it through months of study and rehearsals. "Most people — not just Americans — don't want to think too deeply or like to change their daily habits. Carter was asking for both. It's really no wonder that most people chose the 'all is well, just spend more' approach offered by Reaganomics. It is very sad, however. I try to imagine a world where America had paid attention and led the world down a more sustainable path."