Brooklyn's A Place to Bury Strangers loves it loud

The sonic barrage has allegedly induced the premature labor of one fan, caused seizures in others. 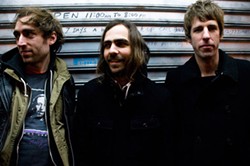 In their concert-going lifetimes, rock fans will experience plenty of "don't bother yelling, I can't hear you" performances. After all, a lot of bands enjoy jacking the volume until it rattles foundations and threatens their fans' hearing — it's all just another middle finger to common sense that's come to define rock 'n' roll rebellion. If your ears aren't ringing, the logic goes, you weren't at a rock concert.

You and your aural pathways will definitely know when you've been to an A Place to Bury Strangers show. The Brooklyn trio's website motto is "Total Sonic Annihilation," and its sonic assault has earned the group the title of "New York's loudest band." The stories, real or apocryphal, bear that out: the band designs its own earplugs and sells them at shows; the guitarist runs a pedal company called Death By Audio; APTBS gigs have been shut down for noise ordinance violations and blown power sources; listeners have complained, a few have suffered seizures and the sonic barrage allegedly induced the premature labor of one fan.

"It's pretty nuts," guitarist and singer Oliver Ackermann concedes. "We don't intend for people to go into seizures, but sometimes the shows are pretty intense. I feel pretty bad when it's happened, though."

Anything shy of the seizure-point, though, APTBS is A-OK with. For the band, which plays Tremont Music Hall's Casbah stage on July 25, magic happens when the volume maxes out. Still, distinctions should be made. The trio doesn't make hardcore punk-meets-industrial electronic terror-noise a la Wolf Eyes, or play chest cavity-caving Marshall stack-athons like the Who was once known for, before its members suffered debilitating and permanent hearing loss.

A Place to Bury Strangers crafts luscious melodies that echo forebears such as the Jesus & Mary Chain and My Bloody Valentine, and juxtaposes those with sonic maelstroms and Joy Division-inspired rhythmic propulsion.

"When we're playing shows, we'll send our instruments — with extreme volume — into crazy places where you don't even know what the heck is going to happen," says Ackermann. "You can't predict what's going to happen, you just have to be there and turn it into what you want and can at that moment. To create something that's unpredictable, and playing with this kind of raw energy or raw power, is awesome. It's like an uncontrollable beast that you're constantly trying to come to grips with."

Ackermann, who is the only remaining original member from a band that played its first gig in 2003, says the maximum-volume aesthetic goes back to his years growing up in Fredericksburg, Va. Being roughly an hour from the nearest relevant venues in Richmond and Washington, D.C., and prior to the ubiquitous-Internet era, music was still a luxury. Formative gigs for Ackermann included watching fellow volume-knob enthusiasts like Mogwai and Dinosaur Jr., though the real learning curve began when he got into guitarists who were "making it not sound like a guitar," and learned to push the sonic envelope himself.

"Like when you first get an electric guitar and an amplifier and your parents are out of town or something, and you crank up the amp so loud it starts to rumble the house," Ackermann fondly remembers.

In 2002, Ackermann founded his effects pedals business, which furthered his sonic explorations. His clients range from My Bloody Valentine's Kevin Shields and U2's The Edge to Lou Reed and Wilco's Jeff Tweedy. But Ackermann's aesthetic blossomed in APTBS, where a darker, more ominous sound palette predominates.

For the band's third and latest full-length release, Worship, Ackermann and new bassist Dion Lunadon generated the lion's share of noise in a year and a half of writing sessions that resulted in almost 50 songs. After scrapping original drummer Jason Weilmeister's tracks, the two turned to five different drummers to complete the 11-song LP. Still, taking their time, adding new blood and self-producing haven't changed APTBS's sound, only honed it.

"I've never thought of myself as a very good guitar player," Ackermann says, "it's really about the sound and what you can do with the sound. Once you realize that the possibilities are endless, it's really awesome." And, he might've added, often really, really loud.