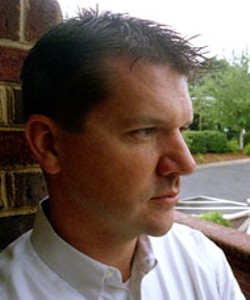 In these days of DNA sampling and detailed crime scene investigation, it's hard to imagine that there are still such things as unsolved murders. But they happen, more than we want to think about. A "cold case" (a case that remains unsolved) -- especially if it's a murder -- leaves family and friends frustrated by many unanswered questions. While some police departments have cold case task forces, many, especially small departments, can't afford it.

Several years ago, Tom Morgan, a Charlotte resident, turned his frustration with his sister's unsolved murder into a screenplay. Starting in mid-September, Fourth Ward Productions began turning his script into a movie.

The Murder
Morgan's screenplay, titled Brothers, is based on the true story of the November 1994 death of his sister Jennifer Anne Morgan in Florence, SC.

"My sister Jennifer was murdered one month before she was supposed to have graduated from Frances Marion University," Morgan says. He explains that due to a lack of off-campus apartments, she shared a mobile home near the campus with a friend. "She was killed in her trailer at around 10 o'clock in the morning, her body was doused in gasoline and she was burned beyond recognition. There was an investigation that was done for a while and they say it's ongoing, but it's probably not."

According to Morgan, the police first told the family that her death was probably an accident. An early account in the Myrtle Beach Sun News quotes Florence County Coroner M.G. Matthews as saying "foul play is not suspected in the death."

However, Morgan says that it was Matthews who also "insisted that an autopsy be done" because he told them, Morgan says, that, "something's not right about this fire." He adds, "The police department wasn't going to do an autopsy."

The autopsy revealed that no smoke was in her lungs -- meaning of course that she died prior to the fire. Further investigation revealed that the fire had probably been set to cover up the murder.

No one has ever been charged in the case and it remains open. The sadness comes through in his voice as Morgan continues. "It'll be 10 years this November -- the 10-year anniversary of her death."

"And really I started writing the screenplay because there was no closure to the story," he says. He pauses and continues, "The basis of the screenplay is not typical in that it's from the other point of view. I thought to myself at the time, how could somebody do this to my sister? And then, under what circumstances could someone rationalize such a thing?"

As Morgan was pursuing this line of thought, he talked about it with a friend. "You know, he said, things happen," Morgan continues. "People go out and get drunk and they hit somebody -- it could happen to somebody like you or I, where in that one second you panic, and you make a bad decision and then you make another bad decision -- a series of bad decisions to cover it up."

He shakes his head, "And that's kind of the take of the screenplay -- from the perspective of the killer, the person who killed my sister."

Once he wrote it, he says, he "threw it in a drawer." Later, though, an old childhood friend Joey Albright, who is now an actor, read it, and gave it to his friend, actor Jeff Daniels of Dumb and Dumber fame. Daniels, Morgan reports, liked the script and gave him some tips on how to improve it. "And I realized," Morgan continues, "how much I liked writing and what a great escape it was for me. And how I like the way you can craft these stories and go back and tear it all apart and change it. It was very therapeutic at the time. Then it just kind of grew to this point. I had a number of opportunities to do something with it (the screenplay), and they just never quite panned out or we were always waiting for one more thing."

Then a year or so ago, Morgan met John Schwert, who read the screenplay and wanted to direct it. Morgan thought it was a good fit because at that point both were first timers.

"In a strange way," he says, "this is kind of what my sister would have wanted. She was always rooting for the underdog. So it just felt like the right time and the right situation, so we put it together, and we'll see how it goes. I hope for the very best. I think it's in very capable hands -- he's (Schwert) a smart guy and very dedicated and we'll see what happens."

The Movie
In the big space at Extravaganza Depot, the props and events facility on N. Tryon Street, the people who are making the film look more likely to be attending a formal fraternity party/dance than staging one. The youthful energy in the room is palpable. Despite the serious subject of murder, it's a happy set, too -- people smile and laugh a lot as they wait between takes. Extras swarm around to watch scenes being filmed. In fact, the day I visited the set, the first assistant director, Jason King, had to ask everyone to move further back because they were having trouble with the sound. Even though everyone was trying hard to be quiet, stray sounds kept filtering through.

Director John Schwert remembers when he first met Tom Morgan through friends and then read the script. "When I first read it, the fact that it's a personal story really intrigued me and that it was somebody I knew's personal story -- that was even more intriguing to me."

He continues, "Reading through the original story, just the way it was crafted, was very well done -- very non-mainstream Hollywood, in terms of the end of the story, there's no resolution. The antithesis of most films you see these days from Hollywood and whatnot."

Schwert says Brothers is the fourth film he's worked on this year. "I directed a film called The After Hours, which is a 30-minute short, back in January of this year." He also worked on The Rest of Your Life, another film done in Charlotte recently by Captain Obvious Productions.

He adds with a big smile, "This is the biggest script I've ever done, it's a 130 page script -- the biggest project I've ever produced and directed. So it's been a real challenge, but it's been great."

Schwert and his Fourth Ward Productions crew have been filming at some 13 locations in and around Charlotte, which he says has been great. Moviegoers can watch for scenes filmed at The Corner Pub, Casco Bay, Queens University and the Great Aunt Stella Center.

Schwert says he wants to use the film festival circuit to try to create a buzz for the film. "The more I watch the dailies and go through it," he says, "the more I realize that we're really getting a high production value look on this film -- we're using a lot of tracking shots, a lot of dolly shots, a lot of jib shots.

"We have people come on the set and they're really impressed by the $24,000 budget we're shooting this on -- of the type of shots, of the type of people, of the type of talent, the type of crew we're getting," he continues. "My initial thought was to -- I don't really want to just go right to a studio and sell it to them. They could sit on the story and not distribute it; they could do whatever they want with it.

"I'd rather create a little buzz by way of festivals -- try to get the word out through the festival circuit -- hopefully get into a Sundance or one of the larger festivals like that next year, 2005. That would be ideal, and hopefully, (the film would) get picked up from there. But I wouldn't be against...plan sort of D is self distribution."

Schwert is very enthusiastic about his cast and crew. "The cast is phenomenal. All my crew is pretty much from the Carolina area. To do it justice really, I think you have to cast local people and local talent."

While blond Lauren Schneider doesn't look too much like photos of the dark-haired Jennifer, she does project youthful energy and enthusiasm. A Myers Park High School and UNC-Chapel Hill grad, Lauren now lives in Los Angeles. Brothers is her third feature. She explains that she was in Charlotte in July to work on the feature The Rest of Your Life, when she met director Schwert.

Two of the other principal actors, Matt Mercer and Corey Cicci, are old friends of Lauren -- they all went through the UNC theater program. "It's great to do a project with friends," Lauren says with a big smile.

But she's also serious about this film. "Sometimes we forget it's based on a real story. But maybe by making the movie, we can help. Maybe whoever did this will think about it more, maybe it will force them to confess."

Mercer plays Ethan, a character created by Morgan for the story. Ethan is the guy who makes a series of bad decisions to cover up his actions. "He's the guy I was trying to identify with," Morgan explains.

Mercer's dark good looks lend themselves to this complex role. His expressive face helps bring to life a character who can be serious, look innocent and in the blink of an eye, turn a bit cruel. In real life, Matt's friendly face lights up as he talks about the project. "John's the most balanced director I've every worked with," he says. "He knows how to get down to business. Yet he is open to letting us explore options in our characters."

Mercer now lives in New York City but says that while he grew up mostly in Virginia, he went to Providence High School here in Charlotte. "I get scripts often from friends -- but this one was way better than most of the ones I get," he says. "The characters were so well drawn."

Daniel Watts says playing Billy, Ethan's fraternity brother and most loyal friend, is a real challenge. The Indian Trail resident describes himself as an extrovert but explains that his character is an introvert. "It's cool that it's based on a true story," he says, adding that it is another challenge to keep true to "as much as we know of the story."

Brothers is Watts' first film and the Elon University grad is planning to move to Florida in October to do musical theater.

Full Circle
When Tom talks about Jennifer, it's obvious he misses her. She was the youngest of four children; Tom was next to the oldest. "Of the four of us, we were the most alike," he says and smiles. "I think she'd be proud. It's one of those things where you hope that something good comes from something so tragic. And I don't mean something good like you make a lot of money."

He turns serious again. "I mean something good like it kind of keeps her story alive or there's other people who can relate to the story. Or maybe it just leads somebody to say, jeez, you know, I know something about...whether it be her murder or somebody else's murder...and that person comes forward. She was very ambitious; she would have been hugely successful. So you kind of hope that in her spirit...I would have never tried to write anything, had I not had this happen."

Lindsey Grossman contributed to this story.