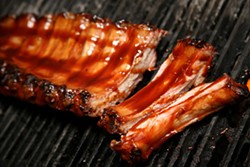 Barbecue, like Southern accents, changes with geography. On the eastern side of North Carolina, pit masters cook the whole hog and jazz it up with a vinegary sauce. In Lexington and the Piedmont, shoulders shine with a thin tomato sauce. (Some aficionados refer to this sauce as "light tomato.") A slightly heavier tomato-based sauce appears in eateries towards the Carolina mountains, Virginia, Georgia, Tennessee, and Alabama. In the Carolinas, the thickly sweet, crowd-pleasing sauce of the Midwest is primarily found at corporate chains.

In addition to these sauces, South Carolina also has the mustard-based sauce common around Colombia, a descendent of recipes created by early German settlers. But for most of the Palmetto state, barbecue is sauced by the vinegar and pepper sauce.

This spicy vinegar sauce is a modern take on what was possibly the original barbecue sauce. Shortly after the Spaniards dropped off the first pig in the Carolinas during the 1500s, coastal residents cooked up a sauce of vinegar, salt, red and black pepper, and oyster juice. Nowadays the oyster juice has been dropped and more peppers, typically dried, have been added.

Barbecue fans will travel just about anywhere for a good sandwich or plate of ribs; so here is one just across the state line. 521 BBQ & Grill opened on, not surprisingly, Highway 521 in Indian Land, S.C. in August 2005. Even though this was only a few years ago, Indian Land was just becoming a bedroom suburb of Charlotte. Today, 521 BBQ is surrounded by the burgeoning Sun City Carolina Lakes Retirement Center and pricey residential developments (offshoots of Ballantyne only five miles away).

Owner and pit master Mike Dial's personal story is one that's becoming common in the barbecue business. Barbecue houses established during the depression or just after WWII were handed down through the family. Today, with the advent of national barbecue contests or the urgings of friends and families, some amateur grill masters have converted their passion into a business.

This is the case for Dial. After retiring from the U.S. Navy, he worked for a company that entertained during the Winston Cup races. Dial was in charge of the barbecue for these events. "Folks started telling me how good my barbecue was and said I should start my own place," Dial says. So he did, partnering with brother Robert Dial and Mike Melton (no relation to the famous N.C. Melton barbecue family.) Robert Dial, who works for McClancy Seasoning Company (also in Indian Land), asked his brother to try out a new dry spice mix on his barbecue. This flavorful spice rub is now made exclusively for 521 BBQ, and "Butts rubbed nightly" is emblazoned across the servers' T-shirts.

521 BBQ is located in a nondescript strip shopping center just off the highway, and because the meat is cooked in enclosed ovens, you can't smell the barbecue from outside the building. But the parking lot is teaming with cars and trucks: one sure sign that a barbecue place is worthy of a stop. Inside, picnic tables, smaller tables, even bar tables are fettered with green and red gingham tablecloths. On the back wall is a prisoner of war flag. Dial reports, "John McCain was here during the [South Carolina] primaries. We had catered an event for him at the Fort Mill VFW and then later on he came in. We gave him a tour, and he signed the [POW] flag."

Wood, especially hickory, imparts a distinct flavor that cannot be replicated over gas. This is the case with the chopped shoulder pork at 521, where meat is subtly imbued with hickory smokiness. Barbecue is accompanied by two sauces: the stellar housemade pepper-vinegar dip; or a sweeter, thicker "Memphis-styled" sauce made per Dial's specifications by a regional bottler. Rustically cut cole slaw, too, comes two ways: with or without sauce. Of note are the classic, precisely crisped hush puppies.

Succulent meat from the ribs literally falls off the bone, but Dial admits that ribs are chewier earlier in the day. "After we take them off the grill, they sit in the holding oven, which tenders them up. So if you get them earlier in the day they may give you more fight." But then later, the ribs may be sold out. Dial recommends that since they do run out quickly, if you want ribs, call ahead.

In addition to barbecue, which is also sold by the pound, the menu is rounded out by daily specials such as pork chops or chicken. Kids meals, my server said, can be ordered by anyone wanting a smaller portion. But with barbecue this good, who would want a smaller portion?

Eaters' Digest is back. Do you know of a restaurant that's opened or closed? Does your restaurant or shop have news, menu changes or new additions to staff? E-mail me!