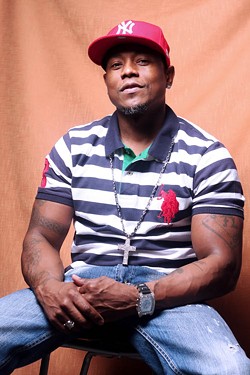 Calvin Richardson is the exact opposite of what you would think a successful, Grammy-nominated recording artist would be like. No iced-out jewelry. No entourage. No ego. He's just a down-to-earth guy with a soulful voice.

"This is just who I am," he said one afternoon while grabbing a bite to eat at Boston Market. "I've been in the industry for 10 years, and it hasn't changed me — and it's not going to change me."

But it wasn't an easy road for him. Along the way, record companies wanted him to change his signature soulful sound for a more contemporary R&B style, but he wouldn't do it. And then, he watched from the sidelines as his albums were put on hold and he bounced from label to label.

"It's because of that pressure [to sound like other R&B artists] that labels never put money behind me," he said. "They wanted me to do records like R. Kelly or records like Joe."

While taking a five-year hiatus from the industry between 2003 and 2008, Richardson launched his own label, NuMo Records, so he could take his career into his own hands. "After going through all those deals, I realized that the label has too much control over your life," he said. "If they want to take three years to put out your album, there's nothing you can do about it."

Now in control of his own destiny, Richardson, who writes his own songs, as well as songs for others, is experiencing the kind of success he knew would happen one day. He won an American Society of Composers, Authors and Publishers (ASCAP) award in 2010 for "There Goes My Baby," a song he wrote that was performed by the legendary singer Charlie Wilson. He scored two Grammy nominations in 2010 for his Facts Of Life project — and now he's up for another Grammy, this time for Best Traditional R&B Vocal Performance for the song "You're So Amazing." And he did it all without compromising who he is as an artist or as a person.

"Soul music is what I do. I don't vary from it, and I don't hide from it," he said. "You've got to have your own thing — and once you've got your own thing, that's what will keep you around."

And Richardson plans on being around for a long time, keeping soul alive through his music and through his radio show on WBAV 101.9, The Soul Sessions (co-hosted by Preston Miles), which he hopes to get syndicated one day.

"I had a vision of taking something that was a dying art and bringing it back to life, and I was able to do that," he said. "I never tried to shy away from that, and I never let anybody change who I really am."

Black History in the Making homepage