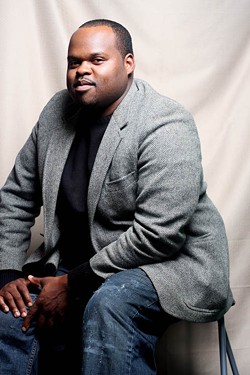 If you've seen an African-American-oriented play in Charlotte within the last three years, there's a good chance that it's thanks to Quentin "Q" Talley and his On Q Productions.

"I didn't see theater in Charlotte that represented me," said Talley, 31. "There were too many minority actors around town that were just too talented, and they weren't getting to work on a regular basis because there wasn't enough work for them. I was like, 'We're gonna have to change that.'"

So in 2007, Talley, who is also a part of the award-winning poetry crew SlamCharlotte, launched On Q Productions. With the aid of a few small grants and a strong network of actors, directors and theater workers, Talley has seen his company grow by leaps and bounds.

In the few short years that On Q has been in existence, Talley has brought classic black plays like Ntozake Shange's For Colored Girls ..., Suzan-Lori Parks' In The Blood, and Douglas Turner Ward's A Day of Absence to a city that he thought was lacking theatrical diversity. And he's found that the city was thirsty for more.

"People have been very supportive, and they want to see minority theater in Charlotte," he said. "I had many people come up to me and tell me that they appreciate what we do because a lot of black shows aren't produced ... not just here, but in a lot of cities."

The growing success of his company, however, hasn't been without obstacles — the main one being how to get new people to come to his plays.

"The ones who are die-hard about black theater always come out and support," he said. "But the struggle is, I don't think people recognize the value [of theater]. You'll go to the movies, pay $15 for a ticket, and by the end of the night you've paid $40 for two people. You can take the same amount of money and go to a show and actually meet the actors after."

People who come to Talley's shows not only get to meet the actors, but they also get injected with a dose of history.

"A lot of the plays we put on do deal with black history. It's important to show, so people see where we came from and that we're not monolithic," he said. "These stories need to be told ... they have to be told. And if we don't tell them, nobody else will."

One African-American story that Talley was determined to tell was that of jazz legends Miles Davis and John Coltrane. He teamed up with his writing group Concrete Generation, a collection of 10 local writers and poets, to write the original play. The group started writing the play back in 2006, before On Q launched, and brought the production to life in 2009. Since then, Miles & Coltrane: Blue(.) has been performed in Charlotte, as well as in New York as an off-Broadway show and in Scotland, where it sold out three shows and two shows, respectively.

When Talley talks about his plans for Miles and Coltrane: Blue(.), his cool, laid-back demeanor changes and his face fills with excitement.

"This is a show we're trying to take to Broadway," said Talley, who portrays Coltrane in the play. "It's a show that resonates with everybody, because most people know of Miles and Coltrane, even if they don't know jazz."

On Q is in its second year of residency at the Blumenthal Performing Arts Center and Talley is more focused than ever to see his company thrive now and well into the future.

"Hopefully when I'm dead and gone, On Q will still be around producing minority theater for Charlotte," he said. "That's what I want to leave behind — a good art base that tells our stories."

Black History in the Making homepage