Can Delta Rae handle the truth?

Delta Rae is a lie. Sure, the Durham outfit's lightweight folk-pop is accessible — enough so to garner a deal from major label Warner Brothers' subsidiary Sire Records. The company released the band's 2012 effort, Carry the Fire, only three years into the band's young career. But Delta Rae postures as though its merger of mainstream accessibility with traditional elements of folk and blues is somehow revelatory. 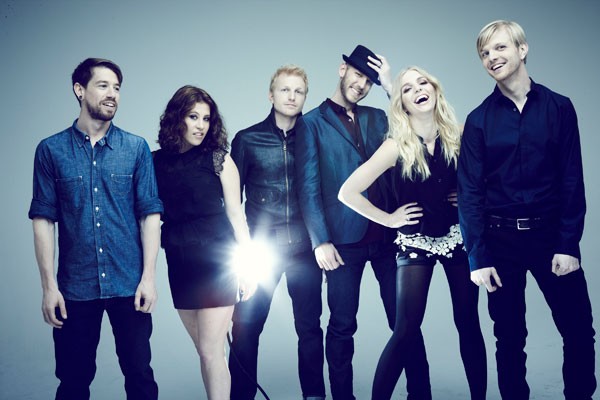 The group sets videos, namely the clip for Carry the Fire's "Bottom of the River," on plantations, simplifying complex racial histories in pursuit of shock value. Delta Rae traps its cookie-cutter pop with ragged but uninspired strums and litters it with overused symbols pilfered from the South's rich musical heritage. Thus far, the band, which will perform at the Visulite Theatre on March 9, has done a poor job of hiding these shortcomings.

Take the band's recent collaboration with Lindsey Buckingham. As pop innovators go, few have proven as ambitious or successful as Buckingham. As the guitarist for Fleetwood Mac, he helped produce the lush sound that made Rumours, in 1977, one of the most successful LPs of all time. The group's 1979 follow-up, Tusk, saw him taking total control of production, fusing the Mac's stadium pop with aggressive psychedelic flourishes and the modular style pioneered by The Beach Boys, creating a truly unique mix of contrasting elements that he has continued to refine in his subsequent solo career.

He joins Delta Rae for the radio release of "If I Loved You," a particularly uninspired bit of saccharine folk-pop from Carry the Fire. Buckingham does his best to invigorate the tune, replacing the original's placid strumming with nervy jangles that move with the Mac's lively bounce, but all this accomplishes is to highlight how cloying Delta Rae's emotional knee jerks are next to a band so profoundly dramatic as Fleetwood Mac.

The major-label success that brought on this collaboration likely sprung from North Carolina's prominence in a growing national trend. Concord's Avett Brothers, active since the beginning of the millennium, have capitalized on the creative energy of their namesake leaders and siblings, Seth and Scott Avett, injecting the traditional Carolina sounds of country and bluegrass with punk-inspired force and outsized emotions. The style struck a chord with area listeners, making the Brothers a regional favorite and eventually netting them a deal with Rick Rubin's American Recordings.

By the time the Avetts made it big, several similar outfits were also dominating the airwaves. At the head of the pack is the surprisingly British Mumford & Sons, whose most recent effort Babel was named Album of the Year at this year's Grammys. Blowing the aggressive shambles from quickly played guitars and banjos into a sound as oversized — and hollow — as their countrymen in Coldplay, Mumford & Sons suggest that America's current obsession with music that stuffs modern styles with the hallmarks of their forbears might be reaching the point of diminishing returns.

Delta Rae certainly lends credence to that notion. The band keys on the trend, but works with more obvious stylistic pairings. "Holding On to Good," which opens Carry the Fire, opts for the kind of simplistic strums and perfectly dull harmonies that dominate the mainstream-country boredom of bands like Sugarland in a feeble attempt to add new flavor to by-the-numbers piano chords and a chorus that falls far short of the stadium-sized glory to which it aspires.

Delta Rae and its handlers know what they're doing. Formed around three well-piped siblings — one of which, Brittany Hölljes, happens to be a platinum-blonde beauty — the band has a familial backstory — a publicity coup — that matches that of the Avetts. Delta Rae's songs are always well-constructed, precisely whittling down blue-eyed soul, mainstream pop and nondescript Americana until all that remains are the styles' lowest common denominators.

This should be doubly frustrating for North Carolinians. Our state is home to several bands pursuing genuinely ambitious combinations of the new and the old. Take Charlotte's Overmountain Men. Led by David Childers, an institution in Tar Heel songwriting who played with the regionally respected Modern Don Juans, the group was sparked by his collaboration with Avett Brothers bassist Bob Crawford. On the Overmountain Men's newly released sophomore effort, The Next Best Thing, they turn a modern eye toward traditional sounds. The diverse outfit dabbles in Pete Seeger-inspired folk ballads, Drive-By Truckers country-rock and moments of reverent old-time picking, allowing each style to remain distinct, basking in the variety of American music.

Accentuating this authenticity, Childers turns his luxurious baritone to very real history for lyrical inspiration. "To the Warmer Lands," for instance, tells the story of a pro-British soldier in the Battle of Kings Mountain, a Revolutionary War conflict fought in North Carolina by Childers' ancestors.

Hiss Golden Messenger, which hails from Delta Rae's Durham home base, prefers to tangle its various modern and traditional influences. Built on the earthy croon and keen songwriting of M.C. Taylor, the group's songs most often contend with spirituality. Taylor struggles to find a middle ground between his own open-minded view of Christianity and the strict tenets endorsed by a literal interpretation of the Bible. "Oh conqueror," he sings on the track "Sufferer (Love My Conqueror)," addressing his grievances with his god. "If I'm your sufferer/ Oh, I'll break every lock on every door/ And run like a thief/ Like a thief into the night/ Oh, I crave the golden sunlight." The song, a standout from the band's forthcoming album, Haw, moves with a stomping blues bass line offset by ominous strings and effect-drenched guitar. It seems at once futuristic and pastoral, mirroring the conflict in Taylor's words.

Delta Rae and a host of similar bands act as though they're mining conflicts that are just as essential and divisive, but they're more interested in cliched symbols than any real substance. Take "Dance in the Graveyards," which trots out its titular image and ideas about celebrating death as though Delta Rae is the first group to contend with this basic concept. This is a band that wants you to think it's pursuing combinations that are both daring and unique when it's really just rehashing the same inoffensive drivel, hoping you'll feel intelligent for liking something that aspires to unite the past and present. Yes, friends, Delta Rae is a lie.