Kimmery Martin will always remember the time during her general surgery internship at Carolinas Medical Center in Charlotte when she was doing her rounds in the trauma intensive care unit and realized that each patient in the unit was an adolescent male who had suffered through a car crash.

"There was a whole row of them, and they're all unconscious and they're on ventilators," she recalled. "I remember just thinking, it's heartbreaking — they're so young and so horrifically injured."

Although she went on to become an ER physician and witnessed countless tragedies during her career in Charlotte, that moment always stuck with her, she said.

It also served as inspiration for the tragic story of "Silver," a car crash victim that appears early in Martin's new book, The Queen of Hearts, which jumps in time and place between present day Charlotte and pre-Y2K Kentucky.

Like its dual settings (and dual narrator protagonists), Martin's debut novel comfortably straddles a binary, seamlessly transitioning between romantic drama and medical thriller. It's been compared to Grey's Anatomy, which thrills Martin despite the fact that she's never seen the show. The comparison, however, falls short. Martin's technical expertise and comical-but-cringeworthy representation of Charlotte's suburban upper class make for a smarter story — even if "Dr. X" does call back to "McDreamy."

I met with Martin in one of her favorite spots for writing: a balcony above the specialty cheese shop in Whole Foods Market in SouthPark to discuss what it's been like to make the move from physician to fiction writer.

Creative Loafing: It's about a week from the release of your debut novel. How are you feeling? 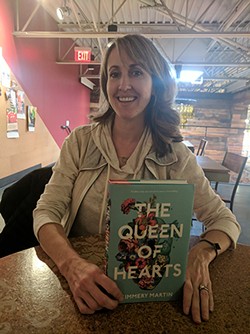 Kimmery Martin: A bit overwhelmed. We just found out the New York Times is reviewing the book. The amount of stuff to do is overwhelming, but also it's kind of intensifying as far as more people are reading it now and I'm starting to see a lot more reactions from people and that's just interesting.

I feel anxious that I have to do a lot of public speaking and that's new to me. It's also kind of like your baby is being beat in the head with a hammer sometimes when everyone has an opinion about this ting that you wrote, and that's very interesting.

You're already getting some love on Goodreads. Do you pay attention to that?

It was a long road. I started writing it five or six years ago probably. It took me nine months to get a first draft, and then I did a ton of revision because I had no writing experience and no idea how to write a book at all, which is not what I would recommend doing. The next step is to try to get a literary agent to represent you, which is a highly daunting prospect. For me, at least, it was a lesson in humility, because I sent out a ton of query letters describing my book and I got nothing but rejection for years.

I kept trying, and eventually I got some interest from an agent and I signed with a really good one. She sold the book in a matter of weeks to Penguin Random House. And then they had another two-year delay before publication.

How did a debut novel like this become so highly anticipated?

There's a ton of hurdles to get your book noticed. There are so many books published in the United States every year. A lot of it is luck of the draw — just right place, right time. For me, I think a big factor in ultimately getting published was that I wrote about something I know very well.

So I would recommend to all aspiring writers that if you are going to pitch a manuscript to somebody, you need to have something that sets you apart. Whether it's that you possess some technical expertise in the setting that you chose or there is some twists on an old trope in your book, something has to make it a little bit different to stand out in this crowd. For me it was writing about medicine, which I knew very well.

In the book, you go into great detail about the strenuous nature of residency, with 40-hour shifts and 110-hour weeks. Writing a book is also famously strenuous. How do you compare the two, now that you've done both?

But actually, I think writing in many ways is more difficult than medicine. You have this infinite universe of possibility that you have to whittle down into a coherent story, and that's so daunting, to start off with that. I do feel the sense of time famine in both fields. In the ER, I was always racing against the clock to get more people in and sometimes to save a person's life when time was running out. And with writing I'm always facing big deadlines and stuff. I feel like there's a lot of pressure in both fields.

How much of this is what people could expect if they were to go behind the scenes of a hospital, and how much is dramatized?

In terms of the romantic drama, it is definitely exaggerated in the book. But, during residency and medical school, it's kind of an incestuous time because you're not getting out a whole lot to mingle with other people. This is your social world. So there are a lot of cases of doctors dating doctors or nurses or hospital people.

But of course I amped up all the drama for the novel, and then my publishers had me rev it up even more with some revisions. So it's a little overly dramatic, but I wanted it to be entertaining.

You are very good at building up drama in a sense that you let casual conversations build up through seemingly innocent interruptions, creating subtle cliffhangers. Was that a purposeful technique you were using?

Well, I wouldn't describe myself as any kind of expert writer. I actually wrote the original novel set all in the past, in the training years, and then I went back and thought it would be more interesting to intersperse the characters' present-day lives. That in and of itself kind of led to a little bit of a cliffhanger, because you were moving back and forth in time, so there's this dual time and dual narration — because I have two main protagonists as well — and I think that led to some of the ending on an unresolved note in a lot of the chapters.

Are you still working in the medical field?

I am on hiatus from the ER, and have been for at least a year, because I decided to really focus on writing.

Do you miss it?

Oh yeah. I loved it. I may go back to it, but right now I'm enjoying writing so much that I want to focus on that for a while. I do miss it, it's a great field.

Are you working on a new book?

Yes. When I first finished this book, I switched genres and started writing a completely different kind of book. Both my agent and my publisher were like, "No. You need to stick with the same kind for a while. You can publish it, but just not yet." So I put it on the backburner, but it's really where my interest is. It's a character-driven biotech thriller.

They wanted another book with a female physician in a hospital setting, and so what I think I'm working on now is a book about a minor character in [The Queen of Hearts], one of the med school friends named Georgia.

Will that be set in Charlotte, as well?

The next one is not set in Charlotte, but it may make a cameo. And then beyond that, I don't know. I would love to set another one here. I think Charlotte is a fascinating city, and a good location for books.

What do you hope readers take away from this book?

My goal in writing it was to write something that was entertaining, but also reasonably smart. I really enjoy books where I feel like I get an insider's glimpse of something and I learn something, so my hope for readers would be that, even if it's not fantastic literature, it does show you a world that I know in great detail.

My hope would be that people enjoy that and learn something about the medical profession. I would hope that they don't take away that we're all just a bunch of salacious fools. [laughs]