Charlotte Is Not Street-Skating Friendly, but in the End, Skaters Gonna Skate

It was an insane skateboard jump no one had ever made. William Daughtry II landed "Death Gap," and he did it with epic flair.

The first time the 20-year-old tried making the gap, it was 1:30 a.m. He snapped the tail off his board in one attempt, snapped the nose on another. He borrowed his friend's board and snapped it in half.

Daughtry and his crew returned to the Uptown spot near the Mecklenburg County Courthouse, and Daughtry successfully made the jump, skating off an 8-foot-tall wall, doing a 180-turn while sailing over an 8-foot gap — as well as over an approaching security guard — and landing on a 3-foot-tall wall.

"I ended up trying it 40 times," Daughtry says. "By the time I was done, I couldn't walk. My friend had to carry me off the spot.

"It was special to me because in every aspect of my life, I like doing things people won't do. I don't like following people. Most of the gaps I've hit in Charlotte, nine out of 10, nobody else has hit."

Street skating, where skaters perform tricks up, on and over manmade hardscapes, is hugely popular (it's in the 2020 Olympics), and Charlotte has a vibrant and growing street-skating scene.

The Queen City, however, is not street-skating friendly — by any stretch. Authorities post no-skating signs, hire private security and install a wide-variety of metal bars and knobs on just about every exterior surface — all in an effort to thwart street skaters.

"You just get in and get out," 20-year-old skater Steven Lopez says of hitting a spot. "You do your trick and you go. If security comes, you ask if you can get a couple more tries. If they say no, you wait for another day.

"If you don't, they're coming after you. I've had my friends chased and tackled."

It's a battle that plays out every day: no-skateboarding proponents versus the skateboarding-is-not-a-crime set.

"OK, some kids don't seem to have the best attitudes," says Patrick Carroll, co-owner of Armada Skate Shop in Plaza Midwood. "One of them just cut you off in traffic on a skateboard, gave you the finger and all that stuff. They're raggedy and this and that. Skateboarders are cantankerous, loud and obnoxious.

"But if you put that aside, strip it down and look at someone who knows what they are doing, it's very remarkable. But it's hard to translate that for everybody else who may just see this kid making noise going down the sidewalk or who scuffed up his property because he jumped up on a rail and slid down it."

"Coming from an African-American household, everybody played basketball, baseball, and football," Daughtry says. "I wasn't good at any of them. I stepped on a skateboard, I remember I was decked out in my SpongeBob pads, and I jumped off a curb the first day and knew skateboarding was where it was at."

For 15-year-old Georgia Martin, a top local skater and freshman at Myers Park High School, skateboarding resonated with her on several levels.

"I got into it when I was 10," Martin says. "I've just always been different, I kind of stood out. My friends at the time were kind of like that. We saw skateboarding and we were like, 'Oh my God, dude. We've got to get into this.'

"Whenever I am stressed out or have something on my mind, I just go out and skate."

Watch skating, or better yet give it a try, and you quickly discover the athletic ability required to do anything other than fall. But street skaters consider it to be more artistic expression than sport.

"It's hard to get others to see the artistic aesthetic of skating," Carroll says. "It's performance art."

For this and many other reasons, street skaters will risk being accosted or arrested to skate a spot. They just can't get the same satisfaction skating venues like Charlotte's Grayson SkatePark on the east side.

"You can do whatever you want; there are no rules," 24-year-old Dyshon Whidbee says of street skating. "You can just see a set of stairs and skate down it and try any trick you want instead of there being a lot of rules and regulations to it.

"Anything that you can put your own spark on it, I think is an art form. 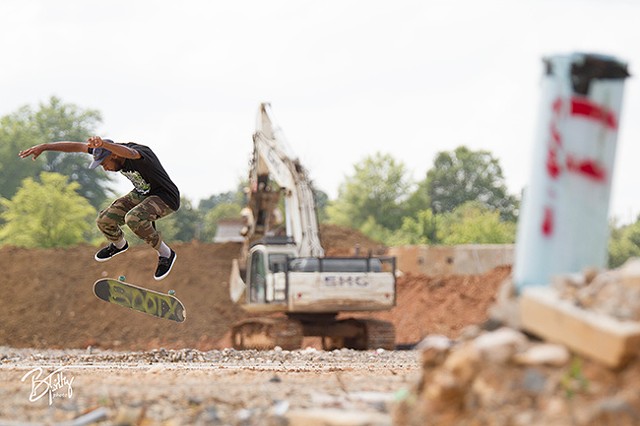 "The parks are smooth and perfected, which makes skating easier. I like the difficulty of street skating because you have to figure out how to get past a crack or something that is just in the way. Skateparks can get boring after a while. With street skating, you can travel anywhere and just do it. It's unlimited."

To avoid the hassle associated with skating buildings, sidewalks or schools, a popular alternative for street skaters is the do-it-yourself skate spot. Skaters will find the foundation of an abandoned building, claim it without permission and build cement ramps, ledges and curbs.

The installations mimic what skaters may encounter while riding on the street as well as at skateparks, and they are less likely to get kicked out.

"They are tired of waiting around for people to tell them that they can't do it when they have been doing it for years," Jake Phelps, the longtime editor of Thrasher magazine, says of DIY spots. "We've been building stuff, we know how to make concrete, we're going under the bridges, we're making shit happen. That's what we do. We're skateboard people. We see it, we want it, we do it.

"A lot of times, these kids, they get a skatepark passed, and by the time they get the skatepark built, they're already done with college and moved on with their lives.

There are DIY skate spots like Burnside in Portland, Oregon, that have become so well-established that cities grant skaters permission to continue using the property. But the biggest risk for most DIY spots is that, despite all the work that goes into creating and maintaining them, they can get demolished in an instant.

There was a DIY spot on Independence Boulevard on the foundation of an old Camelot Records store.

Another crew built a popular little DIY spot under a bridge in NoDa.

For years, Charlotte skaters convened at a DIY spot on Albemarle Road in east Charlotte. The spot was built atop the foundation of a demolished Uptons department store. Over time, nearly a dozen installations were built on the spot, and skaters loved it. 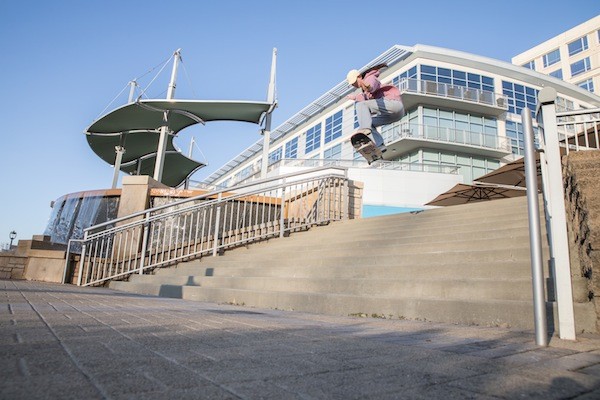 "When 'Albi' was torn down, it took a lot of wind out of a lot of these kids' sails," Carroll says. "It does suck when that happens; it's very disheartening."

Not long after the Albemarle spot was demolished, a small crew of older skaters took action.

"Someone called me and told me that happened," says Stephen, a 37-year-old skater who requested his last name not be used. "I went straight up there and salvaged any metal, steel and coping I could reuse."

Stephen stashed the metal — which is used for the tops of ramps, ledges, and walls — under some shrubs in a corner of the 80-acre parcel that had been home to the Eastland Mall — which opened in 1975, closed in 2010, was purchased by the city in 2012, and demolished.

Later, when Stephen and his friends started thinking of places to build a new DIY spot, they settled on a foundation of what had been a Hollywood Video store adjacent to the Eastland site on Central Avenue.

The roughly 8,000-square-foot cement foundation was perfect for a DIY spot. "We brought a bunch of blocks over there just to see how it would go," Stephen says. "No one touched them for like a week. We went ahead and built the thing — me and a couple friends. We went to town on it, taking it slow.

"Every month or two, we would build something new," Stephen adds. "That was two years ago."

Stephen and his friends have since poured an estimated $5,000 and countless man hours into transforming the location from nothing to the hottest street-skating spot in Charlotte.

On any given weeknight or weekend, up to a dozen or more skaters of all ages can be seen shredding the Eastland foundation spot and its dozen installations. 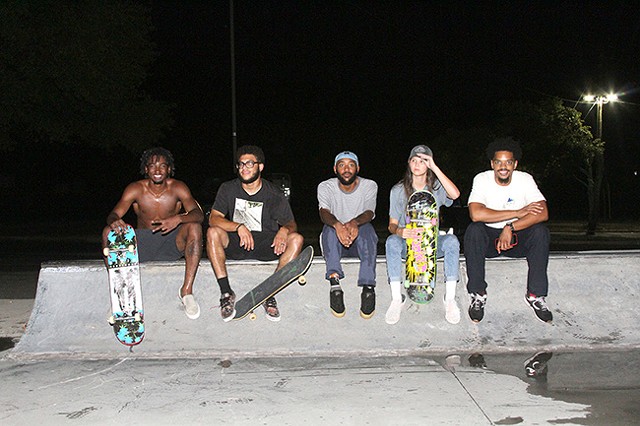 "A lot of it is very low impact, chill," Stephen says of his creation. "I'm old and some of my friends who skate are in their 40s. We were like, 'Let's just build something we would like to skate.'

"I designed it so it would have a flow to it," he says. "You can whip around this thing in circles all day — have obstacles to hit, keep your speed up, and keep moving. It worked out good; I'm pretty stoked on it."

Unlike the foundation spot on Albemarle Road, which proved impossible to keep clean and graffiti free, the Eastland crew works to keep this spot as clean as they can.

With all the time and money that has gone into Eastland, skaters are hoping the city, which has struggled to find a use for the parcel, will sanction the tiny spot and allow it to remain.

"This provides a place where skaters can come, hang out, do what we're doing, not be bothered, and we're not bothering anybody."

If the Eastland DIY spot is demolished, don't think for a second Charlotte skaters won't go hunting for another foundation to build and skate.

"If Eastland is torn down today, I guarantee you we'll have something built up within three months," Carroll says. "Your passion for skating isn't going to die because a spot isn't there any longer.

"It's a need. When you step on that skateboard and you start to progress, you are received by the family, and it's your source of joy, almost nothing will stop you from skating."