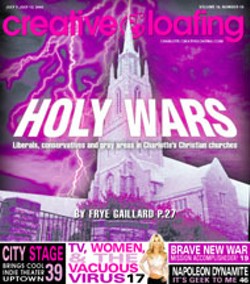 Bill James was happy when he saw the press release. He thought of it simply as a shot across the bow. It was February 2004, a time when the word was beginning to spread that the Charlotte city council would consider a spousal benefits plan for unmarried couples, gay or straight. Dan Burrell, the senior minister at Northside Baptist Church, a man who has emerged in recent years as one of the city's leading fundamentalists, issued a release denouncing the plan and calling on his fellow conservatives to join him.

By his own account, Burrell is not a throwback, not a 21st century embodiment of the stereotype of Southern fundamentalists. Beneath the warm wooden dome of Northside Baptist, he preaches a sunnier gospel on Sundays than his famous predecessor Jack Hudson did. He rejects, for example, the old hang-ups on the issue of race that once tainted the message from many Southern pulpits. He proclaims instead that "the Scriptures scream racial unity," and says it's dangerous when the Christian faith is used to justify a moral wrong.

But if Burrell sees his ministry as part of a rich and noble tradition going back to the abolitionists of the 19th century, he also believes that the stakes in the moral battle are high. Whether the issue is race, right to life or the sanctity of marriage between a man and a woman, Burrell says the time has come to take a stand -- to defend with no hesitation or shame the "eternal and absolute authority" of the Bible.

In recent months, Burrell has begun meeting regularly with other conservative ministers in the city, trying to put together a coalition that will speak out strongly on a whole host of issues. He has an ally in County Commissioner Bill James, arguably the most conservative politician in the city, and a man whose career on the public stage has been driven by his strong fundamentalist faith. James believes the fundamentalists are winning. He believes, in fact, that at this moment in the moral history of the city, there are no voices of consequence to oppose them.

James understands that for the last half century, churches have played a major role in the politics of Charlotte, at least in the broadest sense of that term. Led and prodded by several generations of outspoken ministers, they have tried to put a stamp on the public debate. Some of those ministers have been regarded as liberal, others conservative; some have been black, others white, but they have battled over time with a kind of genteel ferocity in an effort to assume the moral high ground.

Today, says James, he is satisfied to the point of feeling smug about the current state of that struggle.

Even James concedes that if that is true, it represents a seismic shift in the city. There once was a time when liberal voices thundered from some of the most prominent pulpits in town. Beginning at Myers Park Baptist back in the 1950s and 60s, a pipe-smoking intellectual named Carlyle Marney spoke out strongly on the issue of civil rights. Those were the days when the city of Charlotte was searching for its conscience, when blacks were sitting in at local restaurants or demanding the total integration of the schools.

The eloquent liberals like Marney and Warner Hall of Covenant Presbyterian sought to give aide and comfort to the cause, calling on the prominent members of their flocks to be better Christians. At its heart, their argument was simple enough: All men and women are children of God, and therefore brothers and sisters of one another. But these were men of powerful intellect, who could preach and teach and inspire admiration, even among people who didn't quite agree.

Their opposite number back in those days was the fiery Jack Hudson of Northside Baptist. He was a plain-spoken man with slicked down hair and a hunch to his shoulders, and he had a substantial following of his own. He built one of the first of Charlotte's mega churches, but in the battle for the conscience of the people of the city, Hudson was simply no match for the liberals. He inveighed against assorted sins of the flesh and the dangers he saw in racial integration, and slowly, but surely respectable opinion began to tune him out.

And so it was that the day of the liberals lasted well into the 1970s, and perhaps even longer, as a second generation began to emerge. These were men like Carlyle Marney's successor Gene Owens, and Doug Oldenburg, who followed Warner Hall to Covenant Presbyterian. There was Charlie Milford at Park Road Baptist, and Randy Taylor at Myers Park Presbyterian, and Father Jim Devereaux at St. Peter's Catholic.