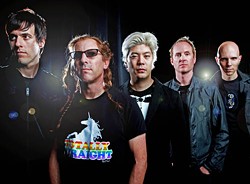 SCARLET CARSON Glossed as the "next big rock band out of Dirty Jersey," this five-member group joins a genre of rock known for its tight jeans and revved-up solos. Fans of Avenged Sevenfold will find some parallels in Scarlet Carson's hooks. You have to be in a very particular mood for this kind of music: overtly masculine and noisy, but a mood making for a "snooze-free" live show. $7. The Milestone. www.themilestoneclub.com. (Tommy Werner)

TAKING BACK SUNDAY It seems safe to call these guys pop-punk pioneers. They established their hand in combining hardcore and pop-punk into widely accepted hit records over a decade ago and don't seem to be stopping anytime soon now that the original lineup was back for their last album. With domestic and international dates scheduled in support of their latest album, expect the best from them. Thursday, Colour Revolt and The New Regime open. $34.50. The Fillmore Charlotte. www.fillmorecharlottenc.com. (Mike McCray)

DO IT TO JULIA This Asheville-by-way-of-Boone quartet retired to Martha's Vineyard last winter to record their Kickstarter-funded sophomore record, an appropriate setting and time for the band's brand of sepia-colored folk pop. Co-songwriters Ryan O'Keefe and Halli Anderson build song-lattices for Anderson's multi-tracked violin to flit through, and male-female harmonies provide melodic buoyancy. There's an aimless drift to the songs, though, suggesting they could do with some tightening (and a hook or two), and the narratives tilt self-absorbed, undercutting any Appalachia authenticity in the music with a disheartening granola vibe. With Little Tybee and Jeremy Aggers. $6-$7. The Milestone. www.themilestoneclub.com. (John Schacht)

KRS-ONE The legendary founder of Boogie Down Productions has been on a crusade to spread the teachings of hip hop and unlike some of his peers from a bygone era in hip hop, KRS never let his skills as an MC diminish from resting on his laurels. Sure, his stance as a hip hop purist butts heads with younger MCs but seeing him live is the only way to understand exactly where he's coming from. Junior Reed is also on the bull. $22.50. Amos' Southend. www.amossouthend.com. (McCray)

AN EVENING WITH BENJI HUGHES The Hirsute One returns from another West Coast sojourn for a night of debauched hometown balladry. It's been three-plus years since A Love Extreme made its big double-disc splash (well, "big" regionally speaking; New West dropped Hughes shortly afterward), and it's been quiet on the new-material front. Live, Hughes can be transcendent or train-wreck — despite the best efforts of a crack band of locals, you never know whether "The Mummy" will show up and unravel Hughes' shows. But you can always count on the songwriting to be among the very best going, period end-stop. $10-$12. Snug Harbor. www.snugrock.com. (Schacht)

GROWN UP AVENGER STUFF The Second Annual Four Hour Girl Power Rock Mini-Fest will be held outdoors next to Salvador Deli on this night and features the young and talented Chasing Pedestrians, the newly formed Shot Silk, Charleston band The Shaniqua Brown and the female-fronted rock quartet Grown Up Avenger Stuff. GUAS has developed a bigger stage presence in recent months and continues to drive forth with unbridled rock grooves and raw vocals. Free. 8:30 p.m. Salvador Deli. (Jeff Hahne)

?UESTLOVE One of hip-hop's most notable and recognizable faces, the drummer/leader of the legendary Roots crew has settled nicely into a nightly gig as the backing band for Late Night with Jimmy Fallon but the band still takes time to tour and pursue individual endeavors, which for ?uestlove means DJing all over the place. Watch him spin his favorites and crowd favorites all in living color. $15. Re:Public. www.thesolkitchen.com. (McCray)

THE SITUATIONALS The Charlotte quintet has built a following based on an awesome live show and equally engaging material. More than an outfit straining to recreate the 80s music that influenced them, they've independently put on for Charlotte with a sound all their own. John Shipe, Lucky Five, Porcelain Mary, Jah Fisherman, Jared Allen & Company are alos on the bill. The show is part of the American Pit Bull Foundation's first benefit concert. $25-$75. Amos' Southend. www.amossouthend.com. (McCray)

ELVIS COSTELLO All sneering, snotty snark and pent-up Freudian sex-angst when he burst on the late-'70s scene with his Buddy Holly glasses, pigeon-toed aggro-stance and pencil-leg jeans, Elvis Costello shared punk's fury but actually knew his way around a ballad and even what a bridge was. Back then he may have reveled in enemy-making (Google the unfortunate Ray Charles incident), but Costello has mellowed comfortably into his elder statesman role by remaining creatively restless. Of course not every Brodsky Quartet collab or Il Sogno is gonna be your cuppa, but at least he's not tourin' on the oldies... well, except for this tour, which features a 40-song roulette wheel of (mostly) early hits and a stage show custom-built for his Vegas years. $34.50. Belk Theater. www.blumenthalarts.org. (Schacht)

GOD SAVE THE QUEEN (CITY) NoDa has long had a tight hold on the city's best venues, but the new Chop Shop is a hall away from the crowd of the classic main street. This is the first major event at the location, and plenty of local bands are coming out to inaugurate it. Stephen Warwick, Small Talk Industries, Sea of Cortez and Jon Lindsay are just a few of the acts setting the stage for the next place to see live music. $5. 4 p.m. to 1:30 a.m. www.chopshopnoda.com. (Werner)

A PERFECT CIRCLE Guess what? We're getting the band back together! Well, the guys in A Perfect Circle probably thought Maynard was too busy focusing on Tool and/or Puscifer to get back around to anything new with APC, but sometimes dreams do come true. The band has even broken out a new tune or two on tour. Driven by the vocals of singer Maynard James Keenan and the songwriting of guitarist Billy Howerdel, APC continues to impress their old fans and win over new ones. $47.35-$73.90. Time Warner Cable Uptown Amphitheatre. www.livenation.com. (Jeff Hahne)