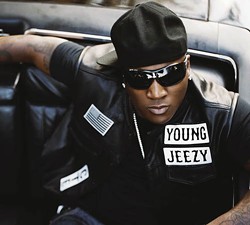 BRIAN MCKNIGHT This show has been postponed until Oct. 7. $47-$77. Ovens Auditorium. www.ovensauditorium.com.

DEX ROMWEBER DUO Romweber morphs into a guitar-swingin' madman the moment his six strings are plugged into the amps. The rickety guitar and his signature growl spew forth a maniacal blend of rockabilly, country and blues that's so delightfully old timey that trends be damned. The duo, with his sister Sara on the drums, is in a renaissance of sorts, channeling Dex's ole combo the Flat Duo Jets while awakening newbies to the possibilities of raw spirituality. The duo is releasing another fab new record, Is That You In Blue?, this week. With the Lesser Pauls and Erika Blatnik. $8. Snug Harbor. www.snugrock.com. (Samir Shukla)

OCEAN IS THEORY This up-and-coming Atlanta outfit is not shy waving their '80s alterna-rock flags. Delay guitar pedals evoke Slowdive and U2, while the band slowly builds the momentum of the songs. The guitars are intriguing, though the band is still in a yet-to-fully-gel mode. They're working the EP Into the Mouths of Lions while awaiting release of a full-length recording later this summer. Also on the bill are Parachute Musical, Wylie and The Local Traumatic. $7-$10. Tremont Music Hall. www.tremontmusichall.com. (Shukla)

BLACK LIPS The self-proclaimed "flower punk" quartet has a reputation that hits venues weeks before they do. Tales of misbehavior have led to quite the rebel personality, but the music is tame in comparison. Influences from '60s rock get fused with a bit of punk and DIY ethic on the band's latest, Arabia Mountain. With Night Beats. $12-$25. 8 p.m. Neighborhood Theatre. www.neighborhoodtheatre.com. (Jeff Hahne)

SEVENDUST Last year's release Cold Day Memory features the original line-up where Sevendust tackles its alt-metal, laden with melodicism as needed, sing/scream as required and hints of hip-hop intermingled, into a full-body blow. Coming up on 15 years since their debut, the blokes are well-versed at their stuff, the chiseled stop-and-go guitars included, and if you dig the genre, this is about as good as it gets. With Adelitas Way, Seven Day Sonnet and Eye Empire. $17-$20. Amos' Southend. www.amossouthend.com. (Shukla)

SOUTHERN CULTURE ON THE SKIDS Formed in the early '80s, the N.C. trio hasn't changed much over the years — and that's a good thing. As singer Rick Miller puts it, the band plays "toe-suckin' geek rock" combining elements of rock — in surf and rockabilly styles — with plenty of energy ... and food references. Touring in support of its new EP, Santo Swings. With Malamondos. $15-$18. 9 p.m. Visulite Theatre. www.visulite.com. (Hahne)

BRAIN FLANNEL/WHATEVER BRAINS It's fitting these acts chose grey matter-related monikers since the former (CLT-based) and latter (Raleigh) excel at stimulating both motor control and pleasure centers in the ol' cerebellum. Brain F plays a self-described "female-fronted overdriven nuclear garage-punk fusion," wielding distortion like a cudgel and tempos like mainlined speedballs. Think early X or TSOL and you're in the aggro 'hood. As for the prolific but camera-averse quintet from up the I-85/40 corridor, the WBs blend post-punk into the lo-fi mix, like the Fall channeled through the two-minute cyclones of the late Jay Reatard's guitar-and-amp rig. Part of Recess Fest Benefit with Pullman Strike, Divide Divide Divide, Monarchist and U.S. Wildlife. $6-$7. The Milestone. www.themilestoneclub.com. (John Schacht)

MIKE STRAUSS BAND David Childers, a man who knows a little something about songwriting, dubbed Mike Strauss one of the city's finest songwriters, and who are we to argue? (Besides — have you seen the guns on Childers?) Strauss has been turning out solid roots-flavored rock for the better part of a decade, including last year's short-but-sweet Ideal Road. He calls some of the best musicians in town bandmates, too, and on this night they'll be joined by special guest John Morris on keys. For those of you with way-back machines, that means three-quarters of Come On Thunderchild — Morris, drummer David Kim and guitarist Randolph Lewis — on stage, and rumor has it they may even be breaking out an old CoT nugget or two. Opening for Truckstop Preachers and with the Aqualads. $10. Double Door Inn. www.doubledoorinn.com. (Schacht)

BABYSHAKER The Charlotte rock outfit will go on a brief hiatus after this show due to a "maternity leave" for one of the band members — he's becoming a dad. So, get on out and soak up every bit you can ... Singer Scott Weaver is sure to unleash his inner rock god, not knowing when he'll get the next chance to. And the best part, it's free! Shuffle Party also featuring Cement Stars, Modern Primitives and Miami Dice. Tremont Music Hall. www.tremontmusichall.com. (Hahne)

YOUNG JEEZY Along with DJ Drama, he turned the mixtape game on its head with 2005's Trap Or Die. Since then, he hasn't disappointed, and the streets have been clamoring for his fourth studio, TM103, for more than a year now. While that project inches closer to Dr. Dre's Detox lure, he's still touring on countless mixtape and album hits. A favorite guest feature of Jay-Z and Kanye West, no one tears through a set like him. Even casual fans will note his shows flow hit after hit, with the thug motivator sprinkling his trademark charisma and clever wordplay over every track. Freddie Gibbs, Charlotte's Deniro Farrar and J. Capri $28. The Fillmore Charlotte. www.fillmorecharlottenc.com. (McCray)