The goal is to curb police brutality, but they're bogarting the footage 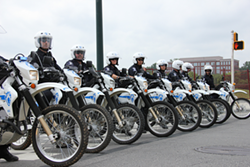 Charlotte's police department says it's taking steps to prevent excessive police brutality after several high-profile incidents led to the deaths of unarmed citizens. But not only does the technology it's requesting come with mixed reviews — it's essentially trying to fight firepower with more firepower.

In April, City Council allowed the department to use more than $350,000 from the asset-forfeiture account, money acquired by seizing assets from drug dealers, to buy new rifles and body cameras. The body cameras are about the size of a lipstick tube and can record up to 12 hours at a time. At the end of a shift, an officer plugs it in to a computer to upload the footage.

A month later the Charlotte-Mecklenburg Police Foundation, a nonprofit formed by local business and civic leaders to help CMPD invest in new equipment and programs, matched the $250,000 already allocated for funding body cameras to go toward the new technology. The $500,000 will be enough to equip about one-third of the force with body cameras.

Rialto, California, has become a golden example of how body cameras can curb police violence. In February 2012, all 70 of the town's police officers began wearing cameras. The next year, use of force by officers fell by 60 percent and in turn, complaints against officers declined by 88 percent. City leaders credit the decline to awareness; when people on both sides of the badge recognize that they are being filmed, they tend to behave.

In Albuquerque, things haven't gone so smoothly. The city was also one of the first in the U.S. to equip officers with body cameras, in 2012, but has yet to alter its reputation as a trigger-happy force. A recent incident in the city's foothills involving a mentally ill homeless man garnered national attention.

On March 16, James Boyd was killed in a confrontation with officers. In body camera footage released by the Albuquerque Police Department, Boyd looks as if he is turned away from officers when he is shot. Knives were later found on his body, but Boyd, who appeared to be camping, was yards away from officers when he was killed. Federal investigators are looking into the case and will likely review the same body-camera footage that hundreds of thousands have already watched on YouTube after it was released by the police department.

Activists applauded such transparency. But when and if footage of an incident is released to the public is up to each police department.

Kyle Knight, who leads a team for the American Civil Liberties Union's Charlotte chapter that is pushing for reform of the CMPD's Citizens Review Board, believes the cameras are a good investment overall — but he worries that the department will never release footage of an incident like Boyd's shooting. He is pushing for footage to be open to the media when requested through the Freedom of Information Act or by other means.

"Unless the footage from cameras is open to the public, the police are only going to use it in cases that show the police doing right and not use it when there is an issue with an officer," Knight says.

CMPD's record has been marred with high-profile shootings of unarmed civilians — the footage of which the department tends to withhold from the public. In September, for example, the department charged one of its officers with voluntary manslaughter after he shot and killed Jonathan Ferrell, an unarmed man who had just crashed his car in northeast Charlotte. The dashboard camera is expected to play a key role in that case, but the recording has not been released to the public.

Still, for some, the cameras themselves are a step in a positive direction. Activist Dwayne Collins, former president of the Charlotte chapter of the NAACP, has fought against police brutality. He says he applauds CMPD and City Council for what he calls their efforts to gain credibility through accountability.

"It can convict officers who may have acted illegally, or it can exonerate them if they have been falsely charged," Collins says. "It works all the way around to protect both citizens and police officers."

CMPD first used body cameras during the 2012 Democratic National Convention, for officers on motorcycles escorting diplomats and high-profile politicians around the city.

Those cameras were purchased with the $22 million the city received in federal funding leading up to the convention, a large chunk of which was used on surveillance equipment.

A year after the convention, 26 officers began wearing body cameras as a trial run for the department. Major Steve Willis heads up the project.

Willis says that footage from that trial run was used in training, in court cases and to discipline officers or correct them if they were deemed to be acting against protocol. These are all areas in which he says the cameras could come in handy. The footage could also be used by the Citizens Review Board, the group of people appointed by the mayor, city manager and city council to review complaints of excessive force.

Gregory West, chairman of the Citizens Review Board for the past three years, says concrete evidence always helps determine whether any claim (by police or a civilian) is true, but says he can't recall a case in which a body camera would have helped his team make a decision. Activists have called for reform of the Review Board after a Charlotte Observer report in 2013 found that the board sided with police on every review of misconduct in its 15 years of existence.

The national chapter of the ACLU, usually strictly against any type of surveillance, supports police using body cameras because of the accountability and standards that officers will be held to. But spokespeople for the organization say citizens should be made aware when they are being filmed, which isn't required by law.

Willis says that officers who participated in the trial run noticed that civilians often became more cooperative when they noticed that an officer was wearing a camera, but police do not advertise when and if they are being worn. "We want behavior to be what behavior is," Willis says.

CMPD will spend the next few months reviewing bids from contractors to supply the cameras and then return to City Council to request approval of a contract.

In the same April City Council meeting it requested the cameras, CMPD also requested more than $100,000 to purchase 45 rifles and ammunition for situations, such as mass shootings, violent street crimes and violent criminals attempting to evade police, in which they say their current shotguns and handguns are insufficient.

"If you look at the newer high schools, some of the hallways are longer than 100 yards," Major Jeff Estes says. "In an active shooter situation, we need to be able to return fire effectively."

The department noted an increase in assault weapons seized and being used in the area, but situations in which they would use the new weapons haven't increased. It's a prepare-for-the-worst approach to policing that departments around the country are taking after high-profile shootings, such as Sandy Hook, that some in the crime-prevention field say isn't addressing the real problem.

John Barnett, founder of civil rights group T.H.U.G. (True Healing Under God), does not support the funding of body cameras or more weapons for police. Barnett, who has led multiple rallies for the victims of force at the hands of CMPD officers, says he wishes more could be done to fund preventative measures. He mentioned Gang of One, a now-defunct CMPD gang-prevention program that he saw have positive results on participants.

"There needs to be more community involvement, not more violence," Barnett says. "The funding [for such programs] has just stopped, and it feels like they've given up hope."

Gang of One was a federally funded initiative that ran for a decade in Charlotte. When its grant ran out in December 2013, no one tried to save it, though some of the people involved have been folded into CMPD's Youth Engagement Services, which does not focus on gang prevention but on juvenile crime as a whole. Although it has adopted some Gang of One programs, such as gang-related tattoo removal, Youth Engagement programs, such as life skills classes for young people ordered to wear electronic monitoring units, focus on intervening with young people already in trouble. Gang of One focused on preventing youth from entering a life of crime in the first place.

"It's like I'm cleaning up the garage after the cookout, when I should have had it ready before anyone came over," Barnett says. "We need to be doing something to stop these incidents before the bullets ring out."