Dilworth's Copper Keeps Its Sparkling Rep Despite the Haters 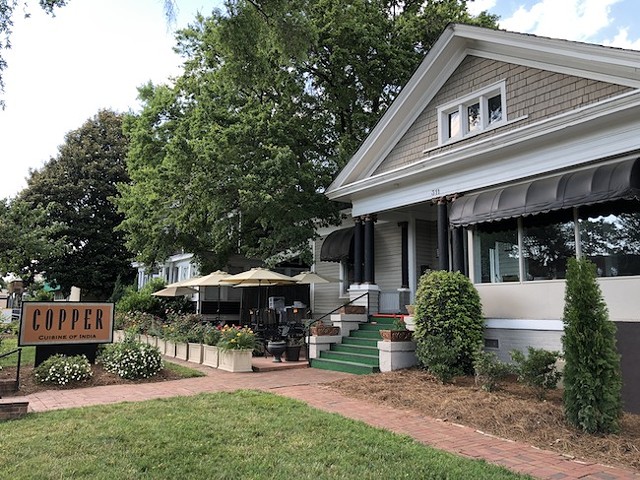 In the land of cheesy grits and fried chicken biscuits, it's the smell of murgh tikka masala — the traditional Indian dish of piping hot chicken swimming in a tomato cream sauce spiced with Indian herbs — that draws the crowds in Dilworth.

Copper, a name that reflects a blend of historic Indian cooking tradition and modern English, is regarded by many as the best Indian restaurant in Charlotte. The restaurant's ability to create modern, global Indian food has developed a dedicated customer base that continues to grow, even in a region still dedicated to the Southern food staples.

Since its founding 14 years ago, the crew at Copper has been serving more than just typical Indian cuisine out of its historic location in the Mayer House on East Boulevard in South End.

"We try to keep the original authenticity of the Indian food, all the ingredients and everything, but try to give it a little bit of modern touch," manager Jimmy Bankar says.

The restaurant prides itself on its ability to make Indian food that's more accessible to diners who may have never tried the cuisine before. The idea came from Copper's owner Aparappar Sing Pannu, who also owns The Blue Taj in Ballantyne. Pannu's first restaurant, in Roanoke, Virginia, featured more traditional Northern Indian food that represented his own roots. But when he decided to expand to the Q.C., Pannu wanted to a restaurant that could bring Indian cuisine to a new audience.

"What he tried to do in Charlotte is give Indian food a little bit of upliftment," Bankar says, "so that it will be kind of a good introduction for the non-Indian community, who is really scared of trying Indian food for the first time."

It's the attention to spices and the simplicity of the menu that helps ease nervous customers into trying something different. Bankar often interacts with diners who are won over by the cuisine, but one patron in particular sticks out in his memory.

He recalls the customer who was "very much pregnant" and had never tried Indian food before. She was unsure of whether the cuisine would upset her stomach. Bankar assured her that she would be perfectly fine to try the murgh (meaning chicken) tikka masala.

"So she tried it, and 'til she went in the hospital for her pregnancy she kept on coming over here," Bankar says. "And as soon as the baby was born, she was back over here with the baby."

The food doesn't just attract newbies. The menu at Copper is tailored to suit Charlotte's Indian population, especially those bored with the city's basic Indian options.

"For our Indian community, it will be something different," Bankar says, "because a lot of people, they get bored off of eating the typical Indian food all the time." 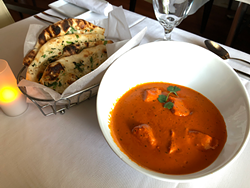 The menu is broken into three sections: traditional, vegan/vegetarian and modern. The murgh tikka masala is the restaurant's most popular dish and one Bankar is very proud of; it is most commonly recommended to first-time diners. Other common plates are the Kashmiri chili-fennel roasted lamb chops and the black sesame apricot chili-glazed chicken tikka with roasted pepper creme and market vegetables.

More classic Indian spots have a tendency to make their menus complex, including multiple options for sauces, causing hundreds of possible combinations and sometimes a headache. But the simplistic approach to Copper's menu doesn't leave the diner wanting for flavor.

"Each and every dish has separate ingredients to it, so every dish you will get different flavor," Bankar says.

It might be a seemingly small selection, but there's a point to it.

"We try to cover whole India on one page," Bankar says. "So when you come to Copper you can enjoy the delicacy of the whole India, basically."

Bringing the entire subcontinent of India to the table is fundamental to Copper's mission. While most Indian restaurants focus on the food of a particular region, Copper educates its diners on all elements of the cuisine.

To continue the diversification of diners' experiences, the chefs change up four to five dishes every so often, behind the direction of menu mastermind Mel Oza and chef Naveen Sadana. Bankar says patrons can expect new items to pop up again over the next four months or so. 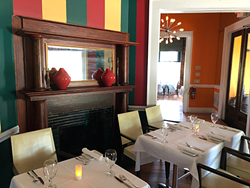 What's definitely not changing is the restaurant's location. Its location, in the historic Mayer House in South End — famous as the home where Carson McCullers wrote much of her iconic novel, The Heart Is a Lonely Hunter — allows for a unique atmosphere and dining experience. As Bankar points out, it's more charming than your generic dining room. With multiple rooms to sit and dine in, there's a palpable sense of character and history throughout the place.

On a weekend, you can expect Copper to be slammed with reservations. It's less predictable on a weeknight. "Sometimes 'til 6 o'clock nothing will be here, and 7 o'clock everything is jam packed," Bankar says.

With top-notch cuisine and a charming space leading to high demand, the team at Copper enjoys a certain popularity, but the crew never takes its success for granted.

"Being in Charlotte is actually a very competitive market, because we have a lot of Indian restaurants around us, and that's the reason we have to kind of take extra care," Bankar says. "Everything has to be kind of excellent to, you know, stay on top of this market."

Despite all the hard work, the restaurant has its share of haters, too.

"There are some critics," Bankar says. "A lot of people, especially in our Indian community, you know, they feel that Copper is all about Americanized version of Indian food — it's not that."

Bankar says the twists on classic dishes are about making inexperienced diners more comfortable with a new type of cuisine, and showing off what Indian food has to offer. The approach clearly has worked, as Copper has a 4.8 out of 5 rating on OpenTable and makes the cut on many Best of Charlotte lists. It's a repeat winner in CL's Best of Charlotte issue, taking the prize for "Best Indian" multiple times over the years.

"This is basically really a pride for us that we get to introduce our food to the community which is not Indian community," Bankar says. "So a lot of people have this misconception in their mind that Copper restaurant is only for American people — it's not. It's for everybody."