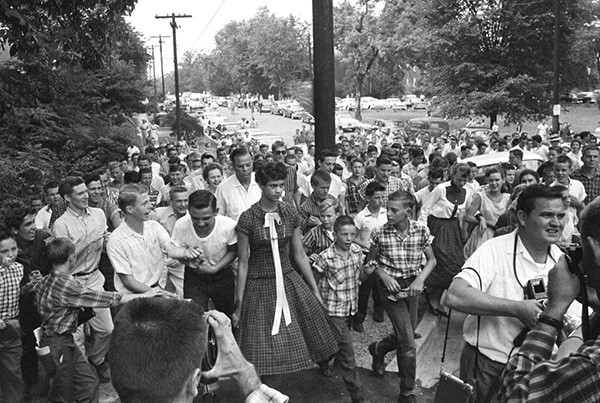 Dorothy Counts, 15, walks to school among a seething crowd of white students and parents on September 4, 1957. (Photo courtesy of Charlotte Observer)

Dorothy Counts-Scoggins sits in front of Mosaic Village on West Trade Street. The daughter of a professor, she lived just a block away on the campus of Johnson C. Smith University for 11 years as a child and later attended college there. She loves the university and stays active in its development, but it was at a school just a mile away from JCSU where Counts-Scoggins changed history, both in Charlotte and around the nation.

On September 4, 1957, Counts-Scoggins, then just Dorothy Counts, was one of four black students to integrate all-white schools in Charlotte.

News photos of the teenaged Dorothy walking to class at what was then Harding High School among a brutal crowd of white students and parents made their way around the world. The photos of the stoic student calmly walking through a vitriolic sea of hatred sparked outrage and inspired countless Americans to get involved in the civil rights movement. In the unfinished manuscripts that comprise the 2016 documentary I Am Not Your Negro, writer and activist James Baldwin remembers seeing the pictures and deciding to leave his home in France and return to America to help fight racism. 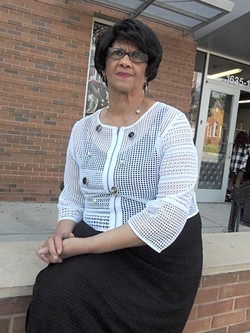 As the 60th anniversary of that day approaches, Creative Loafing sat with Counts-Scoggins just down the street from her alma mater and her current home in the Biddleville/Smallwood neighborhood to discuss why she left town a week after integrating Harding, and why she came back and has remained active in the community in the decades since.

Creative Loafing: Do you get sick of talking to journalists about that day in 1957?

Dorothy Counts-Scoggins: Certain times of the year, like now, it comes up more so than others. I don't have any problem with it. I do it a lot in the schools. You asked about journalists, but I make a habit of trying to do it a lot in the schools with the kids, because a lot of them have no knowledge. They don't know. And I need them to understand that even if a lot of things have changed now in education, a lot of things have happened as a result of people making sacrifices so they could have a better education. I just want them to know that.

What sticks with you from living through that day that people might not grasp by looking at the photos?

I think it's obvious to see, in terms of what was going on, it was an angry crowd. A lot of them were students, but the photo doesn't really depict that there were also adults as a part of that as well. Some of them might not have been directly in the crowd, but there were adults that were in the yards and on the porches of the houses that framed that street.

People say, "You don't look like you were afraid." And I say, "No, I didn't have fear. My goal was just to get through the door." But a lot of that came from the fact that I had such strong support where my family was concerned. Not only my family, but also the community as a whole. 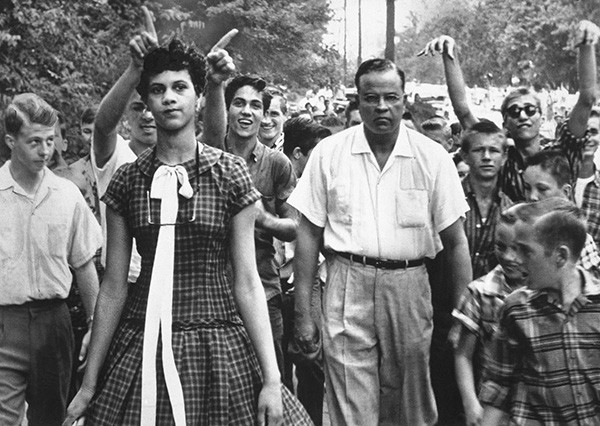 When did it become evident that you would not be able to stay at Harding? Whose decision was that?

It was a family decision. Naturally, my parents were approached, but I was a part of a family. The decisions that were made about their children, everybody was a part of it. So my parents didn't just come to me and say, "You're going to do this." I grew up in a family where we talked about acceptance, and even though I lived in a segregated world and understood what that was about, that didn't necessarily mean it was right. So as a result of that, this was an opportunity to be able to change things.

How much did your experience that day play into your decision to remain active in education and community issues?

What happened to me at Harding, Basically what it did was it guided my path in terms of my future. I made a choice then that the types of things that happened to me, I wanted to make sure didn't happen to other children. So it kind of worked out that way over the last 60 years, and I've sort of been in that realm. And as I've gotten older I've become more of a community advocate as well, especially since I have moved back into the northwest corridor. This is where I grew up. But yes, it changed my life.

I worked in child development for 40 years, and when I retired in 2012, I said, "Even though I'm retiring, it doesn't necessarily mean that I will stop fighting." And this was at the time when things were really heating up in Charlotte around Charlotte-Mecklenburg Schools. So I said, that's where I would take my focus. Then I moved back to this community; I moved from south Charlotte, my husband and I separated, and I said, "Well, I'm going home." So I moved back on the west side, so I could be close to my mother and my family and my church. That was in the '80s, early '90s, and I've been here ever since.

What does it mean to you when you hear that you inspired people like James Baldwin, in France, and the Swann family — who had been missionaries in India and would later be at the center of the historic Swann vs. CMS — to return to the United States and pick up the torch you lit with your decision to integrate Harding?

I guess I don't really think about it that way. I'm glad to hear that what happened sort of steered them in that direction to come back and do some of the work that they have done. But I tell people over and over again, I really don't think about it a lot in that respect. I'm the kind of person I just do what needs to be done, and my reason for doing it is because it's the right thing to do. It's a moral issue. 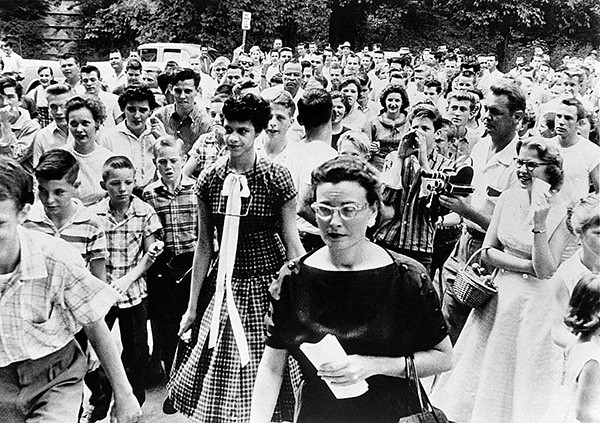 Is it disheartening for you to see the same arguments about school segregation now that were happening 60 years ago?

I was thinking about that this morning: It's almost 60 years ago when my family and other families in Charlotte made a decision to put their children in those schools to make it better for all children. And here it is 60 years later, and I'm not so sure that we weren't better off 60 years ago in the segregated schools that we had — even though we were lacking the resources and those kinds of things — than some of the kids are today, because they're going through so much other kinds of things. But it upsets me because I never thought that 60 years later that we would be back to where we're still fighting for that which we were trying to fight for then.

I guess what it is is that people just don't understand. Everyone has their own feelings in terms of what is right. But this whole thing around racism is a part of this, and it's not just the schools. And that is the part that bothers me, because I didn't grow up that way. And through my whole life I just never thought in this day and age that we would be facing the kinds of things we're facing today, the hatred and the bigotry.

What sort of issues do you feel strongly about now?

First of all, I have to take my hat off to Dr. Ronald Carter [soon-to-retire president of Johnson C. Smith University]. He has played a big role in terms of [progress against the gentrification that] has happened on this corridor. He was the president who came outside the gate, and as a person who lived in the corridor, but also lived on that campus, I know that he came outside of the gate, and he got things started. And he's retiring and will be leaving shortly, so we as residents who live on this corridor, we have to pick up and continue moving things forward. Because even though it's going through gentrification,There are a lot of people who live on this corridor who have been in these neighborhoods for 50 years or more, and they deserve to have the kinds of living experiences and other kinds of opportunities in this corridor just like anybody else in Charlotte.

I'm part of a group called the Council of Elders. Dr. Carter started that in 2009. And those are all leaders on the corridor, and we get together and we talk about change and things we want to see. My hope is that I can continue to be a part of that. I'm also part of another group called the Historic West End Neighborhood Association, and it's the neighborhoods on the corridor, and we do the same things. We talk about the kinds of things we want to see, bring people in to talk about things in terms of what's going on downtown and other places, and then we can take it back to our neighborhoods and share with our neighbors.

I don't plan to move from the corridor, and my hope is that I will see the transformation and be a part of that. And the other part, the school part of it, it's Bruns [Academy]. I want to see changes for Bruns. It is a neighborhood school. I want to see that, and the same thing with West Charlotte and the same thing with other schools that are on the corridor. I want it to get back to the way it was before.

Are you optimistic when you look to the future?

I am. One of the reasons why I'm hopeful is because of the fact that I think we are getting a very good group in Charlotte — and I'm hoping this is happening across the country — a group of millenials that are coming forward to say, "Hey, we don't want this." And so, they give me hope.

They're willing to speak up, and it's sort of reminds me of myself and some of the others from 40 or 50 years ago. So I think as a result of that, I think things are going to change. Not that the older stakeholders in this community can be forgotten. We still have some very good people, people I call diehards, in this community who believe in what we believe. But I think it's time for the younger generation to pick it up and move forward and create change, for their children as well as other children, the same kind of things that we were fighting for.