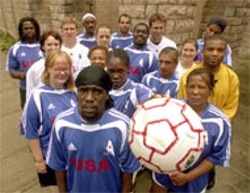 Ten months ago, Stephanie Johnson climbed aboard a Charlotte-bound Greyhound bus without a dollar in her pocket because, she says, God had urged her to leave Baltimore. Unfortunately, God hadn't urged anyone just yet to provide her with a job or a home. She ended up at the Salvation Army.

Fast forward to the present, and the 45-year-old Johnson has a passport and a plane ticket to Scotland, where she expects to play soccer in front of crowds of at least 40,000 people. For a woman who bicycles at 4am to a full-time hotel job but still finds Charlotte apartment rents out of reach, joining eight other homeless soccer players to represent the US in the third annual Homeless World Cup, to be held in Edinburgh July 20 through July 24, is a heady prospect.

Hard to believe, even. Some relatives called her "delirious" when she shared the news. But Johnson has one explanation for the good fortune: "You get very religious when you're on the street. You believe in God when you can't even believe the person next to you."

Not many soccer players who are headed to a world championship have recent memories of battling crack addiction and relying on a soup kitchen for meals. Nor do many scrounge for a place to sleep at night or shower in the morning. But this is reality for the Art Works Football Club, whose 1-19 record is not too stellar (their sole win was, in fact, a forfeited game).

With a record like that, you might expect the team to be discouraged about their chances. But no. "I'm looking forward to getting the Cup and bringing it home," said Margaret Lindsey, who took up soccer only three months ago and still is one of several players who seem to genuinely expect a victory over 31 other teams, including many that hail from countries in which soccer is a national obsession.

Coaches say that's part of the beauty of homeless soccer: As in their real lives, the players approach each game as a potential victory, even if there's little chance they'll win the actual numbers game. "That's what they have to do every day," said co-coach Lawrence Cann, who's also the art director at the Urban Ministry Center.

Cann developed the team a year ago with Jessica Woody, a volunteer and self-professed "Internet geek" who learned online about homeless soccer teams and thought the center's clients might benefit. Charlotte became the second city in the entire US to have a team (New York City has the only other club). Elsewhere, however, homeless soccer has been a phenomenon. The International Network of Streetpapers organized the free games as a way of drawing attention to homelessness and in the process providing homeless people with confidence-boosting recreation. In 2003, the first Homeless World Cup drew 20,000 to Graz, Austria. The following year's competition in Gothenburg, Sweden, attracted 40,000 spectators.

Less than two weeks before the competition, practice in a gym at Covenant Presbyterian Church in Dilworth was a mix of good-natured taunting and spirited cooperation — a far more laid back atmosphere than one might expect from a team headed to an international tournament. But then, this was a team formed to help homeless men and women kick old habits and feel better about themselves, not just to kick ass.

The team's biggest audience so far has been only about 30 people, but players say they aren't intimidated. "I'm not nervous when I'm on the field. I'm focused on what's going on in the field," said Abdul Wright, 33, from Hartsville, SC.

The pensive Wright, who began playing soccer while in the Jobs Corps (a federal vocational training program for young people), hopes the tournament will help him personally as well as draw attention to homelessness. About a year ago, Wright was fired from his $8.25-an-hour job at the Pepsi-Cola Bottling Company on South Boulevard. He'd been hoping for a promotion, but once his luck nose-dived, he lost his studio apartment and was out on the street. Maybe, he hopes, he'll find another job after the World Cup. "Even though I'm not working now, I'm holding soccer like I'm going to be holding a job," Wright said quietly. "It helps my self-esteem."

Talk to other players, and the coaches, and you'll hear a similar refrain. The coaches are sensitive to criticism that the players' time might be better spent searching for a job. A few months ago, a caller told Cann that homeless soccer was "the most disgusting, liberal thing I've heard in my life."

"He said, 'I'm going to call my church and we're not going to donate to the Urban Ministry Center anymore,'" Cann recalled. "I was kind of surprised."

Such comments miss the point, say Cann and others involved with the team. Some players have jobs that don't pay enough to afford housing. Others are no longer homeless (you only have to have been homeless within the past year to play). Each player must meet with center social workers to set three-, six- and 12-month goals. And they say the team does teach job skills: showing up on time, playing by the rules, cooperating with others.

For many of the players, it's their first chance in a long time to be a part of the normal society many homeless men and women feel excluded from. Karla Lowery, a Belmont Abbey College student who helps the team, still remembers the year-and-a-half in the mid-1990s she spent on the streets, sleeping in a parking garage on Fourth Street and spending much of her days focused on finding places to eat and bathe.

"In a world of insanity, two hours of sanity means a whole lot," she said.

Out on their regular playing field at Sports Warehouse on Granite Street, the homeless players compete against job-holding people who treat them with respect. That's important to the process of changing old habits, said Johnson. "Once you start (living on the street), your body adjusts to it. Your mind adjusts to it."