We Just Wanted To Learn Spanish

Unexpected learning during a Bolivian coup 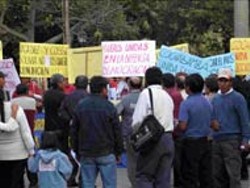 "So, do you have a place to hide?," asked one of my fellow students' emails a few weeks ago. My wife and I were in Cochabamba, Bolivia, studying Spanish at Escuela Ruwenwasi in Barrio Juan XIII, on the west side of town. We were staying with a local family and kept the TV on almost all day, every day. There's no cable, no CNN, but I was glad, as local coverage there surpassed almost anything CNN can do. Simon Bolivar said 200 years ago that South America is ungovernable. Like plowing the sea, he said. He must've been talking about Bolivia, as that nation has had around 200 governments since independence in 1825.

We hit Cochabamba during one of Bolivia's peak periods of ungovernability and I'm here to tell you it was tense even though Cochabamba, Bolivia's third largest city, was relatively calm. Its roughly one million people live in the center of the nation, in a high valley at an altitude of 8,300 feet. We experienced some initial altitude problems, but nothing that a little "te de coca" (coca leaf tea) couldn't cure. That's the overall prescription for problems here; or else just chomping down on coca leaves. During my third day of class, our teacher energetically procured a handful of leaves for us — during class — when we mentioned our altitude-induced sleeplessness. Did the job, too. In Bolivia, coca is more a sacrament than a drug. They have a popular saying: "Coca is a leaf, not cocaine." The plant is a source of pride and culture in a country where people are angry and pride is otherwise in short supply.

The climate is excellent in Cochabamba. High 70s during the day, clear skies and 40 at night, just the kind of weather that gets language students interested in checking the campesino-led roadblocks around town. We were warned not to get too close because of the chance of violence. But the roadblocks here were small affairs, just a few people putting several boulders across a key intersection or two, which no one dared cross. It didn't even qualify as real intimidation, as the city was exceptionally united on behalf of the dozens of blockades around the country.

Downtown, we witnessed a women's group demanding that possible presidential successors renounce the presidency and call for immediate elections. We also wandered beside City Hall where the mayor and his aides were beginning a hunger strike in support of the same demands.

Quechua- and Aymara-speaking indigenous people populate most of Bolivia. All are outraged by an attempted power grab by the rich elite from the eastern city of Santa Cruz; they also want the government to nationalize Bolivia's huge natural gas fields, located likewise in the Santa Cruz area. The indigenous population is feeling a surge of power after being repressed for the past 500 years and is now stirring for reform. Bolivia is South America's poorest country and the discussion of these issues is tempestuous while Santa Cruz's desire for autonomy has further enraged the rest of the country.

Bolivia's unrest was initiated when the Senator from Santa Cruz, Hormando Vaca Diez (who is also President of Congress), voiced support for his area's regional goals for autonomy. Soon afterward, a mass movement of peasants, miners, workers, students and other sectors (including the middle-class) arose to protect the country from Vaca Diez's divisive plan.

The skinny on Vaca Diez, who has been mired in corruption, is that he's the Tom DeLay of Bolivia, except worse as he was next in line to be President if he could manage to overthrow the 18-month rule of the moderate President Mesa. Mesa tried to compromise but despaired at the near-chaos of his situation, and resigned in frustration on June 6, hoping that new elections could be held. Vaca Diez was next in line and was seen as likely to use force against the protesters. But the opposition to Diez remained united, gained strength and pressured him to renounce the presidency. They also pressured the politician who was constitutionally next in line, Mario Cossio, to renounce his plan to take over as president. The one thing that unified the massive protests was a plan to have the third person in line, Eduardo Rodriguez Vetzel, head of the Supreme Court, temporarily accept the office of president and arrange a special presidential election as soon as possible.

Incredibly, that's exactly what happened, but every day the pressure was ratcheted tighter and tighter until the threat of civil war was on everyone's mind. All of us at the school were making contingency plans, registering with respective embassies, trying to figure out where we could go. Our school tried persuading incoming students not to come.

Thursday, June 9, was the worst day, as we heard that protesters would begin blocking power plants around the city if Vaca Diez refused to renounce the presidency — meaning the city, already short of gasoline supplies, would soon be without power. LaPaz, the capital, was already experiencing dire problems; food shortages, blood shortages in hospitals, as well as no public transport and no gasoline.

But now, Vaca Diez has renounced the presidency, peace has prevailed and civil war has been averted. Nothing has really been resolved, and Bolivia is still ungovernable, but until elections are held, perhaps in December, an uneasy truce will probably hold.