From DMZ to TMZ.com: 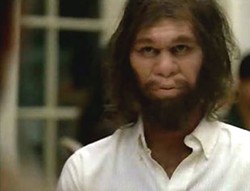 "Save the cheerleader, save the world."

I don't even watch Heroes, so I still don't actually know what that means, but I have a gripe with this strange tagline for 2006, because "our" president was a male cheerleader back in his prep school days at Andover, and well, let's just say that saving the world did not get checked off of his "to do" list this year. When I was a kid, and people used to talk about the Vietnam War, I always wondered how it was possible for regular life to go on back home while a war was being waged on the other side of the world. Well, now I know. Middle East excursions be damned, 'cause it's still on and poppin' up in this piece. Peace talks? Nah. Cross-cultural dialogue? Sorry. Britney's Caesarian scar. Mel Gibson and "The Tribe." Diddy's engaged (for now). You know -- the crucial shit. So ...

How exactly are we to consider the rash of high school football-themed shows and such that were the rage in 2006: they made Friday Night Lights into a TV series, MTV presented Two-A-Days, and Nike ran wild with its "Briscoe High School" ad campaign. The idea, presumably, with all these shows was to make the football kids seem like flawed, sympathetic guys who have to overcome "adversity" in order to bring their Podunk, U.S.A. varsity teams to glory. Yeah, I guess it's a really rough existence to go around every day with carte blanche on campus, an inordinate share of sexual attention and minimal accountability for your jock shenanigans. (Did that sound bitter?).

Speaking of ad campaigns, the results are in, and the GEICO caveman verily bludgeoned the rest of the competition for the best TV ad / YouTube clip of the year. Whoever picked "Remind Me" by Norwegian pop duo Röyksopp as the background music for the airport spot is a freaking genius and can run my campaign if I ever run for mayor of the greater Charlotte-Bragg Boulevard-Outer Banks-Triangle-Piedmont Triad Community.

Further proof that Aretha Franklin would never have made it in the music video era -- Danity Kane (memo to Diddy -- "press stop"). On a related note, in 2007 I'm calling for a moratorium on randomly tossing stacks of currency around in music videos. We get it -- after paying for studio time, flying your entourage out to the VMAs and kicking in for Babyface's alimony payments, you've got eight grand left over, and you want every dollar prominently displayed in the video. So "Stay Fly" when you "Make it Rain," but please come up with something different and new, like women dancing in bikinis. Speaking of which ...

Was that Fergie I saw with a completely undisguised swipe at Gwen Stefani? Gwen's had a good long 10-year run of appropriating other cultures -- from her hybrid punk/Chola look to her quartet of Asian-American backup dancers. But Fergie went ahead and cancelled all that with one of my favorite disses of the year -- wiggling around in the "Fergalicious" video like Gwen in "Luxurious." She also helped augur 2006's full-fledged domination of the over-30 hottie. A decade of lingerie tops and low-rider jeans has basically set the bar to where if women look sexy in their 20s, it's nothing. But make it to 30+ and you're still getting it done? Now you're talking about something. She had a little help from Eva Longoria, but none whatsoever from Faith "I want my CMA" Hill.

And finally, it's a good thing that T-Pain released "I'm in Love with a Stripper" back in February because if he had waited until spring, the Duke Lacrosse fiasco probably would have killed the whole vibe of the song. It's kind of hard to imagine flipping channels back and forth between the "Stripper" video and breaking news reports of Polo-clad LAX players being hauled off to Durham central booking. The takeaway here is that if you're a stripper of color, you're better off working somewhere that Paul Wall and Twista might be seen, rather than an off-the-books frat house full of "Northern Aggression." Likewise, if you're a well-to-do student-athlete looking for a good time, just remember what Jackie (Bruce A. Young) told Joel (Tom Cruise) in Risky Business when he gave him Lana's (Rebecca DeMornay) phone number -- "It's what you want. It's what every white boy off the lake wants." At the end of the day, though, I believe it was a positive that T-Pain, MJG and company articulated what was on the minds of so many consumers of the popular art of burlesque. Why not proclaim to the world that he's "in love with a stripper?" After all, there's a lot of you out there who are ... Happy New Year.