For three days each year, Heroes turns downtown Charlotte into a creative haven 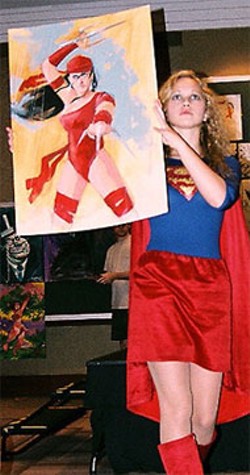 Where in hell is the Charlotte Convention Center? We're downtown on Friday, June 24, my ride driving directionless around the one-way streets, and me, looking for the tell-tale line of geeks that will point us to the Heroes Convention, the largest comic book shindig in the area.

I spot a girl, definitely a geek, and point her out to my ride.

The geek turns around and we can see that she's wearing the same shirt as mine. I admit it, I am a geek. I've read comics since I was nine. I keep them in plastic bags with white cardboard so their value won't go down. I'm headed for the convention with 40 or so of my comics and I am willing to wait in long lines to get them signed. This may not sound like much fun to you, but it gets better. Trust me.

We finally reach the place and the convention hall is huge: hundreds of booths, some peddling comics, others high-quality art by respected comic creators, a lot of artists. I hit Indie Island, a section devoted to independent artists who create their own books. I love talking to the indie guys and gals, because these people are into concept. When you work for a company like Marvel or DC, you take a lot of orders. Indie guys have one boss and it's them. At Indie Island, I know I'm gonna hear stories, good stories. Everyone's pitching their books, talking about how they're gonna make it. One guy tells me he's headed off to Barcelona to pitch a graphic novel; a gal tells me about her concept of sharks with feet.

You also hear about parties and big names. Here's where I listen in: There's a Charlotte-based artist who organizes a bar-hopping every year; there's also talk of Townsend, a pretty big name in comics, preparing for some wild nights. Comic creators like to talk about their books, but they also like their booze. Word around Indie Island is that the hotel bar is a hot spot tonight.

I take a mental note and then move on.

You meet some odd characters at comic conventions. I see a woman dressed as a Klingon soliciting donations for Hospice. It's a very charitable thing to do, but it's totally inconsistent with Klingon philosophy. Klingons are the type of people who, when someone is dying, the Klingons usually caused it. Perhaps the woman should have found a more sympathetic costume, something cuddly, like an Ewok or a Hobbit.

I go to get my books signed, but find that the signings have shut down for the day. Ready for a drink, I head to the Westin next door, sit down at the bar and plunk down $4 for a beer. One of the major bummers of conventions at hotels is the high price of booze. That's why you cozy up to someone who's already pretty thrashed and talk him into a drink. It's a law of survival and frugality, especially for a girl like me. Guys tend to buy me drinks just because I know something about comics, videogames and basketball. Here, only two of those subjects are covered, but as I mingle through the crowd of artists, writers and enthusiasts, I also get fragments of conversations on literature, film, the writing process, corporate strain, role-playing games, and which movie would be the hardest to turn into a porno.

On Saturday, I show up at noon with sunglasses on. The crowd is much larger and more people are in costume. I spot Lucifer and the Sandman as well as two of the Fantastic Four. I hop up to the card games and watch kids battle it out in versus tournaments for big money. These guys get wild over the cards, and when a game becomes tense, spicy words start flying and a crowd gathers around the players. Card tournaments are like chess tournaments with monsters — and a lot of caffeine. When the game comes down to just two players, each move elicits commentary from the crowd.

When I get back down to the convention hall, the Red Cross is giving out signed comics for blood. I want the signed Green Lantern, so I get in line and try to pretend I'm just being a hero. As an attendant sucks a pint from my arm, I look around and notice most of the givers are parents, and a lot with kids watching mom and dad do the right thing. I wonder where the single people are, and it brings me down a bit not to see more folks taking the time to give. Or maybe the mood swing comes from giving too quickly, because suddenly I turn yellow, pass out and wake to a friend laughing at me and handing me a Coke. When I'm set loose on the convention again, I have a nice rare, mint-condition comic signed by the artist.

Another feature of these shows is the out-of-work actors signing autographs for cash. There are two Buffy actors and the tall guy who played Metalmouth in the James Bond flicks. The guy pimping their autographs has found out I'm writing an article and hunts me down to meet the celebs. They're nice people, just trying to make a few bucks, but what can you say to an unemployed actor? Hey man, I liked your bit role, it rocked!

Later, as a group of comic artists head to Uptown Cabaret and the Indie boys go bar-hopping, I stick around with a few other artists who hit the hotel bar for some shots and conversation. It goes on into the night, which is why both myself and famed indie artist/creator Paul Pope are late for his signing the next morning.

Sunday is calmer, games are winding down, sales are low, so I hit the boxes of 50-cent comics and pay the vendors a quarter a book. I walk away with 20 or so comics and say goodbye to Heroes for another year. It all concludes on Monday, when a friend of mine looks through the program and points out something on the inside cover.

Sure enough, in the Heroes promotional photograph, I'm in the background, flipping through a comic book, completely at home.

Sam Boykin will return next week. If you have an idea for Urban Explorer, please contact him at sam.boykin@cln.com or 704-944-3623.