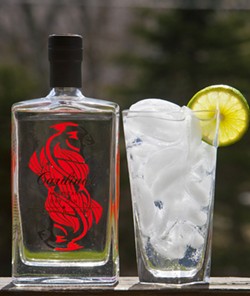 In the English-speaking world, the history of alcoholic spirits has been perpetually caught up in taxes and government control. This has been true in North Carolina, but here, societal and religious concerns have played a part as well.

In the past two decades, however, tobacco lands have yielded to viniferous grapes, and today North Carolina wine has an annual economic impact of $1.28 billion and supports nearly 7,600 jobs. The popularity of local microbreweries is also soaring.

Now, adventurous entrepreneurs are distilling alcohol. The Distilled Spirits Council of the U.S. (DISCUS) indicates that the number of craft distilleries in 2000 was only two dozen nationwide. Today, there are more than 270, and that number is growing.

Another distillery to open its doors in the state is closer to Charlotte. Southern Artisan Spirits in Kings Mountain (704-297-0191; www.southernartisanspirits.com) became the first legal gin distillery in North Carolina since Prohibition. Their label, Cardinal, was first released in October 2010.

Ironically, Kings Mountain was the first town in the U.S. to vote itself legally "dry" in October 1874. But today, the community has embraced this new business. Southern Artisan Spirits is the product of brothers Alex and Charlie Mauney, heirs to a once thriving textile business. In fact, Kings Mountain was once a flourishing textile community. But just as tobacco fields are now growing wine-producing grapes, the Mauneys have converted part of their family's former hosiery mill into a distillery.

Additionally, the fields that once grew the cotton for that area's textile mills will play a part in the distillery, too. The Mauneys are committed to sourcing locally whenever possible.

The Mauneys' interest in distillation arose from making bread. "We were baking bread as a hobby and got interested in yeast and fermentation," Alex Mauney explains. From that, the idea of a distillery was created. After two years of research, and complying with federal regulations, the distillery opened in 2010.

Gin was a logical choice since it's a popular base spirit for mixed drinks, such as the martini. Moreover, gin is a white spirit and does not require aging. Since federal licensing requires the apparatus to be functional before granting approval, the immediacy of gin seemed economically viable. Setting up a distillery, Mauney adds, "is a gamble and expensive, but we knew we could produce a high-quality gin."

Cardinal gin is handcrafted in small batches in the "modern western" style; in other words, they "backed off" the juniper and orange peel and went with a layered contemporary variation with a balanced herbaceous floral profile — a great gin for mixing. Their volume is about 12,000 cases a year, and they sell in North and South Carolina, Virginia and New Jersey.

Currently, a farmer is growing rye for the distillery and the Mauneys will try their hand at bottling rye by the end of the summer. They also plan to get into bourbon, using locally grown bright red Bloody Butcher corn, a descendent of a Native American corn, which will then be aged in white oak.