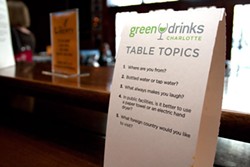 If you're looking to connect with eco-minded peeps in the Charlotte area, look no further than Green Drinks Charlotte. Event depending, 40 to 150 people might show up at the group's monthly networking events, and they're not the hippie tree huggers you might expect. The four-year-old chapter of Green Drinks is one of nearly 800 chapters worldwide. Its purpose: To gather people from every corner of the green movement — environmentalists, green entrepreneurs, people simply looking to live more sustainable lives — and get them talking.

"Sometimes it's good to take a break and talk to people who also care about serious issues, but on an informal basis," said Bill Gupton, an environmental stalwart in the Q.C. who also chairs the Central Piedmont Sierra Club and is NC WARN's latest hire.

GDC's five-member board of directors describes the group as loose and positive. There is no hidden agenda, and no one environmental issue or organization can dominate any meeting, although at each gathering a speaker is allowed to give his or her organization or business a shout-out. Currently, there are no membership dues or volunteer hours to log, either. That could change as the group grows, because the board members currently pay for all supplies out of their own pockets.

"We're out to connect the problem-solvers," said Bryan P. Gabriel, a sustainable technology and alternative energy consultant who is a member of GDC's board of directors. So far, the group is succeeding in that mission; it's not uncommon to meet someone at a GDC event who can help further one's own green goals.

"We're matching up people who may not have normally been matched up," said Amber Coffman, the board's official "Ambassador of Eco" and self-described "leader of the pack." She can tell you stories about entrepreneurs meeting corporate types at meetings only to find they have a lot more in common than they may have guessed. Even better, they often find they can help each other be successful in their green ventures.

Take the "Fry Guy." He needed used cooking oil and happened to meet someone at a GDC meet-up who had some to dispose of, creating a win-win situation that led to the reuse of a waste that's now avoided the dump and clogging of the community's sewage pipes.

The group also encourages "a holistic approach to sustainability in general," and members hope their bourgeoning community will help boost Charlotte's green-cred one meeting at a time through education and support of sustainable lifestyles, said Rachel Martin, the board's "Creative Green Queen." (She created GDC's logo.)

While the meetings are friendly, some debate is encouraged, as is a positive attitude, said Martin. "No unhappy ranting allowed," she said, adding that the board wants to foster a welcoming atmosphere that embraces newbies and regulars alike.

"We're so amazed that we have a ton of new people every month," says Coffman, citing a 40- to 50-percent increase in attendance each month. The group began tracking attendance at the beginning of this year, which began with its annual after-holiday "Re-New Year Party." (GDC is already working on the next one, to be held Jan. 12, 2012 at 5:30 p.m. at The Liberty in South End.)

The group boasts more than 425 members, with fresh faces showing up each month. If you go, expect a mixed crowd. In addition to environmental activists, you'll also run into architects, academics, interior designers, developers and people who are just beginning to think green.

Meetings are held the second Thursday of each month at The Liberty and usually feature a speaker who is given seven minutes to talk about his or her organization, business or product. After that, members eat, drink and socialize.

Table tents prompt networkers to chat about environmentally focused issues with questions like, "Bottled or tap water?" or "In public facilities, is it better to use a paper towel or an electric hand dryer?" The point isn't to have the right answer, but to discuss the topic, though not all of the questions are eco-nerdy. There are also topics like, "What always makes you laugh?"

In addition to the meetings, GDC holds events such as the "Sunset Segway Adventure Tour" at Latta Plantation on Sept. 20 and the "Wild and Scenic Film Festival" planned for later this year. The group also will host a reception at the Charlotte Chamber of Commerce's GreenWorks conference (charlottechamber.com/greenworks) on Oct. 6 at the U.S. National Whitewater Center.

Then there's the Green Drinks women's group, which meets quarterly. In November, the group plans to hang out at Vin Master, in Atherton Mill, for a "Find Your Flavor" wine tasting featuring organic, sulfate- and preservative-free wines from local producers. That event does carry a $25 charge, but it includes cheese. And space is limited, ladies, so you'll need to RSVP on the group's website, www.greendrinksclt.com.

Interested in attending a meeting? The next Green Drinks Charlotte event will feature a speaker from the Carolina Raptor Center, "who will have a live raptor," Martin wants you to know. That meeting takes place Oct. 13 from 5:30 p.m. until 8:30 p.m. at The Liberty.

Learn more at GreenDrinksCLT.com or via your social-media site of choice; the group's on Twitter (@GreenDrinksCLT), Facebook and LinkedIn.