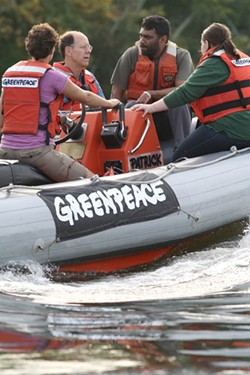 During his visit to Charlotte last week, Kumi Naidoo, the international executive director of Greenpeace, had some harsh words about energy executives, Democrats and the Democratic National Convention, which will be held here next September.

"The very fact that [Duke Energy CEO] Jim Rogers was appointed as the co-chair is a very big statement about how close the dirty energy industry is with even the Democratic Party," the 46-year-old native of South Africa told a packed room at the International House. If its merger with Progress Energy goes through, Duke will be the nation's largest energy company, and it already is one of the world's biggest contributors to environmental pollution. "There isn't even an attempt to hide being in bed with each other," Naidoo said.

For a world leader, Naidoo isn't as full of himself as you'd expect. During the first half-hour or so of his presentation, he sat and blended with the crowd while others stood, introduced themselves and explained why they're important and what they're concerned about.

When he finally took to the stage, Naidoo didn't launch into why he's important — although, as someone who gets invited to meetings by some of the world's most powerful CEOs and government leaders, he is. What he said was this: "It was such an absolute honor and privilege to hear each of your voices."

Even Duke Energy executives were wooed by Naidoo at an earlier meeting that the company's spokesperson, Erin Culbert, called "friendly, open and challenging." Culbert added, "We likely have differing views regarding the economics and operational limits of the energy system, but we also have common ground as it relates to longer-term goals for reducing our carbon footprint and increasing investment in renewables."

Before Naidoo got his current job, he was a social-justice advocate for various organizations and had to chase down those same CEOs, corporate executives and government leaders, to beg for a little time. Now, he admits with a laugh, they're the ones asking to have their photographs taken with him. They don't want their organizations "on our menu," so they invite Greenpeace to the table first, he told the audience at the International House.

During his visit last week, Naidoo focused on letting Charlotteans know how important local activism is. "One of the problems is that a lot of people are doing international work and are not doing local work," he said. That's why Naidoo opened his meeting in Charlotte — one of only four cities he visited on this trip to America — by listening, not talking.

He wanted to know what concerns Charlotte citizens. He'd already picked up on our worries about Duke Energy's four area coal-ash ponds, which drain into the city's main drinking water source. That's why Naidoo, a documentary film crew and I — a journalist who's written numerous articles on the topic — spent an afternoon before his speech on the Mountain Island Lake reservoir. Naidoo also wanted to get a feel for what the people of Charlotte are ready to stand up for and how Greenpeace can help. And he reminded the audience that it's not politicians or CEOs who count most when it comes to changing the world — it's small groups of determined citizens.

Tessie Ruff, a dental hygienist who lives in the neighborhood across from Duke Energy's Riverbend coal plant, got an opportunity to talk with Naidoo. She told him that her property is regularly covered in fine, black dust. "He definitely opened my eyes," she said of the Greenpeace leader. "He's not radical with his actions; he's so soft-spoken, so intelligent."

Naidoo told the gathering that citizens must hold leaders accountable, pointing specifically to President Obama's repeated mantra during his first presidential bid: "A planet in peril." It was a reference to the urgency of the issue of climate change. "I want to be quite blunt about it, as someone who was really thrilled about his election," Naidoo said. "We have not kept pressure on Obama to make sure that he delivered on many of his promises."

The Democratic Party's relationship with what Naidoo called the "dirty energy industry" is the sort of thing that makes the U.S. a joke on the world stage, he said. While the U.S. talks about wanting to be a green-energy hub, and while Rogers admits that climate change is happening and we should do something about it, the nation moves forward at a crawl, waiting for the next electoral cycle and for fossil fuels to give out, despite the job-creating and pollution-avoiding potential of green energy. In the mean time, Naidoo said, China brings a wind turbine online every hour and floods the market with cheap solar panels.

Naidoo said he believes America's leaders "don't have the courage or political will because the conservative forces in this country — and particularly those that have made, and continue to make, massive amounts of profits on oil, coal and gas — are wanting to cling to those profits right until the last drop of oil, or right until the last mountain has been exploded.

"The reality," Naidoo continued, "is that nobody is going to be able to make as much money out of the sun and the wind as they are making right now [with fossil fuels] — immoral levels of profits.

"There is going to come a moment, and that moment is coming fast, where it is going to be impossible for the U.S. not to act on climate change, and it's going to be because of one simple reason: competition."

That, and pressure from a united citizenry tired of dirty air and foul water.