Housing First once drew doubts, but it's hard to argue with results 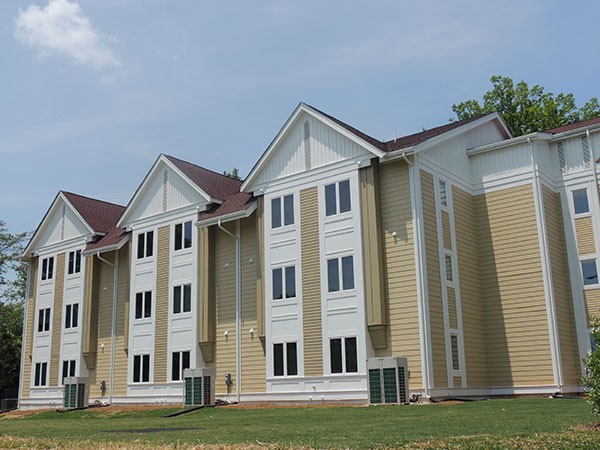 This new wing at Moore Place will house 35 chronically homeless people in addition to the 85 existing units.

Stacy Smith* is a 35-year-old Charlottean. She was at the top of her class when she received her GED through a joint Charlotte Area Fund and CPCC program. You may have unknowingly met her at one of the popular local restaurants where she has worked.

For a short while, she attended classes at Johnson and Wales University. She is also mother to three children, all of whom live in other states.

Upon meeting Smith, one might not guess she's been living on the streets for more than seven years, the last four in Charlotte. She sets up each night at one of many pop-up camps that develop throughout the city. Some of these camps remain in place for months on end. Some are cleared out by police or the folks living there simply up and leave.

Smith eats most meals at St. Peter's soup kitchen at Urban Ministry Center (UMC), a resource center for folks experiencing homelessness in Charlotte, or with a camp group if they have food and a safe place to cook.

Despite these daily struggles extending years beyond when she hoped they would, Smith has kept a positive attitude. Her case manager at UMC, Allison Winston, noted that most people who have been homeless for as long as Smith have given up hope for a different life. "Stacy has found a way to remain forward looking," she says.

Smith fits the "chronically homeless" definition, meaning a person with a disabling condition who has been homeless for one year or more or has experienced at least four episodes of homelessness in each of the past three years. She suffers from post-traumatic stress disorder caused by physical and sexual abuse that occurred during childhood. She is one of 345 remaining on Charlotte's Chronically Homeless Registry. Within weeks, she hopes to join the hundreds of people that have been removed from that list over the last year.

The Chronically Homeless Registry was created in January 2015 by Housing First Charlotte-Mecklenburg (HFCM), a coalition of 28 private companies and nonprofit organizations, as a first step in its plan to end chronic homelessness by the end of 2016. The group has helped find housing for 323 people since its founding.

Much of HFCM's success can be credited to its use of the Housing First initiative, which focuses on finding housing for the chronically homeless before all else. In 2012, the initiative was still a hotly debated topic, as Housing Readiness advocates argued that the chronically homeless need to be drug-free and/or medically compliant before they could be deemed stable enough for housing. Neighbors of Housing First complexes also worried about living near large groups of people who may be battling addictions or other issues. 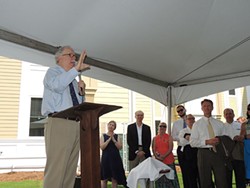 The Housing First philosophy originated in New York City and Los Angeles in the 1990s. According to Liz Clasen-Kelly, associate executive director of policy and outreach at UMC, Housing First has been successful because of the assertion that a homeless person is more likely to succeed if given a place to live. Medical support, connections with social workers and all other services come after that.

In 2008, UMC received a grant to pilot a program with scattered sites throughout Charlotte using the Housing First method. UMC worked with property managers to find homes for 14 chronically homeless individuals. The new residents were assigned case managers to help give support and connect them to resources they needed to succeed.

"When we started our program, there were people who thought that this idea wouldn't work because [the homeless] were not ready for housing," Clasen-Kelly says. "There were other people who thought this idea would work, but that our community was not ready for it. The notion was that we needed to start out small with the pilot project and eventually go bigger. What we learned immediately upon starting that pilot is that we saw individual transformation. We knew we needed more of it."

Later that year, UMC announced its plan to raise $10 million dollars to build Moore Place. The complex includes studio apartments for individuals struggling with chronic homelessness. Medical staff and social workers are on site to provide support. Despite controversy and criticism from the surrounding community, enough funds were collected through government entities, a local housing trust and public and private partnerships.

Moore Place opened in the Druid Hills neighborhood in 2012 with 85 units. As was reported in a Creative Loafing feature story published in May 2013, the Druid Hills Neighborhood Association quickly came to see the complex as a positive addition, despite original concerns from some members.

Four years later, Darryl Gaston, who has served as president of the Druid Hills Neighborhood Association during that time, said Moore Place tenants have made good neighbors.

"Over the past few years we've had an opportunity to strengthen our relationship and we've been involved with several collaborative efforts in and around our neighborhood," Gaston said. "It's been a positive relationship.

CMPD officer Greg McTigue, an area coordinator in the Druid Hills neighborhood, says he hasn't seen any signigicant rise in crime or drug-related incidents in the area since Moore Place opened. He also says Moore Place management has helped CMPD deal with some of the loitering and panhandling issues that existed in the area before they moved in. They helped find housing for some in the area, whether in the complex itself or through other scatter-site programs.

"They would try to assist us in helping some of the chronically homeless that were causing us problems on the street and had no place to go," McTigue says. "We would coordinate with Moore Place to see if there was any way we could help them. They gave them assistance, and they took that problem away."

A 2012 UMC study of Moore Place tenants found that each tenant was being housed and provided amenities for about $14,000 a year each. That's compared to a $39,500-a-year cost to taxpayers for each person left on the streets. A UNC Charlotte study done last year found that taxpayers saved more than $2 million during Moore Place's first year alone.

Just weeks ago, Moore Place opened an additional 35 units in the complex. Dale Mullennix, long-time director of UMC, spoke at the Moore Place expansion celebration on June 15. He cheered the fact that lives were being changed by Moore Place, but also reminded the audience of the doubt prevalent when the project was introduced.

Mullennix then followed with the big announcement of the day: the launch of HFCM's new capital campaign to raise $12 million for a new Housing First complex. The 120-unit complex will be built on a 2.4-acre lot on Wilkinson Boulevard and has the potential to cut Charlotte's existing chronically homeless population by more than one third.

Sam Anthony, 55, has been a resident of Moore Place since it opened. Creative Loafing spoke to Anthony in 2013 while he was still acclimating to his new life off the streets. His main goal then was to follow the rules and keep his apartment. 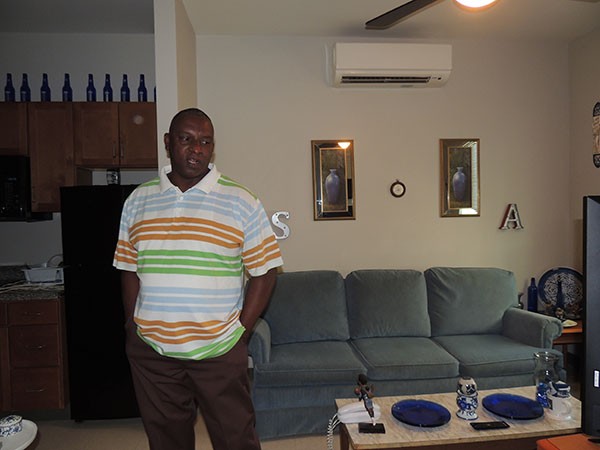 Three years later, Anthony is still grateful for his Moore Place apartment, but he's eyeing a more permanent home, possibly in a senior living center. He admits that interactions with other residents at Moore Place are not always positive. He has a problem with one resident in particular, who he claims has made racial remarks to him on multiple occasions.

"There's a bad apple everywhere. I can just single myself out from them. You know what some people are doing, that's not my problem," Anthony says. "I keep going about my business. I am thankful for my place and they should be too."

Anthony likes to keep to himself or volunteer. He has built beds for children and helped collect items for people in Haiti while working with Neighbor to Neighbor, a mentoring program that's part of the Urban Ministry Center's HousingWorks program.

"[Neighbor to Neighbor] has done a lot for me. I can communicate with more people and they have activities going on besides what is here," Anthony said.

Terry Mintle has volunteered with Neighbor to Neighbor since Moore Place opened. He helps residents transition back to social living.

"The social skills that are necessary to survive on the streets are different than the social skills we would have on a normal day-to-day interaction. We take residents out to start introducing them into what we would call normal social environments," Mintle says.

Education opportunities and employment assistance are available to tenants. Many, like Anthony, participate in service projects connected to Room In the Inn, Loaves and Fishes and Beds Equal Dreams.

For Stacy Smith, the happy ending to her long and dangerous road may finally be approaching. Just three months ago, she began to seek housing after being robbed and attacked three times. Women are extremely vulnerable on the streets. It is rare for them to camp as Smith does. Usually they stay in shelters, hotels or find protection through a homeless man.

Smith starts a new job at a Dilworth restaurant in July, one she found on her own. She doesn't like to rely on others. "I have always been a hard worker. I am not a beggar. I have always relied on me," she says.

With the help of UMC staff, Smith's assessment and application for housing were rushed through the system. Housing opportunities are prioritized by a person's vulnerability, and hers was considered high. Smith met her new case manager last week to review housing options.

She has ideas about where she wants to live and what she will do when she gets there.

"I want to get therapy for myself and get back to Johnson and Wales," she says.

But for her and hundreds of others like her in Charlotte, it's first thing first, and that's housing.