Coffee and cigarettes with one of Charlotte's forgotten souls

As I sat in a Starbucks in Uptown Charlotte recently typing away at my computer, I noticed many people walking back to work. Lunch hour was over and I could tell by their collective expressions that the work anxiety was building. These thoughts were interrupted by a coupon being slid on the table next to my laptop.

I was immediately suspicious when I saw a man whom I took to be a LYFT driver circling me. I sat on the tall bar stool and a list of potential excuses ran through my mind.

'My partner drives me everywhere.'

'Thank you for the coupon (now go away).'

I continued to type and pretended I didn't notice this person but I could tell he wasn't going away. I gave him a glance as he took a seat next to me.

"What are you drinking?", he asked, staring at my coffee cup. "Chai latte, I think. It's almost empty."

He looked at me and asked if he could have my cup. I had no idea what he wanted to do with it but curiosity compelled me to agree. He gave me a mischievous wink as he grabbed the cup and walked to the register. I watched as he had a conversation with the barista. He came back and sat down as if nothing happened. The cup was full of coffee.

"You can get a free refill if you're smart," he said, smiling.

He then suggested that we move to the Mecklenburg Public Library, where the Wi-Fi is stronger. As we left he extended his hand and said, "My name is Raul Rivas. I'm very happy to meet you."

His gentle handshake and smile was a welcoming gesture. I didn't feel like I was meeting a new friend. I felt like I was reuniting with family.

I soon noticed that Raul was picking up cigarette butts from the sidewalk as we walked. He put the mostly spent cigarettes inside a plastic mouthpiece that he saved from a cigar. As he lit the cigarette it made me question my previous assumptions. It was shortly after this moment that Raul revealed to me that he had been homeless for more than a year.

Raul was employed at the Philip Morris plant in Concord, North Carolina until it closed in 2007. His position was eliminated along with over 2,000 others. He had worked as an electronic analyst in the plant, where he used a specialized computer system to monitor quality control standards throughout the facility. He had a bachelor's degree in electrical engineering. He thought the job would help him support his family until retirement.

When Raul was laid off he faced several challenges. He learned that the specialized knowledge he learned on the job did not apply to most engineering positions. He faced severe depression and battled with alcohol addiction. He never again found meaningful employment.

When Raul's unemployment ran out, he was forced to depend on his elderly parents for support. Facing their own increasing health problems, his parents could not provide the platform that Raul needed to get back on his feet. Raul's mother passed away and the family scrambled. His father was not able to support himself on his own and was forced to live in a nursing home. With his primary support system gone, Raul eventually joined more than 2,000 other homeless people living in Charlotte. 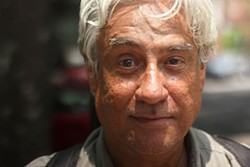 Finding employment and getting back on his feet would now become much more difficult. He was forced to comply with the daily schedule of different homeless shelters and bus routes, making it difficult to make appointments for potential job opportunities.

Raul still tries to maintain a relationship with his two children. Recently, Raul's 35-year-old daughter visited Florida from Venezuela with his two grandchildren. He was never able to see them before because he couldn't afford the trip. Raul's 17-year-old son remains optimistic about Raul's situation. He shares with his father the belief that an opportunity will present itself and Raul won't be homeless forever.

As we walked into the library, Raul was immediately greeted by a librarian. It became clear to me that Raul was a regular.

"Come upstairs, I know a great spot," he whispered. I followed him to a seat next to a window. We both looked out the window together. With hushed voices we talked about how beautiful it was outside.

I looked at Raul and realized that, even in such a difficult situation, he is still able to smile. He took a drink from the Starbucks coffee cup and let out a content sigh as he watched the wind blow the leaves on the large oak tree outside. For folks like my new friend Raul, despite the seemingly unbreakable cycle they're stuck in, the coffee cup is always half full.