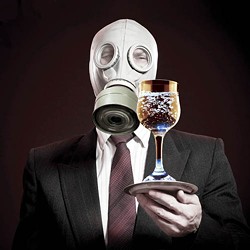 If you're like most people, you turn on lights and your collection of electronics without giving much thought to where electricity comes from or how it's created. And, until December 2008, when an earthen dam burst in Tennessee spewing more than one billion gallons of coal ash sludge into a river and across 300 acres of land, not many people thought about the waste generated by energy production either. "It was completely under the radar," says David Merryman, our Catawba Riverkeeper.

Coal ash, most simply, is what remains after coal is burned to generate electricity; like burning wood in a fireplace, there's a little something left over after coal is incinerated. But because there are many sources of coal, and because each coal plant has different technologies in place to manage the waste, it's difficult to say definitively what any given pile of coal ash contains. In general, it's understood that coal ash is a mix of a variety of heavy metals, including, but not limited to, arsenic, mercury, lead, chromium , barium, selenium and cadmium — all of which are recognized by the U.S. Environmental Protection Agency as hazardous heavy metals individually. "The thing about coal ash," says Donna Lisenby, an activist with the Waterkeeper Alliance and Appalachian Voices, "is it's a toxic soup of all of them."

There is no doubt regulating coal ash is one of the major issues facing our nation today, but it's also a massive issue for Charlotte — and not only because Duke Energy, which is headquartered here, will be impacted. In response to the Tennessee coal ash spill, the Environmental Protection Agency identified 49 high-hazard coal ash ponds across the country, a dozen of which are in North Carolina. (Duke Energy owns 10.) Four are near Charlotte, and two of those discharge wastewater just upstream from where Charlotte Mecklenburg Utilities withdraws 80 percent of the area's drinking water from Mountain Island Lake.

That's why, with an eye on protecting the nation's fresh water supply, the EPA decided to regulate coal ash waste for the first time in its 40-year history and after only three decades of debating whether or not coal ash is hazardous. The agency's proposed regulation includes two options: One will categorize coal ash as "special" (or "hazardous") waste, require federal oversight and set a timetable for clean-up. The other won't. Under the non-hazardous option, the state is in charge; this bothers Merryman, who says the state had its chance to regulate the heavy metals that flow into our water daily and have proven its unwillingness to do so.

In an effort to decide which option is best, the EPA is hosting a series of seven public hearings across the U.S., one of which will be in Charlotte on Sept. 14.

Not surprisingly, there are strong opinions on both sides of the debate. Erin Culbert, a spokesperson for Duke Energy, says the company is in favor of federal regulation but calls a hazardous waste classification, "complete regulatory overkill. It just isn't hazardous waste." The company claims the ponds don't adversely impact the environment and that, since it currently plans to shut down its Riverbend plant — the one discharging heavy metals into our drinking water — in 2015, "It really doesn't make economic or business sense for us to dredge and line the ponds when we're about to close it."

Meanwhile, environmentalists say that just because the EPA has failed to classify coal ash as a hazardous waste in the past doesn't mean it's not. They also chide coal and waste management lobbyists for turning the conversation into one about money instead of one about what's best for the health of the average person and the environment. They feel this may be their last chance to get coal ash re-classified as hazardous waste; but they're hoping to win the battle, citing the Obama administration's repeated claims that it will put scientific research and public health ahead of corporate balance sheets. That methodology works for Lisenby, who says, "What's most remarkable about coal ash waste is it's yet another example of how corporate fat cat polluters have continued to avoid oversight. It's about time we, the people, stood up."

To keep coal ash out of the air, it's often weighed down with water and pumped into holding ponds. But not all coal ash ends up in the sludgy ponds. Some of the waste can be re-purposed for use in things like concrete and asphalt. The EPA actually encourages such uses since the waste is encapsulated in those products and can't be washed away by rainwater; however, officials at the industries that purchase coal ash as an ingredient claim listing the substance as hazardous waste will stigmatize their businesses. At the same time, energy company officials claim cleaning up coal ash landfills at their plants and elsewhere, and finding new ways to dispose of the waste, will force them to raise rates.