JaggerMouth Fights the Clock to Put Out Second Album

Inside an unassuming two-story, '70s-style brick house buried away in an east Charlotte residential neighborhood, where you'd more likely find some boring domestic scene playing out, the members of JaggerMouth are creating controlled chaos.

Within seconds of entering, I am handed a light beer, which comes with an explanation. "It keeps us from getting too drunk," says 28-year-old guitarist Nic Pugh.

The house doubles as the home of drummer Jake Porter, also 28, who's in the process of building a new studio at the same time the band is recording its latest set of songs, The Album Formerly Known as Record. It's slated to drop Aug. 11, the same day JaggerMouth is scheduled to do a record-release show at the Visulite Theatre.

Right now, though, the band members are worried they may not pull it off on time. Their self-imposed deadline seemed simple enough to meet back in March. "Six months away? Yeah, we can totally do that," Porter says, recalling their springtime optimism.

"And now we're pulling our hair out," Pugh interjects, as the clock ticks away.

Lead singer Matt Wheeler is the only member not present at the moment. He's sitting behind closed doors, laying down a vocal track. Porter, Pugh and the other members — guitarist Joe Boyland, 24, and bassist TJ Banks, 29 — point me to a nearby smoking room, where we light up and chat about JaggerMouth's album-in-progress. When I point out that the band seems to have been working hard, Pugh laughs.

It's been two years since JaggerMouth released its debut longplayer Synthetic Me, a straight-ahead rock album that formally introduced the band to the Charlotte musical landscape and solidified its reputation as one of the Queen City's premiere party bands. If you've seen JaggerMouth perform live, you already know the group's shows are equal parts music and style.

But their reputation for carefree debauchery is more than just a stage persona. 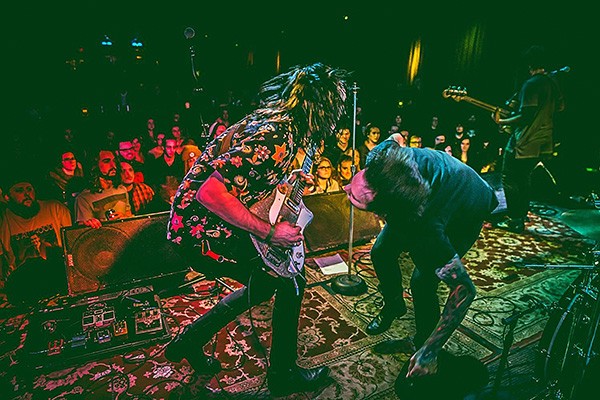 Until recently, Pugh and Banks shared a rental house with a revolving cast of roommates — accurately described as "characters." They hosted so many get-togethers that they eventually had to warn people not to walk barefoot on the grass, due to the many broken bottles and shards of glass embedded in the dirt throughout the yard. After one too many break-ins at the house, which sat on the outskirts of Plaza Midwood, the band moved out.

But while the party seems to have settled down a bit, the debauchery continues to provide worthwhile fodder for new JaggerMouth material. One track on the new album tells the true tale of Pugh and Banks' 4 a.m. journey to Brooklyn, New York, on a whim, with no money and no solid plan for what to do when they got there. The trip caused JaggerMouth to miss a show after Pugh got a severe eye infection. As Banks tells it, Pugh had touched the rails inside a subway train and then rubbed his eye, confirming the old adage, "You can take the boy out of the country, but you can't take the country of out of the boy."

And then there's the title track, which not only rocks out like earlier JaggerMouth, but also sends up the band's rowdy image. It essentially functions as an ode to fucking up in public, appropriate for a band that kicked out its former bass player after he drunkenly tried to start a fight in the middle of a show at Snug Harbor.

That incident had the band members and a security guard simulteneously telling the guy he was no longer welcome on the premises or in the band.

In the lyrics to the first single, "Stillwater," JaggerMouth takes the piss out of itself by acknowledging its reputation. "My idiot life/Your entertainment," Wheeler sings, and then later, "Ask me how I've been/As I sit in the corner/Feeling like a mess/Looking like Rocky Horror." That bit of clouded sunshine is the album's party anthem. Things only grow darker from there.

"We tell a lot more stories on this record than the last one," says Pugh, who writes the lyrics. The guitarist is peeling the label off his beer bottle as he puts the songs in context. "These were all personal events; things that have happened either to me or my family," he continues. "One's about my house burning down when I was a kid. Another is about my dad's best friend dying in a car wreck — basically dying in his arms. And then there are a couple of songs about mental health that we kind of made up, but that have segments of our own thing in there.

"I tried to write them in a way that [makes them] accessible to anyone who hears it," Pugh hastens to add.

Wheeler is the one who has to take those dark topics and bring them to life in his vocal delivery. I ask if that presents a challenge for him? No, he tells me.

The more serious material on this album, Wheeler explains, is "more in my realm than anything else we've done. I like to think of it as acting. I get a role and I become that role. You can give me anything. I'll be fucking British if I have to be."

When I ask if Pugh provided the singer with the backstories to the songs, Wheeler says it wasn't necessary, as he was already familiar with the stories. "Me and Nic have known each other for like 12 years, so most of the stuff I knew already," Wheeler says. "We'll just hang out, talk about stuff, get real about it, you know? 'Cause we're buddies" — he laughs — "even though I hate him."

"God, I hate you too," Pugh says, also laughing.

Wheeler and Pugh met on the regional band circuit when they were 16-year-old high school students. Wheeler was a student at West Caldwell High in Lenoir, and Pugh attended Statesville Christian, about an hour north of Charlotte.

"I was a faggot in Christian school," Pugh jokes of the school, where he says it was implied that LGBTQ students had to "stay closeted or you're kicked out and have to join the military." Both Pugh and Wheeler dabbled in music projects as teens, but no bands of note.

After graduating high school in 2007 and briefly studying English at UNCC, Pugh headed out to the more culturally inclusive Portland, Oregon, where he joined the hardcore band Ghosts & Monsters. But he longed to be among close friends and family, and relocated back to Charlotte in 2012. He met Banks through an ad the latter had placed looking for a singer for his band Portlit Cove. They met Joe Boyland while touring with his Virginia-based band Friends of Friends.

Wheeler, Pugh, Boyland (then on bass), and an earlier drummer eventually formed JaggerMouth without TJ Banks. But when Boyland returned to Virginia to finish his degree in physics at Radford University, the band replaced him with the bassist that started the fight at Snug Harbor. By then, Porter had come aboard as the drummer.

"TJ acquired the part of bassist after the replacement for Joe was kicked out of the band on stage," Porter explains. "TJ just happened to be standing outside at the time the show ended and we asked him to be the new bassist."

Boyland relocated back to Charlotte full time a year ago.

Through all the volatile lineup changes, JaggerMouth has maintained a high level of musicianship, and the new album only finds the band's talent expanding.

The lyrical content isn't the only thing that's changed for JaggerMouth; the music on the new album is more intricate and intense than it was on Synthetic Me or on Keep It Contagious, the 2013 EP that preceded it.

"It's still the JaggerMouth sound, but there are definitely smoother aspects to these songs," Banks says. "It's not necessarily 100-percent party, party, party."

Assuming JaggerMouth gets the thing finished, The Album Formerly Known as Record may be one of the finest releases the Charlotte music scene has seen in recent memory.

And if the band doesn't beat the clock?

"There are like four backup plans," Porter says. "One of them is: No one answers their phone."

Our money is on the guys pulling it off in a photo finish.

We would hate to have to start asking, Whatever happened to The Band Formerly Known as JaggerMouth?