New Christmas track, album in the works for Charlotte trio

Following the release of the band's upcoming album, they can cross some of those names off the list. The album, slated for release in 2017, features special appearances by Jay Shirley (organ/piano), Nick Golub on pedal steel and John Teer (Chatham County Line) on mandolin/fiddle.

"We meet a lot of people playing around the Carolinas and we definitely wanted to have a N.C. connection, so we picked our top choices and both of them were luckily available," says Baird.

"In the studio we have a chance to flush out our songs in a way that's just not economically possible to sustain live. So to be able to make our Pet Sounds or, you know, highly orchestrated baroque pop masterpiece, we want to bring in the best players we can find and we look to our local/state community of musicians."

The 2017 album will be a follow up to the band's debut album, Might Could, released in 2014. For the new album, the trio ventured over to Kernersville to record with Mitch Easter at his studio, Fidelitorium Recordings. Local act Temperance League has also recorded albums there.

Amigo previously recorded "I Wanna Live ('Cause I Don't Wanna Die)," a surprisingly upbeat, gospel-tinged track, at Fidelitorium. Baird describes it as being a sad song on the album, while adding that it's also pretty uplifting.

"It's about the stuff that's always a cosmic bummer. It's about life challenges — loss of friends, grown up relationships — and some pretty dark stuff, but we took a '60s pop approach to make it more fun and orchestrated," says Baird.

This track is on key with the band's positive musical vibe despite lyrics that tend to deal with darker subject matter.

"It's just my natural way of processing the world," says Baird. "I tend to try to lighten up the darkness a little bit or take a little bit of a sarcastic/ironic approach to things that are reality, whether it's good things or bad things. It's kind of like personal therapy."

Amigo will be hitting the studio to finalize mixing and mastering for the new album in the coming weeks. Unlike the first album, for which they went into the studio with all songs completed, the new album will feature some tracks that were created spontaneously.

"They were just beamed out of the cosmos," Baird says.

Meanwhile, others tracks like "Underground Medicine" were a long time coming. Baird said it took him three years to pen the lyrics and, finally, the track materialized during the latest recording process. It was inspired by a Rolling Stone interview, conducted in the '70s, with country musician Doug Sahm. During the interview, Sahm says "I'm Scorpio with Capricorn risin', Gemini moon," a line that Baird has nestled into the bridge of the song.

"I'm not 100 percent, but I'm thinking about giving him a songwriting credit if I don't have to give any money to the estate," says Baird.

Another song on the album is "You're On Your Own Trip Now."

"It's directly influenced by psychedelic, highly illegal mushrooms but not in as bonehead a way as that would imply," says Baird. "It's got the groovy music but it's a fictionalized breakup song in the form of a lullaby."

Though Baird feels there's no overall theme to the album, he does believe that loss and the wisdom that comes with maturity are reoccurring trends on the album. 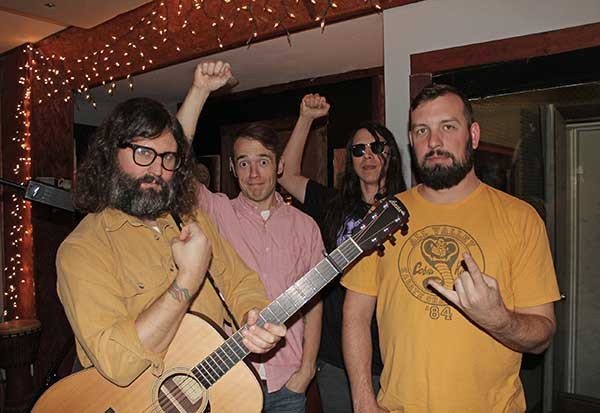 "Then again, there's also that arrested development, butt-headed, rock and roll that is definitely a part of everything we do to," says Baird, 39.

At Amigo's upcoming show at Visulite Theatre on New Year's Eve, fans can get a taste of the band's new tracks. But for those who just can't wait, the band is also planning a Christmas Eve surprise. They recently hit up the Sioux Sioux Studio to record "Kristmas in the Kremlin," a Christmas song that Baird wrote in the '90s with his friend Brent Campbell. The song is slated for release on Dec. 24 and will be available for download on the band's Bandcamp page where there will be a "pay what you can" option with proceeds going to Charlotte's Time Out Youth.

"It was one of these songs that every Christmas we ended up playing at Christmas parties or at Christmas shows. It's always got such a great reaction that it was a shame it hadn't been properly recorded," says Baird, "It's our Christmas gift to fans."