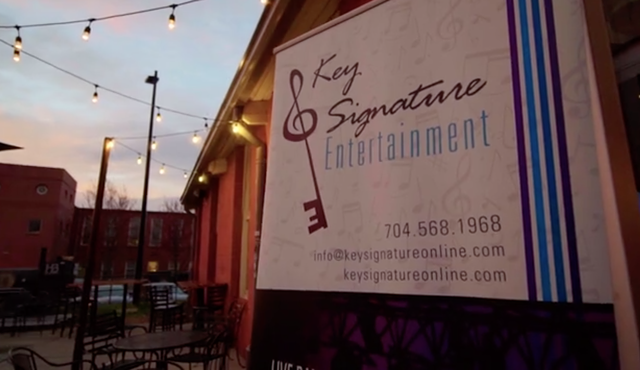 
Tremendously impacted by the global pandemic, the event industry as a whole is suffering greatly. Key Signature Entertainment, a regional full-service live music, and entertainment booking resource, based in Charlotte, N.C. is managing to stay afloat by adapting to the new way of events while also maintaining a sense of normalcy in their day to day operations.


Key Signature Entertainment (KSE), is driven by three full-time team members who seamlessly book an average of over 600 live events a year along with a team of onsite event staff. Their motto- “Good people, Good music” is a testament to their commitment to bridge event professionals and entertainers for a positive and successful experience. The synergy between the KSE trio is undeniable: Brandon, the President, Mikayla, Director of Events, and Tius, Director of Operations. Their ongoing office brainstorming sessions, countless spreadsheets, and knowing each other’s personality traits is the formula that keeps this booking company in motion….until Covid-19.


Brandon describes the last eight weeks as stressful. The responsibility of having to make decisions that affect people’s livelihood weighs heavily at his seat. Mikayla describes her experience since Covid-19 in two words- adaptive and frustrating. Everything they had worked on up until the beginning of March has changed. Covid-19 halted events. Event professionals have to re-define what events look like now and for years to come in order to try to survive. Short- and long-range plans for marketing tactics and efforts are scrapped. What people need now in terms of events is not what the need was two months ago. Now- events are becoming virtual and safety is viewed with a different lens. Tius’s word to describe the last two months is: innovation. As experts in the music business, this team is looked to for solutions to new problems. Every single day, they’re learning how to solve something new.


Event cancellations started rolling in on none other than St. Patrick’s Day weekend at the KSE office. The last event that KSE had a live artist perform at before Covid-19 was on March 13th. As advocates for both artists and their clients, Brandon, Tius, and Mikayla shared the difficulty in having tough conversations with both parties. The state of emergency sparked a sense of panic and activated force majeure. This meant having to let people out of their contracts, returning deposits, breaking the news to artists that they’re losing their source of income, and talking with disappointed clients about not being able to hold their events as planned.


Event cancellations continued rolling in as the numbers of confirmed cases grew and bars and restaurants were forced to close. Meanwhile, members of the event industry continued getting furloughed, some unsure of the status of their employment. Musicians continued to lose their paychecks, now almost three months of planned live events not taking place. Sadness inevitably sinks in when discussing the uncertainty in the lives of the people who work to bring the public nothing but joy and entertainment. Mikayla shares, “The best-case scenario for everyone has been working with people who are choosing to re-schedule rather than cancel their events.” Event rescheduling gives the KSE family some hope.


Although these difficult conversations are still taking place, the KSE team reports that the positive in all of this is that almost every person that KSE has had to speak with understands that this pandemic is out of anyone’s control. For the most part, the host of musicians and clientele have been loving and understanding despite the impact this has had on all of their lives.


For a booking company that operates off live events, KSE chose to keep working. Having to work through the most uncertain experience of this lifetime, while apart and sequestered, KSE made the decision to hold on to their team essence via virtual meetings twice a day. The team worked while in quarantine and touched base promptly at 10 am and 3 pm every weekday. Tius says, “maintaining the same level of chemistry through a computer was a challenge.” He recently had the opportunity to reunite with his teammate, Mikayla, in person. Tius says he felt the synergy return immediately in their lofty, shared office space. Although Tius and Brandon admit that laughing at Mikayla’s computer freezing up on one particular occasion while Mikayla held a catatonic expression on her face brought them to tearful laughter, they prefer to joke at Mikayla’s expense in person.


Key Signature Entertainment while maintaining their daily team calls, also kept up with their memberships in external organizations in order to maintain their relationships with other event professionals. The International Live Events Association (ILEA), Charlotte Chapter started weekly “Virtual Hug” Zoom Calls as a way to connect and support each other. Tius and Brandon took part of these weekly calls. Mikayla continued her involvement on the board of the Charlotte Chapter of the National Association of Catering and Events (NACE) through virtual board meetings, virtual chapter meetings, and virtual member hangouts, along with participation in the Triangle National Association for Catering and Events (NACE) virtual meetings as a way to stay connected. Meeting Professionals International (MPI) Carolinas Chapter hosted its first-ever virtual board retreat. Brandon, MPI Carolinas Chapter board member, was a part of this innovative meeting. In a matter of three weeks, a team of event professionals partnered together, led by Spark by Design, to launch the Spark Party Pack. KSE was honored to be the virtual entertainment resource in this creation.


Tius shared that he’s most proud of staying visible and relevant through this time and his teammates agreed. This busy trio accomplished this by maintaining daily operations. The way they do events took a 180 turn, but the framework stayed in place. Mikayla is most proud of the huge undertaking of KSE’s Virtual Concert Series launch. Planning a virtual concert series, rather than a live music series has its limitations when they can’t see people. It brought on new challenges like providing instruction on how to point cameras, test audio virtually, and other “learn as you go” moments. The team hosts virtual live concerts weekdays at 4 pm showcasing a variety of musicians. The virtual concert series has been featured in stories and publications on: WSOCTV, Charlotte Five, and Charlotte’s Got A Lot.


The virtual concert series is a way to maintain internal processes, continue marketing efforts, and support local artists by offering a consistent platform for the community to appreciate their talents. Gratuity for their talent sharing is directly welcomed, managed, and appreciated by each individual musician. With community support during the entire month of April, the team chose to continue the series through May.


Brandon is most proud of being able to push forward. He openly admits that he has experienced what he calls “silent panic,” silent because they kept it internal. Tius jokes and empathized that the silent panic at some point became part of breakfast for him. Despite having to make quick adaptations, the team held it together for the sake of the KSE family and the public. Brandon proudly shares that through these uncertain times, “we just couldn’t give up.”


The team carries onward. Brandon knows that live events will simply be different moving forward as he thinks and plans ahead. Tius looks forward to running around in the heart of a festival and watching it come to life. Mikayla hopes for the days of having live music more accessible again. She describes being among friends sitting in lawn chairs, with a beer in hand and her Pomeranian, Lola, in the other. In these last few weeks and as socially distant events are permissible, she has been to exactly two, small, and socially distant live music events. She recalls both occasions and says she looks forward to losing track of the number of live events she attends in a season. On May 10th, Key Signature booked live music for its first socially distant event since March 13th, giving hope that live music concerts will be here sooner than later.


Brandon has always enjoyed watching month-long plans come to life. Events are planned several months in advance. For him, he looks forward to the days of seeing how much joy live events bring people. “There’s nothing like standing backstage to see a flood of people enjoying what you created,” Mikayla fondly reminisces.


Although live entertainment looks different for months to come, if not years, the team remains hopeful. Brandon optimistically shares, “It feels like I’m starting the company again, but this time I’m not alone. Things are going to be different. We’re going to pivot and adapt and we’re going to be stronger for it.”