Brad Ledbetter is a homebrewer — and a programmer — at heart. Anyone visiting his brewery will see both passions at play.

After moving from Salt Lake City, Utah, where the laws surrounding alcohol are a little more strict, back to North Carolina, he opened Thirsty Nomad Brewing about two years ago.

You may not have seen Thirsty Nomad, as it's a hidden gem tucked away on Stuart Andrew Boulevard in the Yorkmont neighborhood of southwest Charlotte.

But don't count it out.

One of the most notable things that sets owner Ledbetter and his brewery apart is that his background in software and programming lends itself to his approach in brewing new beers and sharing it with the community.

After analyzing the style, flavors, percentage, color and mouthfeel of the beer he's interested in creating, he delves into research and designs and develops a recipe over a few weeks.

He'll create the recipe, let it sit for a few days, then revisit it, carefully crafting it into something that he and his team are ready to brew.

Once he implements the recipe and brews the beer, he evaluates its success. How are the patrons enjoying it? How does he himself enjoy it? Is it what the people wanted or did it go completely off the rails? Ledbetter said it's usually somewhere in between.

Once a beer is brewed, Ledbetter shares the recipe in a master Google Drive folder available for anyone to peruse and try. The recipes date back as far as 2011, when he was still a homebrewer brewing beer for fun — or sometimes for competitions, a couple of which he won.

He doesn't sit on the recipes, either. You can usually find what's on tap right now in the Google Drive, allowing any brewer to try to recreate different batches and versions of brews like Oaty McOatFace, a hazy session IPA; Companion, a blonde ale; and Thai Breaker, an American wheat ale. 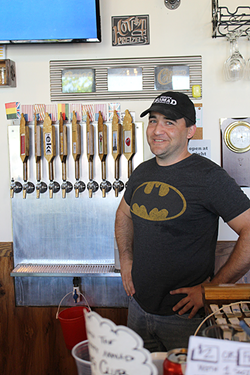 As a former software programmer, he believes in open source, a common philosophy among programmers that code should be freely available for others to use, modify and redistribute without copyright restrictions.

With this method of making recipes easily available, he hopes to cultivate benefits for both his learning and for whomever decides to try his brews at home, much like the mindset behind open-sourcing code.

He only asks that whoever brews one of his recipes bring him some to try.

"I put these recipes out there, then if somebody gets some benefit from it, great. If somebody says 'Hey, I tried this and I think it works better this way,' I'm happy to take that feedback," he said.

Ledbetter is not afraid of his brew recipes being lifted and used by other breweries in town. As brewers and brewmasters are generally proud of what they themselves make, they tend to follow the beat of their own drum, so he's not too concerned that it will happen anyway.

"Brewers are generally not going to [use the recipes]. If they do, they will not reproduce what we make here," he stated. "They may not make it as well, they may make it better. If they make it better, then great. The world's a better place for having better beer."

Ledbetter also used his programming skills to create a digital taplist on display in the Thirsty Nomad taproom. He also created a massive library of complicated spreadsheets that the brewery uses to generate its recipes.

He doesn't let trends dictate what he wants to brew and put on draft. Thirsty Nomad is only two years old, and he feels that its the "homebrewers brewery." He and his team try to keep the most popular beers on his taplist, but in the end, he brews whatever he feels like brewing, much like anyone crafting a new brew in their kitchen would decide. 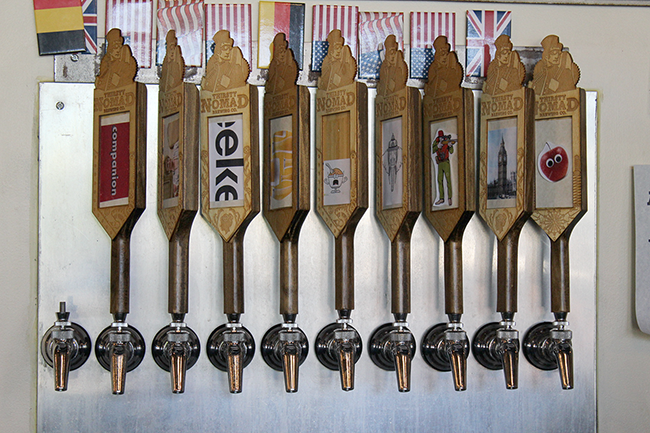 "Brad does lots of small batches, which is one of my favorite parts about the brewery: the constant change," said Lisa Adkins, bar manager at Thirsty Nomad.

Generally, Ledbetter likes to brew simple beers that don't take much work. He keeps a rotation of "most-of-the-time beers," as he refers to them, including an Extra Special Bitter called LMB. It's a style of beer that is not commonly found on taps in Charlotte, according to Ledbetter.

Coming soon on tap, Ledbetter said one should expect to see a saison-style beer from a barrel in which he has carefully kept a "biome" of different cultures over a year and a half.

These cultures then add desired flavors to styles such as goses, saisons, sours and Belgium-style beers.

In Ledbetter's case, he added a salty-but-not-overpowering orange juice that balances out the pineapple and other fruit flavors in the brew sitting in his barrel. He said it'll be on tap once he has room in his serving tank.

In conjuction with an event at the end of September, you can also expect to see a vanilla coffee bourbon stout brewed with coffee from a coffee shop in Concord.

But for now, one of the brewery's most unique beers on tap is the Thai Breaker, an American wheat ale brewed with citrus-y hops, lemongrass, ginger and Thai basil.

So it's safe to say that Thirsty Nomad strives to create a diverse set of brews in their repretoire. Vienna lagers, Belgian beers, English-style brews and sours fill out some of the other recipes in Thirsty Nomad's history.

Looking forward, Ledbetter predicts that brewers will be trending toward "super sessions" and juicier, West Coast-style India Pale Ales in the near future. He explained why when we stopped by on a recent afternoon.

"This is totally out on a branch," Ledbetter stated. "But you might see some super session styles, people going to 2 to 3 percent [ABV] beer — really flavorful beers with a light mouthfeel."

Session-style IPAs are golden in color and generally have a 3.8 to 4.9 percent ABV, crafted for longer "sessions" of drinking so that imbibers are not intoxicated after a six pack. They are still brewed with hop-forward flavors, but have less of a "bite" when it comes to the hoppiness.

In a city where breweries are by no means few and far between, it can be hard to vie for the attention of a population that wants to go to a brewery that's conveniently located, Ledbetter observed.

Although the brewery is on par with the rest of the competition in Charlotte, its biggest hinderance in reaching its potential in popularity is its location.

"We have learned that people in Charlotte don't like to go anywhere in general," he said. "They like to bike or walk to places."

It's an issue that Adkins is well aware of.

"Even though we're on social media and we're very active in that way, but again, [because of] our location, we're a destination," she said. "We're not somewhere you come across. You're coming here to come here."

Since coming on in May, Adkins has been working to make sure Thirsty Nomad stays visible in the community. The establishment not only throws weekly events such as "Geek Trivia," and monthly events like art shows and pet adoptions, but it also gives back to the community every month, according to Adkins.

For example, Thirsty Nomad will donate portions of proceeds from trivia ticket sales to Discovery Place this month, and plans to donate 10 percent of the sales during an upcoming art show on Aug. 26 to the Charlotte-based ArtPop Street Gallery. There will be local artists from Charlotte, a food truck and a two-piece band at the brewery to draw in guests for the event.

Adkins works closely with Ledbetter to create an atmosphere at the brewery that's inviting and comfortable. Not only is the taproom filled with different board and card games for patrons to play, there's also a parlor off of the main taproom with cozy couches and chairs for more seating.

There's no expectations for the patrons to know the subtle nuances of brewing and certain styles, and Adkins stated that there's certainly no niche that Thirsty Nomad fits in that could deter visitors from staying.

With the right staff and the right atmosphere, she believes the brewery's eclectic style and ambiance make it easy for a Charlottean beer nomad looking for a brewery to call their taproom home.

"At times there's breweries that you walk into and just feel like you don't fit in," Adkins said. "We're the brewery that if you don't fit in there, you'll probably fit in here."