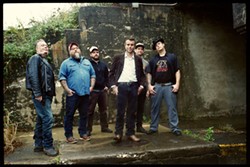 The name could belong to a bunch of metal headbangers, a mariachi band or, more interestingly, a combination of the two. But when Lucero guitarist Brian Venable revealed his band's name to his grandmother for the first time, she was sure he'd traded away his immortal soul.

"You just named your band the devil," she told him. Not so, says Venable, who insists the name he found in a Spanish/English dictionary means "any bright star." The plan, he says, was to follow that star, which would eventually lead the Memphis-based band toward worldwide recognition.

Lucero's twangy, muddy-booted country has always had a punk edge. Venable's guitar rips through the mix like a chainsaw, and vocalist/guitarist Ben Nichols projects an attitude like he's about to be spit on and is ready to jump into the crowd and mix it up if he has to. Over the course of eight full-length albums since the band's start in 1998, and with the recent addition of pianist Rick Steff and a horn section, the band has gradually adapted a honky-tonk/gospel/soul sound. But Venable says the band still loves Black Flag and the Pogues, which makes them a perfect support act for the Dropkick Murphys' Celtic punk at the Fillmore on March 7.

Lucero's latest full-length release on Dave Matthews' ATO label, Women and Work, seems like a love letter to the women in the band members' lives, a belated valentine or perhaps a stab at making amends for a forgotten anniversary or two. But Venable says it goes a bit deeper than that.

"It's less a valentine than a declaration of where we are at this point," he says. "We're not 22. We're all 40 to 50. So, if we were to go hang out with our friends, two of the things we would talk about would be those two things in some fashion."

It's by no means a flat narration. Nichols sounds like Bruce Springsteen being fed into a wood chipper, with Venable clanging out big, meaty, twangy, rock chords behind him. But Venable isn't your usual rock guitarist. Lucero is his first band — its performances his first time playing guitar in public. Even though his dad was a guitarist who played on Memphis' famed Beale Street, Venable wasn't eager to follow in his footsteps.

"I don't want to play guitar," he'd say when his dad tried to get him to learn the instrument. "I want to write poetry and hop trains and be that kind of guy." Venable literally learned to play by crafting Lucero songs. "I'd probably be real terrible if I sat in with some other bands," he says.

And even though these days the band plays high-profile venues throughout the world, Venable doesn't see any need to flash high-falutin', expensive guitars around on stage, preferring instead to play $500 Fender Highway One Telecasters.

"Most people that hear it are just excited that there's rock 'n' roll music they can sing along to or get sad to or drink to," Venable says. "I joke about us making the best records of 1972, just a little bit out of our time."

But now seems to be Lucero's time. In the 2005 documentary Dreaming In America, a film crew followed the band on the road as they struggled to build a following. "I don't know if we'll ever be as big as someone like Wilco, but I think we can do it," Nichols says at one point.

Venable thinks they're there. "As far as I'm concerned, like my dad says, we're Plan A right now," he says. "I have kids, a family. I own a house. I don't have to go to work at the shoe shop or make pizzas part time. We're doing it.