By Peyton Miller
Country music star, Luke Bryan stopped by the Charlotte area to promote his new beer, Two Lane American Lager. At a tasting, many got to experience the refreshing taste of the new beer and got to enjoy the singer perform some of his biggest hits like “Knockin’ Boots”, “What Makes You Country”, “Drink a Beer” and his newest hit, “What She Wants Tonight”. I got the privilege to sit down with Luke for a few minutes to discuss his new collaboration with Constellation Brewing and what we can look forward to as far as music and American Idol. When asked why he decided to collaborate on a beer, Luke said, “For me, beer has been a symbol of what I’m about. The outdoors, hunting, fishing, floating down a river, being on the beach, being out on my boat fishing offshore”. He says, “This beer checks all the boxes”of what he looks for in a beer, and says his mother even approves! Discussing his new album, “Born Here Live Here Die Here”, Luke said, “There are some aspects of this album that are more country than I’ve ever done. There are songs on there that feel like classic honky tonk stuff. And then there’s stuff that even, you know my current single, ‘What She Wants Tonight’ has more of a rock and pop feel.” Luke mentioned that he is very excited about his new music collaborations on this album. I had to sneak in a question about American Idol and how it was coming along, and Luke says the top ten is something to look forward to. Luke’s new album, “Born Here Live Here Die Here” is available everywhere on April 24th, 2020, so make sure to check it out. Now go to your nearest grocery store, grab some Two Lane American Lager and in the words of Luke Bryan himself, “drink a beer”! 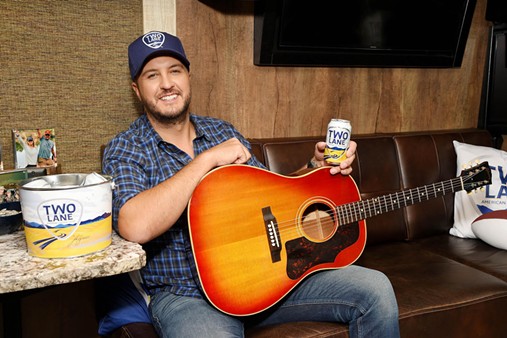 CHARLOTTE (Feb. 25, 2020) — Constellation Brands, the leading brewer and producer of high-end beer, wine and spirits, has teamed up with two-time ACM and two-time CMA Entertainer of the Year Luke Bryan to introduce Two Lane American Golden Lager. Using only high-quality, American-grown ingredients, Constellation and Bryan are proud to offer a modern take on an easy-to-enjoy, sessionable beer.

“We’re thrilled to introduce Two Lane Lager to fans in collaboration with Luke Bryan. As a self-proclaimed ‘beer expert,’ he’s the perfect complement to our expert brewers,” said John Alvarado, SVP, Brand Marketing Beer Division, Constellation Brands. “Two Lane Lager is a natural extension of our high-end portfolio, offering a clean and crisp taste that transports you to a place where good friends and good times are waiting, and the beer is always cold.”

Bryan’s support of Two Lane goes far deeper than a celebrity endorsement. He’s played an instrumental role throughout the entire process, from tasting to creative development. In fact, Bryan is so proud of Two Lane, he’s put his name on it, literally signing off on every can.

“Between my songs, Instagram posts and onstage toasts to my audience, it’s no secret that I like beer,” Bryan said. “For a long time, I’ve dreamed of creating a beer to enjoy no matter if you are hanging out at one of my shows or at home with friends and family, and [I] was so grateful to find a partner in Constellation to make that dream a reality.”

Every can of Two Lane is brewed with high-quality ingredients, including two-row American barley and water sourced from the Blue Ridge Mountains. Two Lane received its name because it’s perfect for the kinds of places you find at the end of a two-lane road — secret fishing holes, secluded campsites, dive bars — ultimately wherever and with whomever you feel most at home.

Two Lane American Golden Lager will first be available to the corner of the country Bryan calls home, hitting shelves in Tennessee, Alabama, Georgia, Florida, North Carolina, South Carolina and Virginia on March 2. This sessionable beer will be sold in 6-pack cans, 12-pack cans, 16-ounce single-serve cans and on draft. A 12-pack of cans has an SRP of $15.99. For more information, visit www.DrinkTwoLane.com, or take the road less traveled and follow @TwoLaneBrewing on Instagram, Facebook and Twitter.

Two Lane will join Bryan in the above-mentioned markets during his 2020 summer tour, Proud To Be Right Here, which kicks off on May 28. To learn more about tour dates and to purchase tickets, visit LukeBryan.com/tour.

Two Lane American Golden Lager is a collaboration between Constellation Brands and country music star Luke Bryan that brings together high-end brewing expertise and Bryan’s desire for a sessionable beer to enjoy while on tour or at home. Serving up a modern take on an easy-to-enjoy beer, every can of Two Lane has a clean and crisp taste because it’s brewed with high-quality ingredients like two-row American barley and water sourced from the Blue Ridge Mountains. Named for the familiar roads that lead you home, Two Lane is rooted in the belief that a two-lane road can take you places a highway never could, places where friends and good times are waiting and the beer is always cold. To learn more, take the road less traveled and follow @TwoLaneBrewing on Instagram, Facebook and Twitter, or visit https://www.drinktwolane.com/.

At Constellation Brands (NYSE: STZ and STZ.B), our mission is to build brands that people love because we believe sharing a toast, unwinding after a day, celebrating milestones and helping people connect, is Worth Reaching For. It’s worth our dedication, hard work and the bold calculated risks we take to deliver more for our consumers, trade partners, shareholders and communities in which we live and work. It’s what has made us one of the fastest-growing large CPG companies in the U.S. at retail, and it drives our pursuit to deliver what’s next.

But we won’t stop here. Our visionary leadership team and over 9,000 passionate employees from barrel room to boardroom are reaching for the next level, to explore the boundaries of the beverage alcohol industry and beyond. Join us in discovering what’s Worth Reaching For.

In 2019, Luke was named as the first-ever recipient of the ACM Album of the Decade Award for Crash My Party and wrapped the last ten years as the Most Heard Artist of the Decade by Country Aircheck. Since his debut in 2009, Luke has released 23 #1 hits and has more RIAA certified digital singles than any other country artist with 54 million digital singles. Luke has also tallied up seven Billion streams, 12 million albums sold, plus four Platinum albums, two 4x-Platinum albums, seven RIAA certified albums, 22 Platinum singles and 12 Multi-Platinum singles.

Luke’s headline concert tours have played for over one million fans every year for the last six years with four of those reaching 1.5 million. In total Luke has performed for nearly 12 million fans in the last ten years with seven headline tours including 36 stadium concerts, 11 Farm Tours, six years of Spring Break shows and six sold-out Crash My Playa concert events. He was recognized as a CMT Artist of the Year six consecutive times, was twice named the Entertainer of the Year by BOTH the Academy of Country Music and the Country Music Association and was honored as a NSAI Artist/Songwriter of the Year. In total Luke has won over 40 music awards including six ACM awards, six CMT Music Awards, five Billboard Music Awards, four American Music Awards, two CMA awards, an iHeart and a Teen Choice award and more.