Madam C.J. Walker: She had a dream 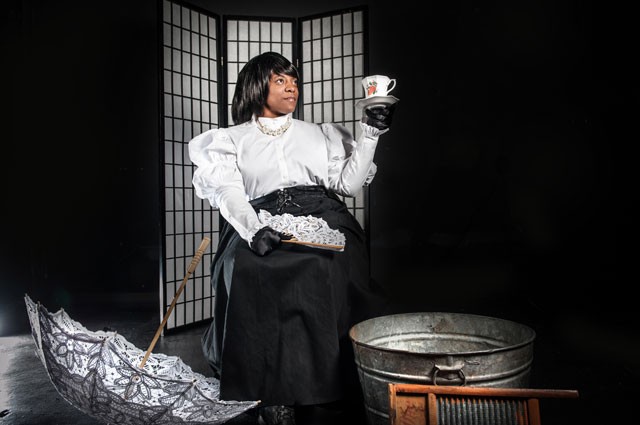 Despite conventional wisdom, Madam C.J. Walker did not invent the straightening comb. The woman who started life as Sarah Breedlove of Louisiana — the first child in her family born into freedom, in 1867 — earned fame and fortune through ingenuity, innovation and hard work. Despite hard times and loss, Walker is regarded as America's first female self-made millionaire after she developed products to help grow healthy hair, and when she died in 1919, left two-thirds of her fortune to black charities.

Kami Shalom hopes to correct the record with a transformation of her own. The Charlotte performer, writer and teacher will play 20 characters of all races, ages and genders to tell Walker's story. Call Me Madam: The Making of an American Millionaire, presented by On Q Performing Arts and written and performed by Shalom, will take the Duke Energy Theater stage Jan. 29 through Feb. 1. Walker's inspiring life translated into a local play is just one example in Charlotte of the strength and accomplishments of African-American women being reclaimed, on and off the stage.

Shalom says she's been fascinated with Walker for 15 years, since she read a book about the entrepreneur's life and found the tale "enthralling, engaging, phenomenal." Walker was orphaned by the age of 7, married at 14, and at 20 became a widow with a young daughter. She scratched out a living as a domestic and washer woman, enduring poverty and the crushing suffocation of Jim Crow America. And she ultimately excelled.

Shalom, 42, who studied English education and theater at North Carolina Central University, has spent her life teaching, donning the hats of performing artist and storyteller. She has taught through Arts & Science Council programs, including the North Carolina Wolf Trap Early Learning Through the Arts Program. But Shalom had a lot to learn about Walker. In 2008, she traveled to Indianapolis, where the pioneering entrepreneur eventually set up her business and factory. She visited the Madame Walker Theatre, did research at the Indiana Historical Society, and, she says, "saw her original products with my own eyes. When I came back from that trip, I got serious."

She shared her script with Candace Jennings — local vocalist, actress, choreographer, dancer, visual artist, arts integration facilitator, teacher and, especially for this project, director — who helped Shalom shape her vision for Call Me Madam, first performed last year. Jennings says she realized the great story the writer wanted to tell, could visually imagine how it could be presented onstage and wanted to help Shalom see her dream come true. Of their collaboration, Jennings says, "She can move me; it's exciting."

Throughout the 90-minute show, Shalom changes costumes and uses props, masks, visuals, music and her imagination to take the audience on a multimedia journey. To enlighten the younger generations, she brings a 45-minute version of her show to local schools. She smiled, she says, when after one school performance, she heard students singing the Madam Walker theme: "If you've got $2 and a dream, anything is possible."

As producer Quentin Talley, poet, founder and executive artistic director of On Q Performing Arts theater company, puts it: "It is imperative that we tell stories such as these that show our rich history and our continued resilience as a people. Our history is a part of the American narrative and is not readily available as mainstream information. Madam C.J. Walker is waaay before Oprah; she is one of the original 'started from the bottom, now we here' stories."

WHILE WALKER'S climb was improbable for a poor, African-American woman, the story of a black woman overcoming and making history is not uncommon in America. But sometimes that narrative is drowned out by tropes that are as persistent as they are false. Though we live in the age of Oprah and Michelle Obama, an opposing image, that of the drama queen, reality-show stereotype — think Real Housewives of Atlanta or Love & Hip Hop — often seems to stick in the public imagination.

"There needs to be a balance," says Shalom, of the importance of presenting a variety of images of African-American women. "Because there are so few images of us in the media, we have to be careful what we put out there." She says that's one of the reasons she wanted to tell Walker's story, and "to encourage black women to pursue their dreams."

In Uptown, at Versa Salon and Spa, owner Kisha Wright is pursuing a dream she has had since she was about 5. Wright was in third grade when she became her mother's stylist. Wright says that she admires Madam Walker because "she got her start by giving herself a start. You have to do that when you believe in something, when you create your own craft." And like Walker, Wright gives back to community causes, such as Toys for Tots and Charlotte-Mecklenburg Schools.

Versa is entering its third year in business, and Wright says she takes pride in the diverse clientele that comes for hair and skin care and salon services. "I'm not going to tell you it's easy." Taking a lesson from Walker, she says, "If it's something you're passionate about, you have to put in the work." Like Walker, who took her business across the country, training women as company representatives and setting them on their own entrepreneurial paths, Wright says she would like to grow and expand to other locations in the area — at least to start.

"Madam C.J. Walker is waaay before Oprah; she is one of the original 'started from the bottom, now we here' stories."

African-American women still face obstacles when starting a business, though not as harsh as those that greeted Walker's ambitions. Still, as reported in The Root, an online magazine of African-American news and culture, in December, "African-American-owned businesses are the fastest-growing segment of the women-owned business market and are starting up at a rate six times higher than the national average for all new firms."

The article, which quoted from a Center for American Progress study called "State of Women of Color," said, "The entrepreneurial spirit is strong among African-American women, who today own 1.1 million firms within a variety of industries, top among them being social assistance and health care. In fact, the number of companies started by African-American women grew nearly 258 percent from 1997 to 2013." This was despite black women experiencing a wage gap with other segments of the population, and suffering "disproportionately lower rates of being insured, being employed, obtaining a college degree and being represented in elected office."

In Charlotte, according to Charlotte Chamber figures from 2007, of 89,165 firms with or without employees, 13,873 (or 16 percent) are owned by someone who is "black or African American," with 27,432 (or 31 percent) "female-owned." These successes reach back in history, to Madam C.J. Walker — a prominent example of the "entrepreneurial spirit" of black women — and beyond.

Shalom says that she believes that Call Me Madam has a special message for African-American audiences. "One of the weaknesses that we have in the community right now," she says, "is that the further and further away we get away from segregation, the more we tend to forget about one another. We're striving and struggling to make it as individuals, not thinking about the collective, which is really an African philosophy.

"Integration did pull us away from one another," she says. So while we can be glad that we can sit on the bus anywhere we want to, go to school where we want to, we're missing that connection with each other that some other communities have, she says. "This generation really needs the elders to reach out to them, and to give them some wisdom."

Shalom also says she believes that this truly American story has resonance for everyone, especially "in this climate that we're in, with so many people out of work who thought they would never be out of work, where people are having to reinvent themselves." Walker "is the queen of that," Shalom says, "the queen of reinvention. Anybody can relate to that story, no matter what your race or your gender."

Shalom says she hopes her play "will begin to reshape the picture of who we are and who we have been to America, because the washer woman, the domestic, the teacher, the nurse, all of these figures have been integral to the shaping of America, the shaping of generations of children."

Walker was "such a powerful example for us to follow," she says. "We have to be mindful that every move we make has to be strategic. We have to work hard, focus on the goals and leave a legacy for our children, without excuses."

Mary C. Curtis, an award-winning Charlotte-based journalist, is a contributor to The Washington Post's "She the People" blog, theGrio, The Root and WCCB News Rising Charlotte every Wednesday.

More Than A Millionaire

A'Lelia Bundles — noted journalist, author, speaker and foundation board officer — is Walker's great-great-granddaughter. She told the story of her family in the award-winning On Her Own Ground: The Life and Times of Madam C. J. Walker. While she has not seen Shalom's work, she said, "It's wonderful to know that so many people still are inspired by Madam C. J. Walker.

"Almost a century after her death, her example as an entrepreneur, a philanthropist and an activist still has the power to help others envision their own dreams," Bundles continues. "I love knowing that new audiences and another generation have the opportunity to learn about how she provided jobs for thousands of African-American women, scholarships for dozens of young people and funds for the NAACP to crusade against lynching.

"If there's anything I'd like others to remember about her," she says, "it's not so much that she became a millionaire — which of course was a major accomplishment at the time — but that she used her wealth and her influence to make a difference in her community."

• Children's Theatre of Charlotte is showing a one-act play geared for children 8 and up, Don't Tell Me I Can't Fly, inspired by the life and work of acclaimed African-American folk artist Della Wells. Wells will host a talk-back onstage following the 3 p.m. Feb. 1 performance. $12 and up. Through Feb. 9, times vary. Wells Fargo Playhouse at ImaginOn, 300 E. 7th St. 704-973-2828. www.ctcharlotte.org.