If you had any doubts about the durability of the Motown songbook, stop worrying. Hours of auditions for the Broadway hit Motown the Musical and its upcoming national tour meant "Dancing in the Street" got a workout. And even after dozens of renditions - in various keys and at different tempos by singers not named Martha and the Vandellas - it still sounded pretty good.

It helped that each note was sung with passion - and the occasional dance move - by the 150 or so hopefuls who started lining up outside Actor's Theatre of Charlotte on Saturday morning, hours before the 11 a.m. start time for the chance to hit it big at an open call.

Charlotte isn't Los Angeles, Chicago or New York, the go-to places for Broadway auditions. Enter "Motown" director Charles Randolph-Wright, raised in York, S.C., where one of his instructors was actress and director Polly Adkins, familiar and honored on the regional theater scene. Randolph-Wright has often returned to his roots, and particularly to Actor's Theatre, which has staged his plays Blue and Cuttin' Up. He was there on Saturday to hear each a cappella note in the first round and, if a singer impressed, a second round try with piano accompaniment.

He doesn't always make an in-person appearance at open calls like the one in Charlotte, often leaving it to casting associate Cesar Rocha from Telsey + Company, who sat next to Randolph-Wright and compared notes.

"This is where I'm from," Randolph-Wright said. "This is where talent is. People from here would not get an opportunity to go to New York or Los Angeles. Dreams don't depend on geographic boundaries." He remembered the support he received growing up from teachers, family members and all those around him. "You have the whole town behind you."

Randolph-Wright said actors from Raleigh and Charlotte are currently on Broadway with the show. "Everyone says I treat them differently," favoring them a little bit, "and they're right," he said with a laugh.

He gave pep talks to the waiting crowd in the lobby, relating his own story. Many were buoyed by his words, even if they didn't get a call back. And though he was a star to them, he told me that directing Motown gave him a chance to meet his own idols. Opening night on Broadway, with Motown stars in the audience watching and hearing their onstage selves was unforgettable, he said.

"What is Diana Ross thinking?" he wondered, until she ran onstage to hug the actress playing her.

During the auditions, Randolph-Wright was polite to everyone - experienced actor-singers as well as nervous first-timers who forgot a lyric and asked to start over. A great voice was a good start, but not everything. He was looking for certain types for certain parts and, he said, "Star quality is huge."

So, who got a second chance?

Kyler Griffin, 22, a Duke graduate (like Randolph-Wright) who lives in Atlanta, traveled from Asheville, where she is in a play at NC Stage Company. She stood out when she inserted "Charlotte" into the cities where they'll be "Dancing in the Street." It would be a "dream come true," she said, if she got a part. "Who didn't grow up on Motown?"

Mekhai Lee was also a Motown fan. The 17-year-old Northwest School of the Arts senior had attended a workshop the day before led by Rocha at his school and followed the advice to just be himself. "When you try to be someone else, it's not genuine." Lee was Mister in Northwest's production of The Color Purple, and has performed as an actor, singer and dancer in many other productions. His mother, Karla Flora-Lee, said, "The musical theater world may be challenging, but he's driven and focused." 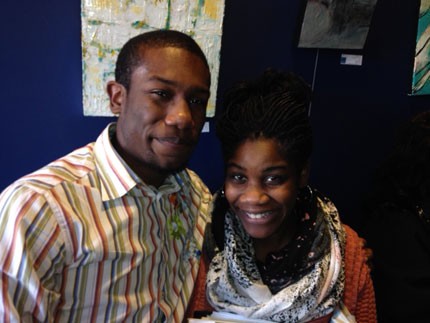 When he returned to the lobby after his two songs in the second round, Lee's good friend Phillip Johnson, 17, was shaking, and hugging everyone in sight, especially his mother, Mary Johnson-Wells. After Johnson, a Northwest senior, sang a rousing version of "Let It Sing" from the musical Violet, Randolph-Wright called him over for a hug and a few whispered words. "He told me I reminded him of him," Johnson said. "I came in here with so many doubts, but that really boosted my confidence."

As the day wound down, two maybe Michael Jacksons who had made it through two rounds with pitch-perfect versions of "I Want You Back" stood outside with parents, mastering lines for the next go-round.

If 8-year-old Sean Michael Gore of Gastonia and 10-year-old Marion Carson make it past Charlotte, it's just the beginning. The last step, Randolph-Wright said, is a final audition where he'll have Berry Gordy, the founder of Motown Records, at his side. Gordy is one of the show's producers and wrote the book, adapted from his autobiography.

"He has the eye," said Randolph-Wright of Gordy. "He sees things no one else will see. We make the call together."

After getting that OK, a Broadway audience might be easy to please.

Mary C. Curtis, an award-winning Charlotte, N.C.-based journalist, is a contributor to The Washington Post's "She the People" blog, theGrio and WCCB News Rising Charlotte every Wednesday. Follow her on Twitter.