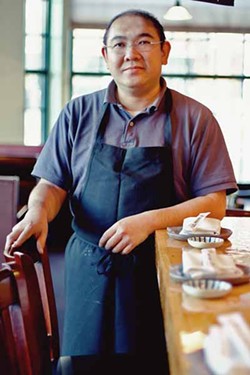 Let's face it: Mayonnaise has become commonplace in many sushi outposts. It's slathered on the vinegared rice and drizzled over slices of maki. Elegant platters often arrive with wasabi mayonnaise dotting the exterior rim. Add to this avocado and cream cheese and you have a real departure from traditional Japanese sushi. Many Itamaes have explained that these three ingredients are substitutes for fatty mouth feel delivered by the super expensive toro -- the fat underbelly of a tuna. There's even a new descriptor: Western Sushi.

Not too long ago, the only place to get sushi was in a local Japanese restaurant with arduously trained chefs. Not so anymore. Sushi may well be soon sold alongside hot dogs and donuts in gas stations. But well-crafted sushi and other traditional Japanese dishes are still only found in Japanese restaurants and made by chefs who have trained for years and have been rigorously tested on their expertise -- usually in Japan -- to achieve the status of Itamae.

So imagine my delight when I spotted some familiar faces behind the sushi counter at the 55-seat Mai Japanese Restaurant. Owner and Chef Shiramine (aka Mine) Masanori bought the struggling Yotto restaurants several months ago, but made the regrettable decision to keep the Yotto name until late January. "It was expensive to change the sign," he says. What makes this particularly unfortunate is that people in Charlotte who remember Masanori from his first Mai Restaurant, which opened on South Boulevard in 1997 and closed two years ago, didn't know he was here. Some with older sushi addictions will remember Masanori as a sushi chef at the fabled Charlotte restaurant Tokyo, where he worked for the decade preceding the establishment of Mai.

To complete Mai's kitchen pedigree is Chef Yoshida (aka Yoshi), a Master Sushi Chef who earned a Fugu (puffer fish) License in 1989. Fugu is that fish that, if not prepared exactly, can be fatal. Chef Yoshi has worked in Tokyo, California and Charlotte, most notably at the Tokyo Restaurant.

The interior of Mai is sleek and perfunctory with pale green walls: a dining room which emphasizes simple and servable over complicated and costly. The aesthetics of modern Japanese design are clearly in evidence. Over the sushi bar hangs a black banner which creates instant festivity. Mai is a modest Japanese restaurant where the dishes are myriad and small, yet the food is decidedly large. Besides, ya gotta love a place that lists "fried squid leg" on the menu rather than tentacles, or calamari, or Ika Geso Kara-age, the Japanese name.

Among the starters are the usual suspects of edamame, a gossamer-like shrimp shumai, beef tataki, gyoza and miso soup. But the unordinary fills the ranks, too: yakizakan or grilled salted fish; the cold and hot tofu dishes of hiyayakko in a ginger sauce and the delicate agedashi-dofu, cornstarch-dusted tofu, deep fried, and served with dashi sauce; and kimpira.

"Don't get it. You won't like it," my waitress directed when taking my order for kimpira. "Not even all Japanese like it." But she took the order, and later came by to hear my positive assessment. Kimpira is made with julienned gobo (burdock), a root vegetable with a complex heavy smell like lifeless earth in winter, which is paired with sweet raw carrot and then sautéed in sesame oil. It's quite good, actually.

Yoshi's sushi is deliciously arranged and bears the most elemental flavors; perhaps not the most inventive, but a solid performance nevertheless. Masanori noted that this restaurant has far fewer Japanese ex-pats than the South Boulevard location.

The rolls are canny variations on Charlotte's current favorites while his nigiri tastes of the sea. Longtime fans may seek the familiar: donburi, tempura, hibachi, and teriyaki. Masanori will happily prepare his famed Shabu Shabu, a Japanese beef hot pot, for those who ask. The wine list, although brief, has a well-chosen collection of wines to pair with Japanese cuisine: Pinot Grigio, a floral Torrontes, German Riesling, a couple of New World Chardonnays and Savvies, and a Spanish sushi wine. Mai also carries a variety of red wines, Japanese beers, and cold and hot sakes.

Mai's prices are recession-friendly: Entrees range from $8 for a cubed chicken rice bowl to $25 for a beef teriyaki bento box with miso soup, shrimp tempura, seaweed salad and gyoza.

Artistry and fresh ingredients are the keys to greatness for a Japanese restaurant. Given the fact that Charlotte is not a waterfront property where an Itamae can walk a fish market to select the fish for the evening, Mai does succeed in striving toward excellence, albeit with an American bent. But if you're looking for the actual, you can find that here as well.

Do you know of a restaurant that has opened, closed, or should be reviewed? Does your restaurant or shop have news, menu changes, and new additions to staff or building, upcoming cuisine or wine events? To contact Tricia, send information via e-mail (no attachments, please -- these are destined for the spam filter) for publication online: