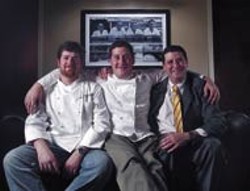 Michael and Laurence Gottlieb both knew they wanted to be chefs when they grew up. After all, food has been the family business since 1884. Their great-grandfather, Isadore, founded Gottlieb's Bakery, a Savannah institution for more than a hundred years. Gottlieb's earned a place in the city's collective memory for its chocolate chewies, an addictive and delicate cookie crafted from a scrupulously guarded recipe.

Though the bakery strived to remake itself with the times, by the mid-90s it could no longer compete against urban flight and grocery store bakeries. It closed for good in October 1994. But the youngest generation — Michael, Laurence and their brother, Richard — always remained alert for a way to revive the ancestral biz. Or some variation of it.

Michael and Laurence attended culinary school at Johnson & Wales in Providence, RI. Laurence went on to become executive sous chef at the world-renowned Inn at Little Washington in Virginia. And when a coveted restaurant space in their hometown finally became available, the Gottlieb boys pounced. Their restaurant, which also sells baked goods in the morning (including the cherished chocolate chewies), opened last year.

The taupe-tinged dining room may have the snazziest restaurant decor the city has ever seen. Witty, globe-shaped light fixtures hover like blown bubbles over a descending staircase. The bar, conveniently sequestered to a dim corner, feels like a place to meet a clandestine paramour for a little inebriating footsie. But as aggressively vogue as Gottlieb's is for eccentric Savannah, the restaurant radiates heartfelt intention. The family views this as a venue meant to enlighten and delight the city's dining public.

As it happens, it's also an ideal setting for a reunion.

My cell phone rings while I'm driving an endless expanse of highway in South Carolina, two hours outside Savannah.

"Guess who? And guess where I am?"

It's my capricious friend Carol, whom I haven't seen in several years. By freak coincidence, she's not only house-sitting in Savannah, but she just got off the phone with the husband of the couple I've arranged to meet for dinner at Gottlieb's tonight. He and Carol went to college together. Of course, I invite her to join us.

We order a bottle of racy Wild Hog Pinot Noir and catch up over Laurence and Michael's playful appetizers like "Deep South Dim Sum," a barbecue-filled pork bun with shrimp toast, and seared foie gras on a Belgian waffle with sugar cane gastrique. (The brothers collaborate on the creation of every dish, but Laurence bakes with their father in the morning, and Michael oversees the kitchen at night.)

And, as is becoming a habit on this trip, we enthusiastically overload on sweets. First, we peruse the dessert list: A homemade peanut-butter cup? Cappuccino ice cream soufflé with glazed donuts? Then the dessert cart we've seen roving around all night stops in front of us. It's filled with cakes — towering, multilayer, old-school cakes. We snag slices of carrot (loaded with cream cheese frosting, of course) and German chocolate. I hope they have to-go boxes big enough to fit these monsters.

They bring a plate of mini-sized chocolate chewies with the check in a final gesture of overkill.

As I snoop around the restaurant's downstairs level, I notice an old black-and-white picture of the bygone bakery against the far wall. Four exhausted-looking men stare into the camera as they lean on the counter. Signs are visible: "Pecan Pie, $2.50" and "We accept food stamps." Something about the picture — and about these brothers' cherished belief in preserving a family business — makes me pause. Suddenly I'm craving another chocolate chewie.