Munching Tours Take You Around the Globe in Two Hours

It's a small world after all 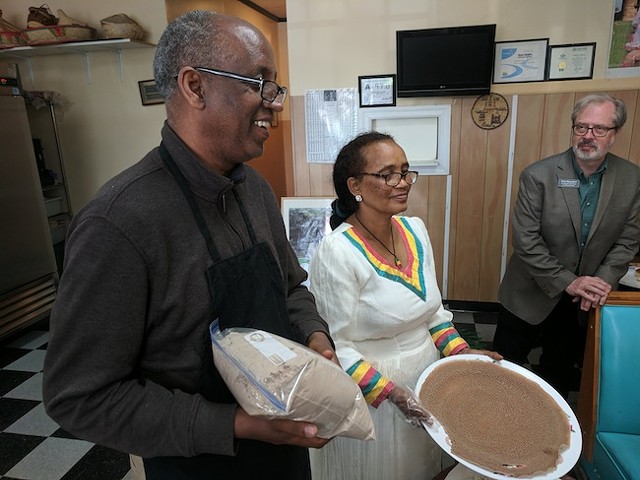 A group of seven of us sat around a couple of tables pulled together inside La Shish Kabob restaurant in east Charlotte. At the tables directly next to us sat more than a dozen Middle Eastern men, apparently a Saudi Arabian delegation visiting Charlotte with U.S. State Department representatives.

Elsewhere in the small dining room, people of different ethnicities and nationalities enjoyed their food. At our table, a Latinx woman placed bowls and plates holding creamy baba ghanoush, hummus, perfectly fried falafel and lamb kabob over a soft bed of yellow rice.

When all the food was on the table, local historian Tom Hanchett, our food tour guide for the afternoon, read a passage from The Death and Life of Great American Cities, a 1961 book written by renowned urban studies writer Jane Jacobs.

The passage couldn't be more relevant in today's Charlotte.

"Cities need old buildings so badly, it's probably impossible for vigorous streets and districts to grow without them," Hanchett read from the book. "By old buildings, I mean not museum-piece old buildings, not old buildings in an expensive and excellent state of rehabilitation, though that's fine, but also good, plain, ordinary, low-value buildings including some run-down old buildings.

The shopping center we sat in was the perfect example of what Jacobs found so important about old buildings, and it served as the center of Hanchett's first "Munching Tour" of the year on May 1.

In these tours, Hanchett aims to "travel the world from a single parking lot," meaning he brings the 25 or so people who have signed up for the tour to a city block, from which attendees can enjoy food and culture from a number of different countries, all within walking distance of each other.

Perhaps nowhere in Charlotte is better built for such a project than the unassuming shopping center at the corner of North Sharon Amity and Albemarle roads, where La Shish Kabob sits.

In Hanchett's Munching Tours, that knowledge comes through food, namely the food of immigrant communities. The Sharon Amity Munching Tour covered four different immigrant-owned businesses, but various others can be found within a block of the same shopping center.

Hanchett said the tour was designed to showcase a South that looks very different from the one he grew up in.

"I grew up in a black and white South where we were supposed to be separate," Hanchett recalled. "And we are now in a Technicolor South where everything is all mixed up."

Hanchett even coined a term, "salad bowl suburbs," to describe neighborhoods like the one we visited for his first Munching Tour. He believes the term does a better job of describing spots where cultures collide than the well-intentioned but misleading cliché "melting pot." The distinction is subtle, but important.

"I am not so comfortable with melting pot because it connotes the fact that you're supposed to give up all of your traditions and become something new. We are definitely becoming something new, but we are all keeping pieces of our traditions, and that's a tasty thing," Hanchett explained. "They're all mixed up like veggies in a tossed salad. It's not melting. Though there's a little bit of interesting fusion at the edges sometimes."

All those cultures coming together in one spot can bring tensions sometimes, too, and city leaders hope to use Charlotte City Walks to inspire ideas about how to better integrate immigrants into Charlotte communities. 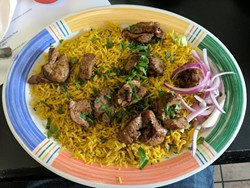 Tom Warshauer, assistant director of community engagement with the city's Housing and Neighborhood Services department, joining the group for the preview Muching Tour lunch. Warshauer said he plans to work with the Charlotte City Walks program — especially the Munching Tours, each of which will focus on immigrant-owned restaurants — to help the city integrate immigrants into civic life more efficiently.

Warshauer said that in recent years city planners have become more aware of an apathy for civic engagement among the immigrant population, an issue he and other city staff members hope to fix in the near future.

According to Warshauer, events like City Walks can also bring together neighborhoods where tensions have developed following changes in demographics. For example, Warshauer said the city often deals with coding enforcement calls against immigrants who don't cut their lawn as often as their neighbors, or who may park on grass because they don't come from cultures where a nice front yard is a priority.

"We know that people are uncomfortable with newcomers in old, traditional neighborhoods," Warshauer said. "People out here that have lived here for years, they don't always see the [immigrant] restaurants that are here and the [immigrant] grocery stores as serving them. They'll say they're in a food desert. Well, obviously it's not a food desert. But it's a Harris Teeter desert."

The nearby food that exists in these neighborhoods could be the great equalizer, Warshauer said.

"Some of what they're used to is gone, but what they're getting in return is pretty phenomenal, it's just not familiar. What we really want is for people to be more comfortable with one another and to be good neighbors with one another. We think that people want to be good neighbors, too, but there's a lot for them to learn on both sides about what being neighborly means."

To begin the tour, we visited Tsige Meshasha and her husband Zerabruk Abay at Nile Grocery, a hybrid Ethiopian coffee shop and grocery store that the couple owns. While Meshasha roasted coffee beans for an Ethiopian coffee ceremony and handed out snacks like bread, roasted barley and popcorn, Abay described how he spent years studying textile engineering in Soviet Russia before moving to Germany and eventually Charlotte 19 years ago and finding that all the factories had shut down. 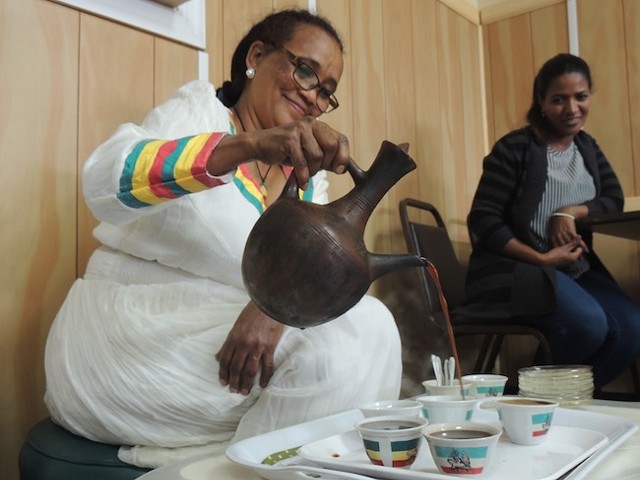 "I had information that there are many textile factories here, so that was why," Abay said when asked how he chose Charlotte.

The couple decided to pursue a Plan B, and that involved opening up Nile Grocery. They also helped establish Charlotte's first Ethiopian Orthodox church.

Though they are happy to help other Ethiopian immigrants who are looking for ingredients to cook traditional dishes, Abay and Meshasha agree that most of their coffee shop customers are American now.

The dashed dreams of working in textile no longer bother Abay.

"I prefer to live in Charlotte. It's growing good," he said. "The number of immigrants is growing dramatically in terms of numbers. And in terms of our faith, we had only one church and now we have four or five churches. The number is growing."

Shops like Nile and the nearby Rohan Grocery, a Himalayan bazaar where we would travel next, are about more than food, said Hanchett while enjoying some of Meshaha's injera, an Ethiopian bread that in recent years has become popular internationally.

"[Nile Grocery] has always been a hybrid grocery and restaurant, but the main thing that it is is a community center," he said. "We tend to think of groceries as corporate in American culture, but in the cultures that are coming here, there are small mom and pop businesses. The kids are often here at night studying, meeting friends and this coffee ceremony is an important thing about socializing in Ethiopia."

Across Driftwood Drive, at Rohan Grocery, Meena Chamlagai serves a similar role for incoming immigrants from the Himalayan region. When Chamlagai was 5 years ago, she and her family were exiled from Bhutan and lived in a Nepalese refugee camp for 18 years before finally being accepted to move to America through the United Nations High Commissioner for Refugees. 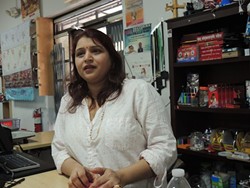 Chamlagai worked for a separate company for some years before opening Rohan Grocery with three other family members. She now uses the store as a rallying point for other refugees and immigrants who may be struggling with their arrival to the United States.

"If they organize some program, we donate, we help," Chamlagai said. "When new people come, we help them."

Within the aisles of Rohan Grocery, there's no shortage of goods for visitors looking to cook up a feast. Customers can find large bags of madras mix, kala chana, spicy green vatana, soya wadi chunks and ghee, among countless other ingredients one won't find in the local Harris Teeter.

Before we left, Chamlagai handed each tour member a piece of coconut candy and emphasized that she hoped we would return on our own. She mentioned how thankful she is for Hanchett, who began bringing his Munching Tours through Rohan two years ago, and has introduced many new customers to her store.

And that's Hanchett's mission in the end. As we arrived at our next spot, La Shish Kabob for the lunch I described above, Hanchett described how food can be the starting point for breaking down barriers.

"What we're looking at is different, and I think we are wired as mammals to be uncomfortable with difference but if you study ecology, difference is what makes ecology work," Hanchett said. "If you have bees and the flowers in different parts of the land, they all die. You need to have that multiplicity. We know from ecology that differences are the engine that drives a healthy environment, and food is a really colorful way to understand that."

About 10 years ago, Izzat Freitekh was running a sandwich shop called Abu el Ezz Sandwiches in his hometown of Old City, Jerusalem in Israel. His son, who was attending UNC Charlotte, eventually convinced him to come join him stateside.

Freitekh said he has been welcomed into the Charlotte community with open arms, and doesn't regret a thing.

"We left Jerusalem and Palestine to secure our home and our family," Freitekh told me. "I like this here. We feel more secure here."

Once we finished our meal at La Shish Kabob, we headed to the Syrian-owned Golden Bakery for baklava and other delicious pastries. That's where our world tour stopped, but if we'd had the time (or the room in our stomachs) to continue, still within walking distance were the Egyptian-owned Al Basha Mediterranean Grill & Hookah; Halal International, a Turkish market and deli; Lucky Oriental Market; and the Peruvian Mily and Lalo Restaurant.

Before we left La Shish Kabob, Hanchett described how his own discovery of international food changed his life, and how if those neighbors around this world-tour-in-a-strip-mall could embrace it, it might change theirs too.

He motioned to the Saudi delegation next to us as they enjoyed their meal and were deep into conversation.

"Izzat is here watching, listening, bringing his culture to folks, the visiting dignitaries from Saudi Arabia. Just look at that; that's the State Department, and he wants me to feel as comfortable as they do. And so that's the root of it."

That's insight you can take to go.