NoDa: An oral history of an arts district 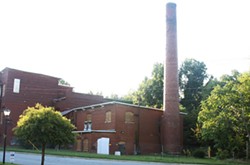 In the shadows of Uptown Charlotte, just two miles to the north, sits NoDa — short for North Davidson — the quirky neighborhood where artists blend with yuppies like specialty java drinks from Smelly Cat Coffeehouse. It's a walker's paradise, replete with colorful eye candy and clashing music, where sounds of folksingers, rock bands, slam poets and hip-hop acts bleed out onto the streets from local clubs, where art galleries and shops cater to the bohemian chic out looking for the latest outfits or funky artwork.

It wasn't always like this. Many of those who stroll artsy NoDa today wouldn't have set foot here in the early '80s. Back then, drug dealers clashed with police amid boarded-up buildings and dilapidating homes.

That didn't stop Paul Sires and Ruth Ava Lyons from finding an oasis at the corner of North Davidson and 36th Street. They saw possibilities for artists in this former mill village. Cheap rent, lots of space. In the quarter-century since these two pioneers moved in, NoDa has transformed from a dangerous neighborhood into a hipster strip that now also attracts bankers and other professionals who live vicariously amid all the creativity. But one man's face-lift is another's gentrification. For early NoDa denizens and longtime residents of North Charlotte, it's all just a little bittersweet.

CL decided to let the folks who live there tell NoDa's story.

Sires: In 1986, it was pretty well boarded up. There were a couple of bars. There was a machine shop — McCullough Auto and Electric — and there was a print shop. That was pretty much it. It was kind of abandoned and just a handful of artists. But it was a cool neighborhood. Mostly mill houses that were still intact. We could afford to buy our building for the studio space. Because it was a little business district, we could see something happening there as opposed to other parts of town with their long, long roads and lots of buildings. Our initial building, we renovated over five or six years. It was four storefronts and three upstairs. We'd rent space out to other artists.

Only a few blocks over, the residents of North Charlotte were experiencing a very different side of life. While artists were setting up shop on Davidson, Swanson (who goes by one name only) saw the neighborhood spiraling out of control.

Swanson: In 1987, I was just coming back because I had moved away. By that time, crack cocaine had been introduced, and it was a lot different around here. It went from being the neighborhood that it was to more like a gang war between cops and drug dealers. The regular people were just caught in the middle. You had everyday people just trying to live a normal life, living in a neighborhood that police had deemed a drug-infested area, which to me was a bogus profile — you can get drugs from anywhere in Charlotte.

When you came outside, you had to deal with the drug dealers making sales in front of your house and making it look bad for you. Then the cops show up, and they harassed any and everybody walking down the street. You couldn't even go to the store, and you couldn't wear nice clothes. If you did, they were jumping out on you, slamming you on the concrete, slamming you against the cars.

Another lifelong resident, Damon Crawford, recalls growing up in North Charlotte long before the drug dealers or NoDa existed.

Sires: People were afraid to come there, but for us it seemed like a natural thing to do. We'd moved to Charlotte from Detroit and Cleveland. There were artist areas [there], artist-run galleries, and it was natural to have artists taking control of their own destinies and not waiting around for someone to say, "Here, let me help you." We moved to Charlotte pretty well penniless. We put everything we had back into our studios and into our art and kept plugging along.

Revitalization came to North Charlotte by the '90s, and as more artists moved into NoDa, the old mill houses got face-lifts.

Sires: In the '90s, we opened [Center of The Earth] gallery and immediately after, other galleries opened. There was a lot of energy and a lot of guerilla-art movements, but to our frustration, we had an incredibly difficult time convincing other artists and other people to come out and invest in the neighborhood. It seemed to take forever. The next big event in the neighborhood was when [the restaurant and punk club] Fat City opened, and it gave people in the area some place to eat and gave the bohemian crowd sort of an epicenter.