Out With The Old, In With The New

Charlotte landscape sees many changes during 2005 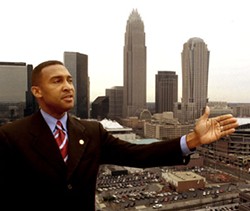 Are we there yet?

For years, city leaders have pronounced that only their particular project/boondoggle would rocket Charlotte into the league of "world-class" cities. Even those of us who know such positioning only develops organically, not at the behest of a task force or consultant, might look at the last year and think that Charlotte in 2006 had a little bit more to offer than it did the year before.

To wit: The Charlotte Bobcats Arena opened, not long before officials publicly announced proposal for yet another sports complex. The Mecklenburg County Commission voted to prohibit discrimination against gay and lesbian employees, after only a smattering of yahooism. (That same body also passed a tax increase of more than 10 percent -- the highest in years.) Hurricane Katrina brought the city thousands of new residents. SouthPark marked its first meth lab bust. And condos cropped up like kudzu downtown, er, uptown.

Outside our city limits but prominent in our memories of 2005, the war continued in Iraq. Americans watched on television as fellow citizens in the Gulf Coast died in the streets as some government officials (Secretary of State Condoleeza Rice, ex-FEMA head Mike Brown, Sen. Kathleen Blanco, D-La.) pondered wardrobe decisions. Pope John Paul II died. And the US Supreme Court shifted to the right.

Despite all that, chances are you'll remember 2005 not by the dispute-of-the-week (or even tragedy-of-the-year) but by the private triumphs and failures not detailed in any publication. But because we often tie our memories to the events of the day, Creative Loafing staffers documented a few ways Charlotte's landscape has changed in the last 12 months. We hope these images bring back a few memories and give you ideas on creating a few more to ponder next year.

For 10 years, the Charlotte City Council member groomed himself for the mayor's office. When he filed to run against Mayor Pat McCrory, everyone expected a political battle royal. Then out of nowhere, Cannon dropped out of the mayor's race and quit his city council career, citing the illness of extended family members as the cause, a claim that few in the political establishment really bought. In the process, the black community lost its premier politician. (Servatius)

Long-time Charlotteans looking for a point of reference along South Boulevard often used the landmark pub next to the railroad tracks on Old Pineville Road as a point of reference. In the summer, blues singers like Fred Jackson played there. The restaurant was torn down by the city, along with 70 other properties along the old railroad corridor, to make room for the light rail line. (Servatius)

When the Charlotte Coliseum opened in 1988, it was considered state-of-the-art. But by the time Bobcats owner Bob Johnson came calling, the venue that had hosted Springsteen, Frank Sinatra and Mother Teresa (to name a few) was little more than a relic. (Shugart)

Just over two years ago, she was arguably the most powerful politician on the city scene, carrying more clout and getting more done than even Mayor Pat McCrory. Wheeler was instrumental in getting the new arena built uptown, after citizens voted against it in an arena referendum. Four years ago, she finished first in the four-person at-large race for the Charlotte City Council. This year, she finished dead last in an eight-person field. (Servatius)

The once celebrated Charlotte-Mecklenburg Schools superintendent left his post shortly before it was revealed that the school system had been less than honest with the state about its discipline statistics. (Servatius)

The Room on Montford Drive was fast gaining a reputation as a happening spot for alt-rock and hip-hop alike. CL's Timothy C. Davis described the south Charlotte venue soon after its 2003 opening like this: "Picture a kick-ass frat house, with one important distinction. No frat boys!" Sadly, a shooting in the parking lot last summer left Charles Gaines of Charlotte dead and hastened the club's planned closing. (Shugart)

This converted church in the hipster Plaza-Midwood neighborhood had a steady stream of regional and national bands pay respects. No confessionals here, although it was a venue much-loved by local musicians as well as DJs. Themed parties thrown by some of the town's bohemian denizens and an art gallery rounded things out. (Shukla)

It took long enough, but black gays and lesbians in Charlotte finally got their own festival. Charlotte NC Black Gay Pride attracted more than 7,000 people, according to organizers, and netted the group an award from the National Black Justice Coalition. It wasn't long ago that black gays and lesbians had few places to come together, but now organizers are planning Pride 2006 for July 20 through July 23. (Shugart)