Party in the Pit

Brittney goes to the races QC After Dark 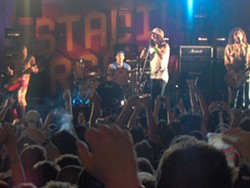 Miss me last week? It was my bye week ... But don't worry, I'm too legit, too legit to quit -- just gearing up for M.C. Hammer at Speed Street.

On Wednesday, I followed up the Pit Crew Challenge at the Arena with a trip to Tremont Music Hall for punk hunk Jared Leto. My friend Bonnie made me go so she could meet her high school sweetheart -- a relationship based solely on years of watching My So-Called Life. Leto's hot; his music, not so much. The eye candy that 30 Seconds to Mars provided was diluted by a genre of music I just can't get down to. I dance with my hips, not my head. I sustained physical abuse in the mosh pit, and my roommate even lost a toenail in the incident. It was a good scene for the junior punk rock crowd, but not so much for this hip-hopper in cowboy boots. But that's just my so-called life.

A Thursday Live After 5 run was obligatory, but the highlight of my night was a Pita Pit stop -- it's the only place I've found in the South that serves falafel. I stayed in on Friday to fuel up for Saturday's NASCAR Nextel All-Star race. The letter attached to my infield pass demanded that spectators not sport open-toed shoes, bare shoulders, or shorts. Do you know how hard it is to find something in my closet that meets those standards and works for 80-degree weather? Still, as a pit VIP, I was given free Snuggles fabric softener and Tums. Score!

A NASCAR race is like Woodstock for down-home Southern folk -- thousands upon thousands of RVs congregate days before the green flag is waved. I wasn't impressed so much with fast cars making left turns; I was impressed with the diversity of the crowd coming to watch those fast cars do their thing. I have come to the conclusion that NASCAR is EOE (equal opportunity entertainment). I even saw a tailgater with a Jersey license plate. The All-Star race had an all-star audience, including John Walsh of America's Most Wanted, Little Steven Van Zandt (of Sopranos and Springsteen fame) and various Panthers. To give you an idea of the spectacle that is the NASCAR race: After making a cameo at tailgates, rock-n-racing to Train, and dining in the media center, I went home, worked out and returned in a different outfit.

Round Two: I made a beeline for the VIP section of the "Red Hot Pit Stop" to get my second helping of punk: the Red Hot Chili Peppers. The guys from Kiss 95.1 and I were in our little world, which we referred to as "the perimeter." The party was over there, as we had a Michael Jackson style dance-off (I won). I noticed someone was squatting behind me and, in turning around to investigate, a camera flash went off in the middle of a crowd of guys. "Sorry, we just had to get a picture next to your butt." The only way I could respond to that was by telling them their excuse officially classifies as weird.

On the other hand, I had a good view of RHCP frontman Anthony Kiedis and didn't hesitate to watch him shake his punk-rock-badonkadonk. Apparently, Kiedis' hips don't lie either, and I like a musician with honest hips. I turned around to look at the stands, which were a sea of waving hands and moving mouths singing along to the Chilis' tunes. When I finally got home at 3am (after sitting in traffic for over an hour), I did laundry with my new fabric softener and ate my tum-t-t-t-Tums.

I couldn't get enough of the NASCAR nightlife, so I went to Cans' Sunday launch party for the clothing line Track Couture. The party came equipped with mini bottles of champagne, poker tables, goody bags, a pink shag carpet, Devyn Norman (the best waitress downtown) and so many photographers I felt like I had my own paparazzi. With Speed Street, the Cars premiere and the Coca-Cola 600 coming up, I must quote Jay-Z, regarding race week: "We gonna do it again."