A rundown of the Pride performers to catch this weekend

You're done with the pregame, you're ready for the main event. Now get familiar with the performers you'll be seeing.

It's surprising that CupcakKe hasn't reached the same fame and notoriety that other female rappers have. This Chicago-based rapper is unapologetic, in your face and her music is riddled with quick-witted one-liners, making her a rapper worthy of being a household name. Her most recent studio album, Ephorize (2018), shifted away from the raunchy lines of previous albums such as Queen Elizabitch (2017) and Audacious (2016) and tackled heavier subject matter like body image and LGBTQ issues. However, she still dishes out tracks that include the well-known hypersexual lines that made her an underground favorite. Writing and releasing a pro-LGBTQ anthem in the rap community is almost unheard of, but she accomplished that with "Crayons," which demands her a spot in any parade concert line up. CupcakKe will shut down the festival on Saturday at 9 p.m.

One of just a couple Charlotte performers to hit the Wells Fargo stage on Saturday, Dexter Jordan is a definite reason to show up early in the afternoon and get the party started with some smooth, soulful R&B. Jordan was devastated in 2016 when he lost his mother to cancer, but was eventually persuaded to return to the craft by his friend, local rapper/producer Yung Citizen, who wanted Jordan to contribute to his collaborative Alive Sessions EP. He later released a beautiful video for his song, "Hello, New Me," which can be found on YouTube. The feedback he received on both projects, including from singer Yebba, inspired Jordan to begin work on a new album that he plans to drop this fall. That news is music to our ears, but while we wait, we're happy to settle for live teases like this upcoming performance. Catch Jordan at 2:30 p.m. on Saturday.

"Just being a brown person and a queer person, and being visible in this context, is political ... Existing as me is political," Joseph Quisol told CL in the lead-up to the February release of his debut EP, The World Keeps Turning. Quisol's Latinx Futurism — a mix of indie rock, Latin jazz and a number of different genres — is just one part of his presence in the scene, as he's continued his work as an activist wherever he goes, from his work in Charlotte as cofounder of DIY art group Queens Collective to participating in protests against Betsy Devos at Harvard University. He graduated from Harvard in May, and in a recent Facebook post, Quisol announced he'll soon be moving to Oakland to be closer to his father's side of the family, while assuring friends and fans that "Charlotte will always be home." He's also dropping a new album on March 22, 2019, and we're hoping for a tease of it on Saturday, and maybe a collaborative performance with friend Dexter Jordan, whom we hear will be featured on the new project. Quisol will perform at 3:30 p.m. on Saturday. 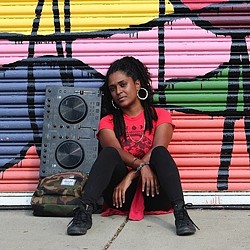 There is no better way to kick off the final day of Pride than with the sounds of DJ SPK, who will be spinning at 1:30 p.m. to start Parade Day. A long-time friend of CL, SPK has appeared on our 'Local Vibes' podcast, where she discussed the differences in the ATL and CLT scenes, which she's bounced between throughout her career. We're glad the Sour Patch Kid — named such because of her binal moods and not an affection for the candy — calls Charlotte home now, however, and is representing at Pride. If you want a taste of SPK's work before Sunday, check out both of her recent remixes — the SPK SOVR remix and the SPK P^TCH remix — of The Carters' "Apes**t." DJ SPK will start spinning at 1:30 p.m. on Sunday.

Originally a part of the a capella group Pentatonix, Superfruit members Mitch Grassi and Scott Hoying teamed up to begin a YouTube channel in August 2013. Over five years, the openly-gay (but not dating) duo has released a myriad of vlogs on their SUP3RFRUIT channel that feature silly games and competitions along with weekly song suggestions. The two diverged from their a capella style and started creating high-energy electro-pop music in 2016. Their first and only full-length studio album, Future Friends, released in 2017, features bangers such as "GUY.EXE" and "KEEP ME COMING." In a recent interview with Paper Magazine, Hoying noted the importance of pride to them and to their fans, stating, "It's so important to our fans because we are our pride and visible within the gay and queer community. It's been really amazing to see our fans inspired by that." Superfruit will perform at 8:30 p.m. on Saturday.

Florida-raised with Dominican roots, Leslie Grace has swept fans with her bilingual lyrics and beautiful mix of music genres. Her talent was not easily cultivated, however. Grace's vocal talents were nurtured and supported by her family from a very young age, which gave her the confidence to pursue a music career. Varying from ballad-like love songs written with Carole King to club-worthy sultry tunes, Grace interweaves her Dominican culture in pop and techno-style songs that never fail to get a crowd dancing. She recently released a single, "Duro y Suave" with Puerto Rican rapper and singer/songwriter, Noriel, which signals a shift away from her love ballads into pop/techno music. Grace will be on stage at 4:30 p.m. on Sunday.

Pussycat Dolls member Jessica Sutta broke away from the band in 2010 and has since paved her own way as a solo singer/songwriter. Now an American pop star in her own right, Sutta released her first mixtape, Feline Resurrection, in 2016, followed a year later by a full-length album, I Say Yes, in 2017. The former features hits such as "When a Girl Loves a Boy," and "Feel Like Making Love," which allows J Sutta to explore her own feelings in music and pop. The no-fear meaning behind her lyrics show her own maturity and personal growth in a solo career. If you were a fan of The Pussycats Dolls, then there's no reason to miss this icon in the making. J Sutta goes on at 4 p.m. on Sunday.

Regarded as an icon of the dance and LGBTQ communites around the world, Ultra Naté's "Free," is on every sensible LGBTQ anthem playlist out there. As a singer, songwriter, DJ, performer, producer and promoter for over two decades, her profilic career has produced eight full-length studio albums and a myriad of collaborations with names just a big as hers. Her songs have influences around the world and it's no wonder, as her mix of popular genres makes it easy to get moving to her songs. Naté's upbeat, electro-techno and disco-esque songs will grace this year's Pride celebration, and it's nothing less than deserved. Get ready to strut to a true dance queen. Ultra Naté is slated for 8 p.m. on Saturday.

As in years past, Chasers has partnered with Pride Charlotte for this year's event, and you can catch their afterparty in our Pride Guide listings. For the parade, they're putting on a show with drag queens Stacy Layne Matthews, Aja and Coco Montrese, all of whom hail from RuPaul's Drag Race. Who needs three kings when you've got three queens on stage at 4 p.m. on Saturday.

Stacy Layne Matthews: A RuPaul's Drag Race season 3 contender and North Carolina native, Stacy Layne Matthews is known for her poise, grace and endearing demeanor. Her rural N.C. roots lend a hand to her lovability and country attitude, but her deep background in theater and acting give her a huge boost in drag queen performances.

Aja: A drag-queen-turned-queer-artist of Moroccan, Liberian and Egyptian descent, Aja also acts, raps and has had two stints on RuPaul's Drag Race, both in a regular season and the All-Star rendition. They also appeared in a pro-LGBTQ campaign, Pride OUT Loud for H&M, and hosts a talk show called Ayo Sis. Their EP, In My Feelings, was released earlier this year, for which Aja worked alongside Mitch Ferrino, Wnnr, DJ Accident Report and AVG JO to put together a high-energy rap collection.

CoCo Montrese: Hailing from Miami, Florida, and also a returning RuPaul's Drag Race contender (she placed top 5 in season 5), CoCo Montrese is also a performer and entertainer. Most notably, Montrese held the title of Miss Gay America in 2010 and now resides in Las Vegas, but is joining Aja and Stacy Layne Matthews for a performance that one could only expect to be nothing less than fabulous. 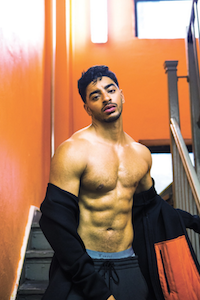 After transitioning from female to male at age 24, Laith Ashley became the first transgender model to appear in a national campaign after being photographed by Bruce Weber for a Barneys campaign. He completed another breakthrough when he walked the stage for Gypsy Sport at New York Fashion Week. Earlier this summer, Ashley continued his firsts when he became the first transgender Pit Crew member on Ru Paul's Drag Race. But Ashley isn't just about strutting his stuff on the catwalk or in big-time photo campaigns, he'll also be sharing his singing talents with the Pride crowd this go 'round. Catch him at 3:30 p.m. on Sunday.