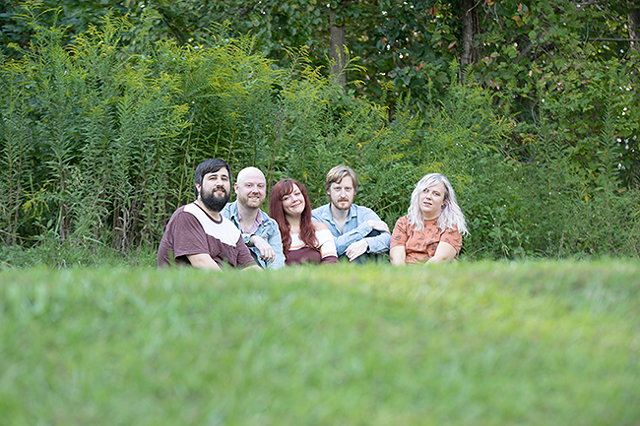 The band formerly known as Melt was once a side project that bloomed from the mind of Phil Pucci, but after the lineup changed and new members joined in 2017, it was a side project no more. It was time to rebrand.

Pucci got his start in a shoegaze band called Serfs, but then decided to begin Melt after he began writing his own songs that didn't quite fit in with the "loud sound" repertoire of Serfs.

He began Melt as a solo project. After quickly realizing that he wanted to add more musicians, he tapped Smith and a bassist to turn Melt from a solo looping project into a three-piece band.

In 2016, the trio released Repossession Blues, a nine-track album that opens with the single "Goddamn the Night," a song with a driving and present drum sound and dreamy, ringing guitar riffs. Pucci's vocals lay over the rest of the track with the lyrics, "Goddamn the night / You went off on your own ... What's left of summer now? / What's gonna come of me now? / Goddamn the summer night."

"Boy" is another contemplative track, in which Pucci's vocals ring throughout the song, asking one question directed at his cat: "What's in your head, Charlie boy?" It's a slow, two-minute song with that one lyric repeated over and over, until it gives way to a reverb fade out.

This record was written by Pucci in a different time in his life. He was, as he put it, "Bummin' around Charlotte," playing here and there as Melt back when he was single. The songs are a mix of happiness and melancholy that portray the ups and downs of single life. 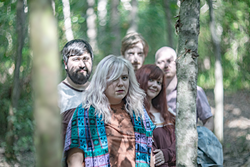 "So a lot of those songs were sort of just about generally being unhappy and also really happy at the same time," Pucci said. "Which was kind of a thing that happens when you're not dating; you can experience both those things at once."

Soon after the 2016 release, the lineup changed, bringing in Holman and Mason, on guitar and bass, respectively. They brought a new dynamic to their sound by adding Weeks on the keyboard half a year ago, filling out the line up in an "orchestra of a band of five people."

"It feels like it's the band," Pucci said about the final addition of Weeks and the full lineup.

While their Instagram account states that they're a "dream punk music group," Pucci said that's more of a declaration.

"I don't think anyone out there would agree with me that we're a punk band, but that's more like a mission statement for me," Pucci stated. "If I say that's what we are then that's who we are, even though our music doesn't necessarily sound punk, it's just good for me to think about that while we're at practice."

Sometimes it's just one person playing around until everybody joins in, and sometimes the group has a fully thought-out idea.

"We don't really have one specific way that we always do it," Smith said. "Sometimes we'll come in with a fully made demo and sometimes it's from scratch."

The ideas fly when they get together for practice, and then the members work on their own sound separately to bring back to the band when they meet again.

"That's always nice to do, you go to practice, we all have these ideas together then you go home and you get to kind of work on it yourself," Weeks said about the process of creating Pullover's songs and sound together, then separately. "And then once you spend time on that, then you bring that back to practice and then go from there."

Considering that Weeks joined the band only six months ago, it can be quite a daunting task to add a new sound to a band that already has an established list of songs, but Weeks quickly took to the music, melding her keyboard and synth with the rest of the band's sound.

"For me coming into a band with complete [songs] it's like, 'Oh my gosh, what am I going to add to this sound and this style?'" Weeks stated. "But for me I think it's just figuring out the right sound that's gonna sound good with these songs and how I can just build the sound out more."

The sound has changed and the tempo has increased since the days of Melt and Repossession Blues.

Instead of coherent vocals, Pucci has opted for rhyming gibberish words together, a style inspired by Cocteau Twins, a Scottish rock band of the 1980s and '90s. It sounds like English words that a listener can't quite make out, but in reality, the lyrics are a nonsensical string of almost-words. 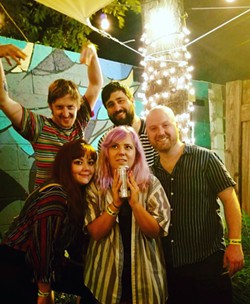 And the music of Pullover is really whatever they decide sounds good, coming together to find the right tunes in the moment of creating music.

"I think there's more fun going on because it's like everybody's just trying to find the things that sound the best to us," Holman said. "Not necessarily just to make a certain genre of music or certain mood. It's just kind of going for what feels and sounds the best at the moment."

Sometimes that means writing songs around Mason's riffs when she's "just noodlin' around on the bass," and sometimes it's a chord progression and vocal melody on which the song is expanded. Other times it could be the five of them covering something off-the-wall by another artist and trying out different songs, adding their own twist to it. But whatever it is, it's just the members having a good time together.

In the early days as Melt, the sound was "sloppy," as Pucci put it, when he and Smith were covering a mix of songs and free-wheeling in their music. But now, it's become more structured as it came to be a five-piece band, while still keeping it's emotionally raw roots.

"It's become a lot less sloppy, and being sloppy used to be a point of pride for me," Pucci stated. "It's a lot more put together. We will, in the same show, play a song that we've been working meticulously on for over a year that we're constantly making small changes to and it sounds super tight. But then the next song we play will be something that we wrote two days ago, even then it doesn't sound as sloppy as it used to. It still sounds pretty put together."

With eight or nine new songs in their pockets, the crew is hoping to record and release another album — the first release as Pullover.

When asked about the driving theme of the album, the band members laughed as Pucci said that the album would be like a '90s romantic comedy.

"Like the Can't Hardly Wait soundtrack," Pucci clarified. "Just thinking about people with blue hair drinking underage at parties and trying to hook up, and then the boy is an asshole but he turns into a good guy."

It's a certain formula in the genre and the nostalgia of that decade that drew Pullover into creating a sound that encapsulates the feeling that accompanied the 1990s. They listed off other movies they felt fit in with the aesthetic that they're going for. They spouted out classic films such as Clueless, Never Been Kissed, 10 Things I Hate About You and Along Came Polly — although the last one is an early 2000s rom-com film, it settles in with the genre's formula.

"I've watched pretty much every rom-com there is," Holman stated. "The reason why I watch them it's like this formula where you can measure them against each other because they're supposed to hit all these points and follow a template. The movies are really corny and funny but they're taking themselves really seriously, I think that's fun, but everybody's trying to do their best." 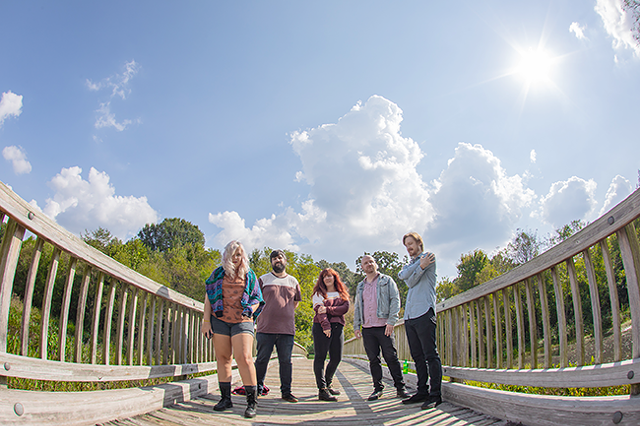 The band's positive relationship with the other groups in the Charlotte scene cultivates a culture of support and appreciativeness in the community. They've played alongside other popular local bands like Hectorina, Cuzco, Julian Calendar and Late Bloomer.

"I like the community aspect of it, like just the fact that we can share a showbill with some of our friends and we compliment each other on each other's music," Pucci said.

But it's fun for them to experience a variety of music when they attend a show, whether Pullover is in the lineup or not, as they draw inspiration from the bands that they see in Charlotte.

"My favorite kind of show — whether we're on the bill or not — is not the bands that all sound the same but an eclectic mix of four different bands," Smith said. "I draw a lot of inspiration from the local music scene."

However, when they are on the bill playing a show with other bands that they are friends with, and playing for the audience, it's an experience that's hard to find elsewhere. They've crowded their five members on a tiny stage, dripping in sweat while playing on top of one another and traveled to Raleigh to perform for a Naked Naps album release party despite all five of them being sick.

It's plain to see that there's an emotional draw that brings them to the stage every time.

For Pucci, specifically, it's emotionally relieving to perform live.

"Just the total catharsis of playing music is definitely unparallel for me in my life. There's something I get out of that that I don't get out of anything else that I do," he said.

It's emotional for the audience, as well. They've heard that it's more of a physical reaction of provoked thoughts and feelings before anything else.

"People have said people tend to feel our music, like in their whole body, you know what I'm saying?" Pucci said. "It's kind of a visceral reaction to it."

With their current lineup and the first record as Pullover on the horizon, the dream-punk-but-not band will continue to play with their friends, sharing lineups around the city and bringing back the '90s in their music.

[Correction: An original version of this story incorrectly stated that Alex Smith was a member for Serfs.]