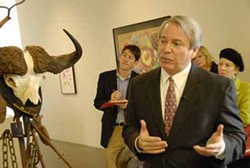 As The Bechtler Museum of Modern Art's grand opening approaches on Jan. 2, 2010, so does the anticipation of gazing upon its holdings. Andreas Bechtler's extensive 1,400-piece collection is an array of primarily mid-20th century modern European art, but it also features a variety of works by popular American artists.

Creative Loafing recently spoke with John Boyer, president and CEO of the Bechtler Museum of Modern Art, who shared information on the museum, as well as his own insights into its new home in Uptown Charlotte.

Creative Loafing: When was the idea for the Bechtler Museum of Modern Art originally conceived?

John Boyer: Well, the original concept for a museum and gallery space goes back to 2001. The first manifestation, in fact, was a design by Mario Botta, but not for Uptown. The initial design was for properties on a ... spec of land, north of town near Mountain Island Lake, N.C. Andreas Bechtler has an artist colony there with a number of studios where sculptures, painters, composers and other artists work, and he was originally going to build a museum out of that complex. So, it's interesting that it's the same collection, the same pictures, the same architect, and there was a dramatically different design. They were only a couple months away from breaking ground in 2002 and it was decided that they would start to have conversations with some of the leadership in town regarding the possibility of having the collection come to the city and become a part of this cultural campus, as it has. That agreement committed the collection to the city and to become part of the cultural campus. It was signed in September of 2006.

The Bechtler collection features 1,400 pieces of art. How will the art be rotating, and how many pieces will be in the museum when it opens?

When we open, the inaugural exhibition will present around 110 pieces from the collection and over time we will be presenting different kinds of exhibitions based on our holdings and then borrowing related collections from other institutions to tell the stories that we want to tell. But, the vast majority of works that you'll see here will always be from our collections. Some shows will be monographic and focus on a single artist; we'll do some that will focus on styles and movements; we might do shows that focus on particular media, like printmaking, sculpture, or decorative arts -- all of which are very strongly represented in the collection. Another idea is to take a single date and to look across the entire collection to try to represent to visitors the broad array of approaches that could have been seen in 1958 or 1941, and those would be wonderful shows.

Do you think, especially with the museum itself being placed near to Knight Theater, Mint Museum, and Harvey B. Gantt Center for African American Arts + Culture, that Uptown Charlotte will become a new hub for the arts?

Well I certainly think that it should. Charlotte has always had a lot of wonderful cultural assets, and now there are even more. I do think that we have a responsibility, the institutions themselves, but I think the community at large has a real responsibility and the opportunity to become a significant cultural destination for people across the region and across the Southeast and beyond. This kind of wonderful concentration of cultural amenities, performing arts, visual arts, not only here at South Tryon Street, but up and down Tryon Street, is a great asset to this community. By the way, I would also put in the NASCAR Hall of Fame, which ... I can see from my office. So, if somebody were to decide to come to Charlotte for the weekend, let's just say, they wouldn't be able to see everything. If they came as a family, between the Discovery Place and Levine Museum of the New South, and a variety of performances venues, like the N.C. Blumenthal Performing Arts Center, and with the Mint Museum, the Harvey B. Gantt Center for African American Arts + Culture, now The Bechtler Museum of Modern Art, and soon the NASCAR Hall of Fame, that is a very full weekend. You couldn't do it all in one weekend.