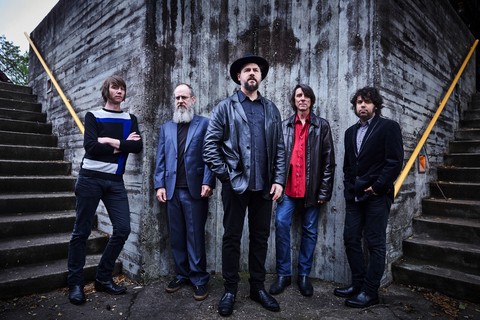 Drive-By Truckers perform at The Fillmore on Nov. 12.

In the run up to the 2016 presidential election, the Drive-By Truckers were praised for encapsulating the electorate's rage and angst with their latest LP, American Band. But now that President-elect Donald Trump is transitioning into the White House, the left leaning southern rockers' new songs have taken on a whole new resonance.

"I'd pondered all through the fall if this record was going to be something that no one would want to hear after the election, if it was going to be discarded. But all of the sudden I think it's taken on an extra relevance, which is unfortunate," frontman Patterson Hood tells Creative Loafing over the phone ahead of the Truckers' Nov. 12 show at The Fillmore.

"I've had more and more people writing me today saying they've been listening to this record for the past 24 hours and that they've gotten some kind of strength from it for what's going to be a pretty rough road ahead."

Below, Hood tells us more about how he's horrified but the forthcoming Trump era, and why he's still optimistic about the future.

Creative Loafing: The new album has gotten some of the best reviews of your career. How does that feel?

Patterson Hood: It's been pretty wonderful as far as the acclaim goes. Some records, despite how much you may have believed in what you were doing at the time, make you look back and think you could've done better. But this one was pretty magical to make all the way through. It was some really heartfelt shit that we were writing about and we were feeling pretty unified about how to make it. The making of it was joyous and we made it quickly — nine of the songs were recorded in the first three days of the sessions. So then to have it come out and hit a nerve was certainly gratifying.

How have the new songs been received live?

We opened the show last night with "Surrender Under Protest." And the crowd just kind of exploded when we walked out and did that. It was amazing to see the reaction it got. It's a very rocked up song, a song that lifts up the room in a way. Really on this tour the new songs get the best responses, and for a 20 year old band to be able to say that is kind of a blessing. I never felt like our best days were behind us, but I bet a year ago people thought we'd never be as relevant or good as we were 10 years ago. So it's been pretty amazing changing that perception about us.

Were many of these new songs inspired by your southern upbringing, or touring small towns in middle America or something else?

I've spent essentially the last 18 years of my life all over America. We tour heavily, 200 days a year, big and small towns. We still haven't played North Dakota but we've played every other continental state. All of that influences what we do. And we keep heavily abreast on current events but we're also history nuts, so we're pretty abreast on what led us to these current events. That's all figured into our work, there's been a political aspect to every record we've made, but this record was set in the contemporary here and now and steeped in things that are on a lot of people's minds, leading into to the election and now leading forward into this, 'what the fuck ever' is going to happen now.

So you think there's going to be a lot of good songwriting material during this new administration?

Unfortunately probably so, though I'd much rather write about something different. I'm not too optimistic about the short-term future. But I am optimistic about the long term, as I have been all along. And I'm hanging onto that. I saw a demographic map yesterday of the voting patterns of 18 to 25 year olds, and it's pretty stunning. The current red South was all blue states, there were only five red states in that demographic, and those were Kentucky, West Virginia, Idaho and Wyoming. They were the only red states in that age group. I was not expecting that at all. I knew the next generation would be more progressive, but I didn't expect for Mississippi or Alabama to be blue. And I was pretty taken aback, because four years from now that demographic will be 18 to 29, because the kids coming up behind today's 18-year-olds are no less progressive minded, judging by being around my kids and their friends. So I'm hopeful for the long term future, though in the short term it's going to probably suck.

What scares you the most about that short term future?

I'm pretty scared about some of the more violent elements out there, who are feeling empowered to let their Klan flag fly. I mean, when David Duke [See www.good.is/articles/david-duke-trump-victory] is openly congratulating the new president and crowing his feathers about the part he played in the election, that's pretty fuckin' scary to me. I grew up in Alabama, and I saw all that shit and what it leads to. I saw the state that I grew up in basically destroy itself over racism. And the thought of that on a national scale, and having someone at the top who makes that look like it's okay, is not fucking acceptable to me. That's what's preoccupying me today.

Were you a first hand witness to riots and violence in Alabama as a boy or was it more subtle?

In my hometown it was pretty peaceful, though there were a handful of incidents. And my Dad stood in opposition to all that. He was playing bass guitar on soul records with Aretha Franklin and Wilson Pickett and Bobby Womack and Etta James, in Alabama while all that was going on. But I have friends in Birmingham who certainly saw a lot of that shit first hand. I have a really good friend who was writing for the Birmingham Post-Herald during the height of civil rights, and the firehoses and dogs, I've grown up hearing those stories.

And I've grown up going to Birmingham for rock concerts. It was the nearest city to where I grew up, and going there in the 80's, it was a town of economic and cultural despair. It was super dangerous, and I've watched it rebound and rebuild in some really wonderful ways over the past 20 years. I think it's one of the most underrated cities in America, and yet they're still living down the legacy of what happened there, as is Memphis. So the thought of seeing that on a national scale is horrifying.

But when you mention how Birmingham rebounded, does that give you hope for the overall future of America as well?

Yeah but it's taken 40 years. I'm not going to live that long. I'm a musician man, we don't usually live to be 100. I worry about what we're handing over to our kids.

Speaking of kids and legacies, do you have fans of all ages at your shows now that you've been performing for 20 years? Are there dads in the front row with the kids?

Absolutely, we have a lot of that. There are kids that I've watched grow up in our audience, and that's amazing to see.

And aside from the current Truckers tour you also have some solo dates [www.pattersonhood.com] coming up?

Yeah, I'm doing a handful of dates after this leg of the tour, mostly near where I'm living around Portland. It's fun to go do that— the juxtaposition between that and what we do with the band is great, because it's a chance for me to sit down with an acoustic guitar and tell the stories and play the songs in their most stripped-down form. The personal interaction you get with the audience during those types of shows is rewarding. I might not be happy if that's all I got to do, though there might come a time when it's all I can do. But for now I'd miss the cathartic release of going out and playing the rock show, because it's big and sweaty. After our two-and-a-half-hour rock shows I'm very physically exhausted. I'd miss that. But as far as going out for a week or two, here and there, doing the intimate thing is great.

The Truckers shows must be especially cathartic this time, not only because of the new songs' lyrics but also on a musical level, because so many of them rock so hard.

It's very, very fun to play this record. Generally the show is built around the newest record, and some songs flow better together in that context, and lately the shows have been gravitating toward a higher energy vibe compared to any tour we've done in a long time, maybe ever. A lot of our shows lately are two-and-a-half hours and we play 30 songs in that amount of time, and there's probably times in the past when a two-and-a-half-hour show would be 24 songs, so it's very action-packed now. And when the audience leaves that I think they're pretty drained too, which is good. It's good to get your blood pumpin'.

That's a long time, it's like your Bruce Springsteen up there.

Whoo! (laughs). That guy's crazy. He just broke the four hour mark the other day. That's crazy, no way. The set we're doing is long enough. We have a big catalogue, and there's certain early songs the fans want to hear, but at the same time we're here to play the new stuff, and we're lucky that we have new stuff that the fans are really excited to hear. So the fans are getting a lot of bang for their buck. It's a good time for the Truckers, even if it's a questionable time for the country.

In regards to bang for your buck, I wanted to let you know that listening to "Ever South," earlier today made me weep like a baby and I haven't been that moved by a song in years.

Well, thank you. You know the inspiration for that song is homesickness. I moved to the northwest with my family recently. Homesickness is something that I've gotten really, really good at — I've been on the road since 1998 and I've been essentially homesick since then. I'm good at dealing with it, I'm good at channeling it. But my family was completely unprepared and blindsided by it. They were into the move, and my wife was spearheading the move, but we got there and it never really dawned on me that she's never been more than an hour from her family before. And she was just paralyzed by it. I watched the other three people in my house openly grieving over the homesickness, all the while trying to start this new life, and loving a lot of it. So that was really heavy on my mind when I wrote that song, what you take with you and what you leave behind. And that applies no matter where you're from, or where you go to.