His place is spot on for the times

Wolfgang Puck's food and I go way back. At his dazzling Postrio (circa 1993), an elegant emporium in San Francisco with towering flower arrangements and just-sourced local foods, I sampled the Chinese duck with a peach ginger sheen. The menu item let food lovers know that the Austrian chef who had launched the iconic Spago in Los Angeles could take on the City by the Bay's food scene as well.

Today, Puck, one of the original celebrity chefs, seems to be everywhere — on shelves in bookstores and grocery stores; among kitchen supplies; on television; online; and in his growing list of restaurants throughout the United States. One of those locations is Phillips Place in Charlotte, where the Wolfgang Puck Pizza | Bar recently opened. 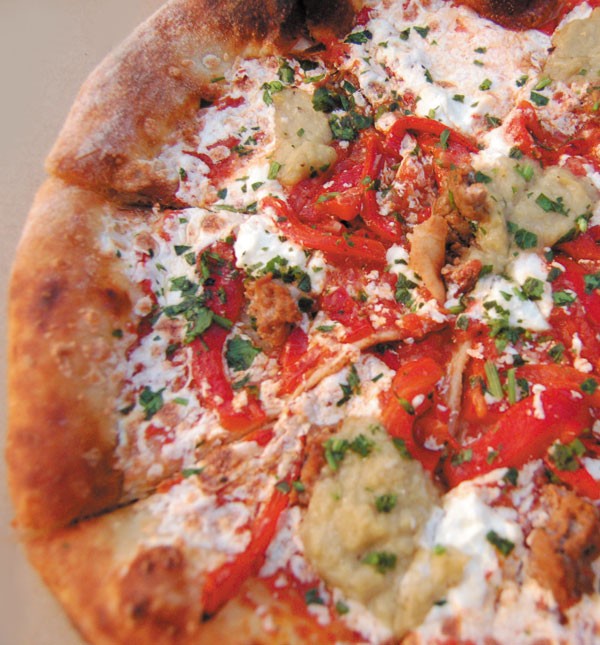 The 113-seat establishment is the first of its concept nationally. Designed by EDG Interior Architecture + Design of San Rafael, Calif., the back-to-the-ranch/farm interior features hewn and finished woods, Edison light bulbs, a glassed-in kitchen, cushy banquettes, an immense 20-seat bar, and an eight-top communal table. The rustic theme expresses itself in the servers' uniforms as well: blue gingham shirts, crisp jeans, and white aprons. Some female servers sport the one-sided Katniss braid. The servers' look is so Americana that nary an eyebrow would be lifted if the staff broke out in the "Oh, the farmers and the cowboys can be friends" refrain from Oklahoma, choreographed, of course, with adroit servers side-stepping sizzling cast irons skillets being ferried to oohing customers.

At the helm of this kitchen is the talented Scott Wallen, featured in CL's 2005 Food Issue as one of the up-and-coming chefs in town. Wallen, a Culinary Institute of America graduate, is the former executive chef for Harper Restaurants, and also worked for Puck in Chicago and Las Vegas.

The menu is simple: sharable starters, pizzas, pastas and specials. The wine list is short, but well-chosen. Many of the flavors will be familiar to those who have been fans of Puck. His perfectly textured pizza dough shines through the restaurant's 17 pies. The house-smoked salmon pizza with thinly sliced red onion and dill crème fraîche became famous at Spago Beverly Hills. (That restaurant is closed for remodeling and will reopen with a "new" menu.) Also familiar is the house-made lamb sausage I had at Postrio, now on a pizza showered with a goat cheese, eggplant and red pepper.

Pasta entrées are satisfying in a familiar, old-fashioned way: Thin ribbons of linguini entangle rock shrimp and clams, while the cavatappi and rosemary chicken is studded with wild mushrooms and peas. Fill the table, though, with items from the starters: the wonderfully lavish tray of San Daniele prosciutto paired with creamy Burrata cheese, sweet melon, and punched up with peppery arugula, or salads crackling with toasted bits of potatoes and pancetta, or thinly veiled with garlic dressing. Many ingredients, such as the greens, cheeses and the polenta from the historic Old Mill of Guilford, are locally and regionally sourced. Desserts, like the lighter-than-expected peach cobbler, are equally worthy variations on the rustic theme.

Pizza Bar is Puck's ready-to-wear line, featuring an easily pleasing menu with combinations that do not explore or push boundaries, but are conspicuously fresh and flavorful with low-risk 2012 prices.